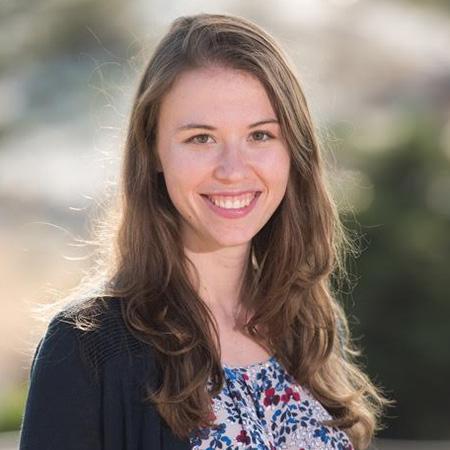 Tools that may make it possible to noninvasively track the brain activity of patients with neurological disorder and tailor treatments according to patients’ cell types are among the work of the 2019 Fannie and John Hertz Foundation Thesis Prize winners, Jenny Schloss and Sam Rodriques.

Working at the intersection of physics, electrical engineering, and neuroscience, Jenny Schloss and her colleagues developed a high-sensitivity magnetic field sensor that she hopes will provide a new way of sensing the subtle dynamics of our brains.

For her thesis, “Optimizing Nitrogen-Vacancy Diamond Magnetic Sensors and Imagers for Broadband Sensitivity,” Schloss brought to fruition a decade-long quest to listen in on neural activity using microscopic impurities in diamonds, work that has implications for studying neurodegenerative diseases and monitoring drug delivery in real time.

“When I started grad school, I had some uncertainty about my research path,” said Schloss, who earned her undergraduate degree in physics at Oberlin College before starting her doctoral program at the Massachusetts Institute of Technology. “Being awarded the Hertz Fellowship gave me a huge confidence boost.”

That confidence, along with the fellowship’s financial support, helped her refine her interests and ultimately move to a new lab midway through her degree. “Having the Hertz Fellowship made the process much easier, because I could tell professors I was bringing my own funding with me,” she said. “It really opened up a lot of doors.”

The group she landed with at Harvard University, led by Ron Walsworth, was working to exploit magnetic-field sensing capabilities of atomic-scale defects in diamonds called nitrogen vacancy (NV) centers, whose properties Walsworth and colleagues initially described a decade earlier. One idea the team explored was using the NV centers to detect magnetic fields from firing neurons as a way to noninvasively observe the brain activity inside freely moving animals.

Schloss and her colleagues developed a high-sensitivity magnetic field sensor, using a trillion NV centers contained in a 4-millimeter-square wafer of diamond, that allowed them to record neural activity from isolated squid giant axons and, later, in live, intact marine worms. Although Schloss improved the technique to work with progressively larger groups of firing neurons, more work is needed to measure neural activity in awake, behaving mammals, she said.

Among Sam Rodriques’s results, detailed in his thesis, “Mapping Cell Types, Dynamics, and Connections in Neural Circuits,” are a novel nanofabrication technique, new approaches to brain mapping, and a new method for sequencing proteins.

After receiving his bachelor’s degree from Haverford College and master’s degree from the University of Cambridge as a Churchill Scholar, Rodriques pursued his PhD at the Massachusetts Institute of Technology. He worked in the Media Lab with Hertz Fellow Ed Boyden (’99), who has developed some of the most important neuroscience techniques of the past two decades, including expansion microscopy, the process of expanding a biological specimen’s nanoscale features to a size where they can be seen using conventional microscopes. This technique prompted Rodriques to ask, “What if we could make things smaller instead?”

Rodriques reversed the expansion microscopy method, shrinking normal-size objects to miniscule objects with nanoscale features. The resulting process, dubbed “implosion fabrication,” can reduce the volume of objects 1,000-fold, a technique that may be used to pack an enormous number of sensors into devices that monitor electrical activity in the brain, for example.

Rodriques next focused on determining where proteins are created within tissue samples, information that may be useful for drug development. For this research, he worked with Evan Macosko and Fei Chen at the Broad Institute of Harvard and MIT. “Thanks to the Hertz Fellowship, I was able to move seamlessly between different labs and work on the most important science to me at every step, as opposed to having to worry about politics or who’s paying for the research,” he said.

To preserve information about where proteins are made within tissues, Rodriques and his colleagues developed a technique called Slide-seq, a technique where a tissue sample is laid on a bed of barcoded beads. The unique barcodes attach to corresponding bits of genetic material in the tissue that produce specific proteins. The tissue is then dissolved, leaving only the barcoded beads, allowing researchers to generate high-resolution maps of protein production and cell type within the tissue. The tool has a range of applications, from basic developmental biology to creating drugs tailored to match patients’ specific cell types.

Rodriques also created a tool to track when proteins in a cell are made. This information can help researchers better understand how cells respond to changes in the environment, helping pinpoint, for example, at what point a cancer drug begins to have its desired effect on cells within a tumor.

Rodriques is now setting up his own lab, the Applied Biotechnology Laboratory, at the Francis Crick Institute in London.

The Fannie and John Hertz Foundation identifies the nation’s most promising innovators in science and technology, and empowers them to pursue solutions to the world’s toughest challenges. Launched in 1963, the Hertz Fellowship is the most exclusive fellowship program in the United States, fueling more than 1,200 leaders, disruptors, and creators who apply their remarkable talent where it’s needed most–from improving human health to protecting the health of the planet. Hertz Fellows hold 3,000+ patents, have founded 200+ companies, and have received 200+ major national and international awards, including two Nobel Prizes, eight Breakthrough Prizes, the National Medal of Technology, the Fields Medal, and the Turing Award. Learn more at https://HertzFoundation.org.