The ever-changing brain: Shining a light on synaptic plasticity 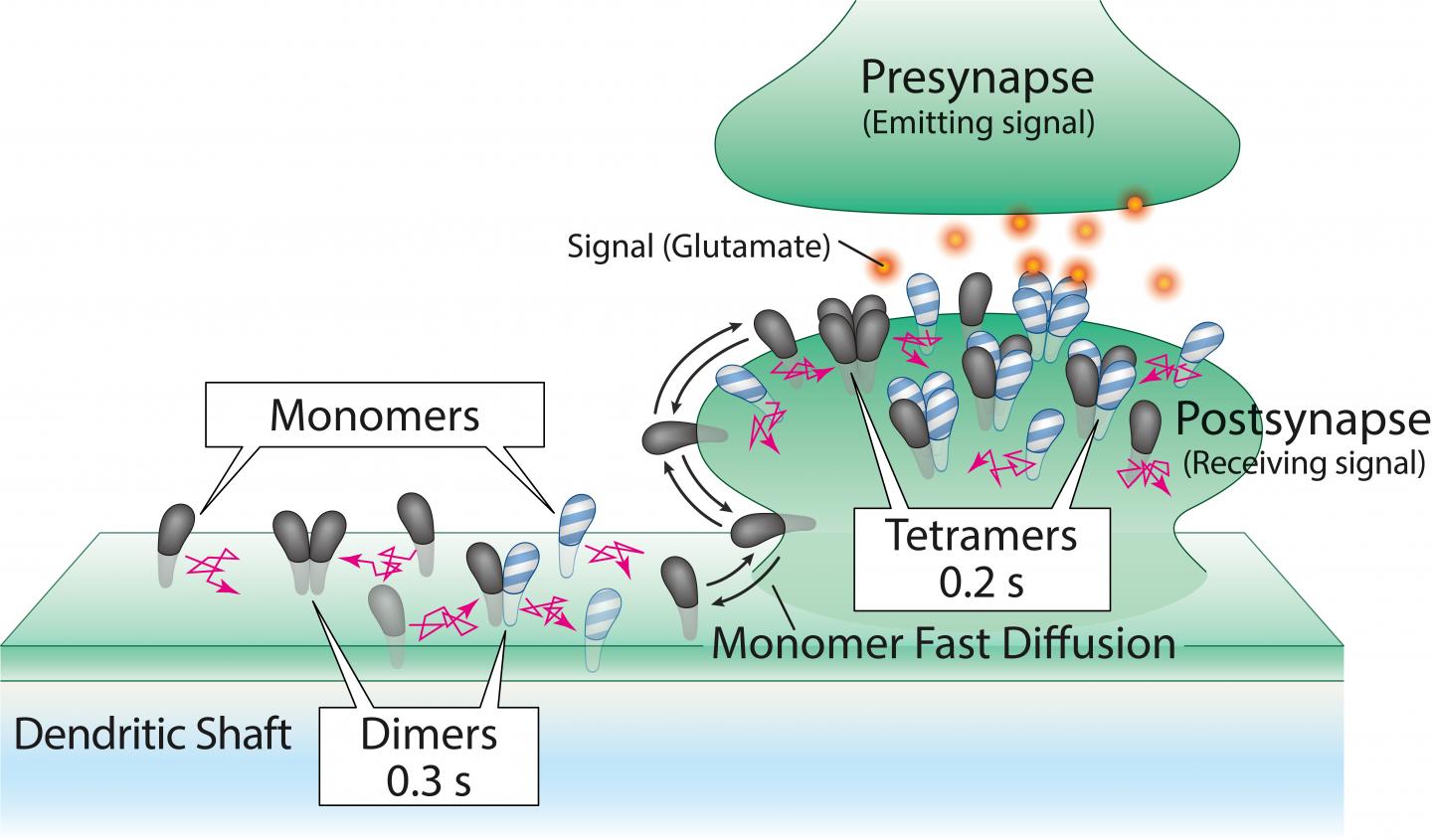 Synapses – specialized structures in neurons – allow these nerve cells to communicate with one another. In the synapse, one neuron emits chemical messengers called neurotransmitters, and an apposed neuron receives them using tiny structures called receptors.

A specific type of receptor, the AMPA receptor, plays a crucial role in learning and memory processes. However, scientists don’t yet fully understand how these AMPA receptors form and work.

Now, researchers in the Membrane Cooperativity Unit at the Okinawa Institute of Science and Technology Graduate University (OIST) in Japan, in collaboration with researchers from universities across Japan, have found that AMPA receptors form and disintegrate continually, within a fraction of a second, rather than existing as stable entities. The scientists’ findings, published in Nature Communications, may help clarify early stages of synaptic plasticity: neural activity that is key for learning and memory. The research may also have pharmacological applications in the treatment of epilepsy.

AMPA receptors are composed of four molecules, or subunits – called GluA1, 2, 3, and 4 – which unite to form structures called tetramers. Different combinations of the subunits form the tetramers; this means there are 256 possible configurations of AMPA receptor.

Scientists have long believed that these tetramers originate in the endoplasmic reticulum, the cell’s “manufacturing center,” before migrating to the synapses, all while retaining stable structures for hours or even days.

“This tetramer stability could actually be problematic for neurons,” said Professor Akihiro Kusumi, a co-author of the study. “The synapses need AMPA receptor tetramers with different combinations of subunits as the brain learns and its neuronal circuits change. Thus, we had a gut feeling that something was terribly wrong with the accepted notion of how AMPA receptors form, migrate, and work.”

Looking at AMPA receptors in motion at single-molecule resolutions

Following this intuition, the researchers put fluorescent tags on each individual subunit molecule of the AMPA receptors. Then, they tracked the molecules’ movements in live cells at nanometer-precisions. They used a single-molecule fluorescence microscope and software to analyze the motion of the single molecules, a method Kusumi and his colleagues pioneered.

Tetramers were found, but they fell apart in about 0.1 to 0.2 seconds. Then, however, the separated molecules found other partner molecules to form new assemblies of two, three, and four molecules again, continually repeating this process.

In addition, the researchers found that when the molecules formed tetramers, albeit briefly, they worked as tiny channels that opened for less than 0.1 seconds.

Since the functional tetramers are continually broken up to form new tetramers, AMPA receptor tetramers with different subunit compositions can readily be formed. This represents a novel mechanism for synaptic plasticity.

Kusumi noted that the team’s findings may have medical applications. Individuals with epilepsy have an excess of glutamate, the neurotransmitter that binds to AMPA receptors in the brain. These individuals are often treated with anticonvulsants that stop glutamate from binding to AMPA receptor tetramers, but these treatments can be too overpowering, and therefore ineffective.

Kusumi believes the development of drugs that slow down the formation of tetramers with certain subunit compositions in the brain could mitigate problematic types of synaptic plasticity, thus diminishing the symptoms of epilepsy.

No place like home: Species are on the move, but many have nowhere to go

Scienmag Oct 21, 2019
Many insects moving north in response to climate change find they have nowhere to go in Britain's intensively…