The consequences of mating at the molecular level 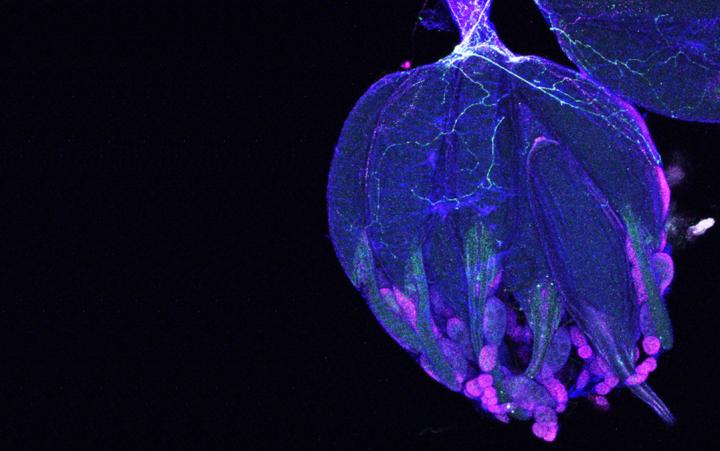 Tsukuba, Japan – While it is known that stem cells have the ability to develop into all tissues in a precisely regulated process, the way environmental cues affect stem cell behavior has remained poorly understood. In a new study, researchers from the University of Tsukuba discovered that neurons producing the neurotransmitter octopamine regulate the behavior of germline stem cells (GSCs) in response to environmental cues, such as mating.

The ovaries of the fruit fly Drosophila melanogaster have been a robust model system for studying the relationship between environmental cues and stem cell biology. In fruit flies, GSCs give rise to eggs and exist in close proximity to somatic cells. Somatic cells comprise several types of cells in support of the budding eggs. As with other stem cells, when GSCs divide, one daughter cell retains its stem cell identity, while the other differentiates into multiple progeny cells. The balance between self-renewal and differentiation is tightly regulated, both by cues within and outside the environment in which GSCs reside (also called a niche). Mating is one such external cue known to increase GSCs.

“It is well known that a molecule called sex peptide from the male seminal fluid activates neurons located in the uterine lumen. We have previously shown that these neurons are essential for stimulating the biosynthesis of ovarian steroid hormones to increase the number of GSCs,” says corresponding author of the study Professor Ryusuke Niwa. “The goal of our study was to investigate how the information from mating is transmitted from these neurons to GSCs at the molecular and cellular levels.”

To achieve their goal, the researchers took a genetic approach to investigate which gene is responsible for the increase of GSCs upon mating, and found that the octopamine receptor Oamb is the one through which octopamine exerts its effect on GSCs. Through a series of experiments, the researchers then found that Oamb in escort cells, one type of somatic cell adjacent to GSCs, modulates GSC increase after mating and the subsequent release of octopamine by neurons. At the molecular level, Oamb activation by octopamine resulted in an increase in calcium signaling in escort cells. Calcium is a potent biomolecule and changes in cellular calcium levels strongly affect cell behavior.

“These are striking results that show the molecular mechanism underlying the coupling of the nervous system with stem cell behavior in response to environmental cues, such as mating,” says Professor Niwa. “Our results could help unravel the conserved systemic and neuronal regulatory mechanisms for stem cell homeostasis in animals.”