A collaborative study published in PLOS ONE,  documents the periodic disappearance (and reappearance) of white-lipped peccaries in nine countries in South and Central America. The authors say the population fluctuations may represent the first documented case of natural population cyclicity in a Neotropical mammal. 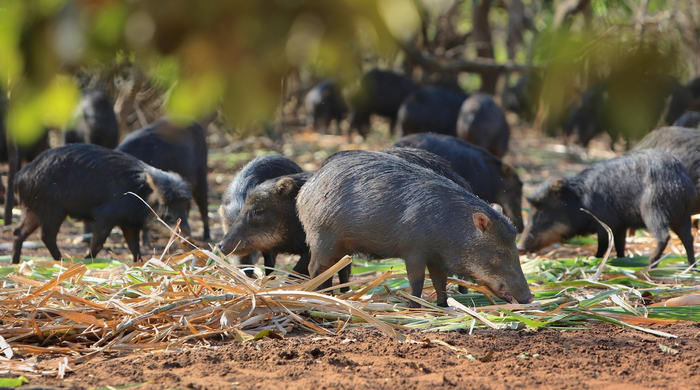 A collaborative study published in PLOS ONE,  documents the periodic disappearance (and reappearance) of white-lipped peccaries in nine countries in South and Central America. The authors say the population fluctuations may represent the first documented case of natural population cyclicity in a Neotropical mammal.

The study is led by the Departamento de Zoologia, Universidade de Brasilia, and co-authored by more than 20 other organizations including the Wildlife Conservation Society (WCS).

White-lipped peccaries (Tayassu pecari) are pig-like hoofed mammals native to the tropical forests of Central and South America. They are extremely social, forming large herds of up to hundreds of animals. Peccary researchers from Mexico to the Amazon have been intrigued by the sudden disappearance of white-lipped peccary populations across large areas, as well as reports of previous disappearances and subsequent reappearance.

The study shows that over 20–30-year population cycles, the disappearances represent seven-to-twelve-year troughs when peccaries vanish. These can occur simultaneously at regional and perhaps continent-wide spatial scales as large as 10,000–5 million square kilometers (3,861-1.9 million square miles).

The study suggests that the mysterious disappearances may be triggered by populations growing too big, and crashes are likely facilitated by different causes, including disease outbreaks, and underscores the need for more long-term studies to better understand the causes.

The ground-breaking study, which relies on collaboration and detective work to document 43 different disappearances at 38 sites in nine countries, also incorporates 88 years of commercial and subsistence harvest data from the Amazon. It confirms that this poorly-known species which is so ecologically important to neotropical forests, as well as culturally and socio-economically crucial to the Indigenous Peoples and local communities who live in these forests, has large-scale and long-term population cycles.

From an ecological perspective, the white-lipped peccaryis considered a keystone species as they influence forest regeneration and plant populations, especially palms, through seed predation and foraging and turnover of leaf litter. They are also considered ecological engineers through their maintenance and expansion of forest mineral licks and wallows, which benefit many other wildlife species. In addition, they are the preferred prey of Latin Americas’ apex predator, the jaguar (Panthera onca). When peccaries disappear, jaguar populations decline.

White-lipped peccaries are immensely important from a socio-cultural perspective, as a preferred subsistence hunting target for Indigenous Peoples and riverine and rural communities across their range. This significance is reflected in the stories, oral history and art of many of Latin America’s Indigenous Peoples. Indeed, some Indigenous Peoples have stories which refer to the peccaries disappearing and reappearing.

Senior author Dr. Mariana Altricher, from the Environmental Studies Department, Prescott College, Arizona, believes that “this work clarifies an enduring mystery in tropical forests. It will help guide future research and conservation efforts in the tropics. Most importantly we must continue to monitor peccary populations, especially in fragmented protected areas”.

Dr. Harald Beck, Co-Chair of the IUCN Peccary Specialist Group, and one of the authors of the study, said: “This unique publication has a large-scale focus (Central and South America), utilized historical and current data, and state of the art new modeling methods to answer critical ecological questions about the spatial-temporal population fluctuations of the dominant Neotropical mammal, the white-lipped peccary. The paper will guide future research in the Neotropics, as well as influence conservation efforts and policies.”

Dr. Rob Wallace, Senior Conservation Scientist at WCS and one of the co-authors of the study remarked: “WCS remains committed to landscape-scale conservation at a series of Nature’s Strongholds in Latin America, which is fundamental for wide-ranging species like the white-lipped peccary, especially considering these population cycles. Understanding these natural population cycles will be crucial for interpreting our population monitoring efforts, which represents the gold standard for evaluating our conservation impact, not just for white-lipped peccaries themselves as a keystone species and socio-cultural touchstone, but also the other wildlife with which they coexist – lowland tapir, collared peccaries, leaf litter biodiversity, a number of palm species, plant diversity, and, of course, the jaguar.”

Large-scale population disappearances and cycling in the white-lipped peccary, a tropical forest mammal