The brain employs an alarm system to suppress intrusive thoughts

Forget what you saw: a brain region detects when you are about to think of an unwanted memory and alerts other regions to suppress it, according to research recently published in JNeurosci. 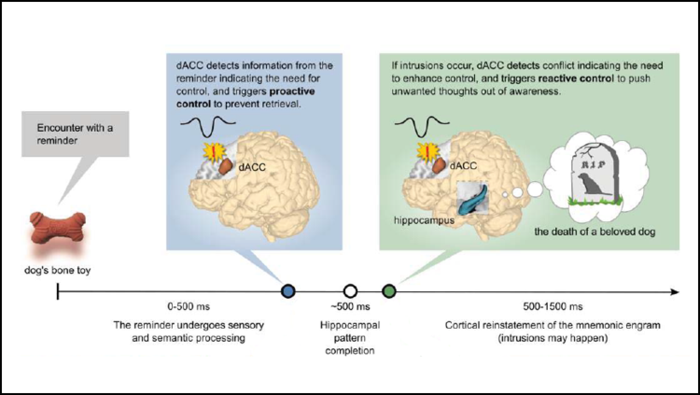 Forget what you saw: a brain region detects when you are about to think of an unwanted memory and alerts other regions to suppress it, according to research recently published in JNeurosci.

Crespo García et al. measured participants’ brain activity with both EEG and fMRI while they completed a memory task. The participants memorized sets of words (i.e., gate and train) and were asked to either recall a cue word’s pair (see gate, think about train) or only focus on the cue word (see gate, only think about gate). During proactive memory suppression, activity increased in the anterior cingulate cortex (ACC), a brain region involved in cognitive control, within the first 500 milliseconds of the task. The ACC relayed information to the dorsolateral prefrontal cortex (DLPFC), which then inhibited activity in the hippocampus, a key region for memory recall. The activity levels in the ACC and DLPFC remained low for the rest of the trial, a sign of success — the memory was stopped early enough so no more suppression was needed. If the memory was not suppressed in time, the ACC generated a reactive alarm, increasing its activity to signal to the DLPFC to stop the intrusion.

JNeurosci, the Society for Neuroscience’s first journal, was launched in 1981 as a means to communicate the findings of the highest quality neuroscience research to the growing field. Today, the journal remains committed to publishing cutting-edge neuroscience that will have an immediate and lasting scientific impact, while responding to authors’ changing publishing needs, representing breadth of the field and diversity in authorship.