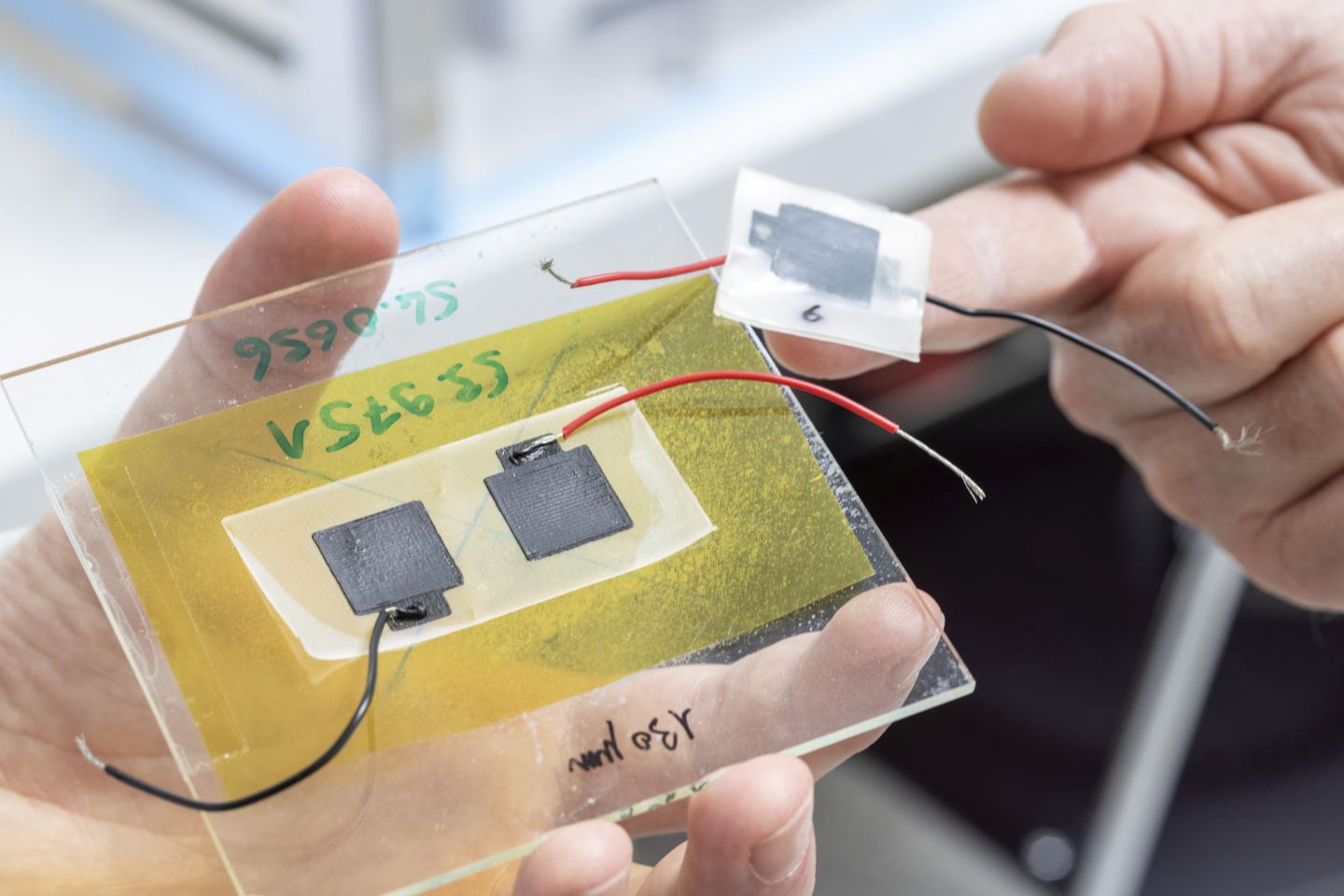 The fabrication device for the battery revolution looks quite unconspicuous: It is a modified, commercially available 3D printer, located in a room in the Empa laboratory building. But the real innovation lies within the recipe for the gelatinous inks this printer can dispense onto a surface. The mixture in question consists of cellulose nanofibers and cellulose nanocrystallites, plus carbon in the form of carbon black, graphite and activated carbon. To liquefy all this, the researchers use glycerin, water and two different types of alcohol. Plus a pinch of table salt for ionic conductivity.

A sandwich of four layers

To build a functioning supercapacitor from these ingredients, four layers are needed, all flowing out of the 3D printer one after the other: a flexible substrate, a conductive layer, the electrode and finally the electrolyte. The whole thing is then folded up like a sandwich, with the electrolyte in the center.

What emerges is an ecological miracle. The mini-capacitor from the lab can store electricity for hours and can already power a small digital clock. It can withstand thousands of charge and discharge cycles and years of storage, even in freezing temperatures, and is resistant to pressure and shock.

Best of all, though, when you no longer need it, you could toss it in the compost or simply leave it in nature. After two months, the capacitor will have disintegrated, leaving only a few visible carbon particles. The researchers have already tried this, too.

“It sounds quite simple, but it wasn’t at all,” says Xavier Aeby of Empa’s Cellulose & Wood Materials lab. It took an extended series of tests until all the parameters were right, until all the components flowed reliably from the printer and the capacitor worked. Says Aeby: “As researchers, we don’t want to just fiddle about, we also want to understand what’s happening inside our materials.”

Together with his supervisor, Gustav Nyström, Aeby developed and implemented the concept of a biodegradable electricity storage device. Aeby studied microsystems engineering at EPFL and came to Empa for his doctorate. Nyström and his team have been investigating functional gels based on nanocellulose for some time. The material is not only an environmentally friendly, renewable raw material, but its internal chemistry makes it extremely versatile. “The project of a biodegradable electricity storage system has been close to my heart for a long time,” Nyström says. “We applied for Empa internal funding with our project, Printed Paper Batteries, and were able to start our activities with this funding. Now we have achieved our first goal.”

Application in the Internet of Things

The supercapacitor could soon become a key component for the Internet of Things, Nyström and Aeby expect. “In the future, such capacitors could be briefly charged using an electromagnetic field, for example, then they could provide power for a sensor or a microtransmitter for hours.” This could be used, for instance, to check the contents of individual packages during shipping. Powering sensors in environmental monitoring or agriculture is also conceivable – there’s no need to collect these batteries again, as they could be left in nature to degrade.

The number of electronic microdevices will also be increasing due to a much more widespread use of near-patient laboratory diagnostics (“point of care testing”), which is currently booming. Small test devices for use at the bedside or self-testing devices for diabetics are among them. “A disposable cellulose capacitor could also be well suited for these applications”, says Gustav Nyström.