Predators may keep prey populations healthy by acting as a selective force against genetic diseases. A new study found that wolves select adult moose based on age and osteoarthritis, a chronic disease that can be influenced by genetics. Wolves also showed a strong preference for elderly moose over prime-aged adults. The results indicate that wolves play an important role in keeping prey populations healthy and have considerable implications for the conservation management of predator and prey populations. 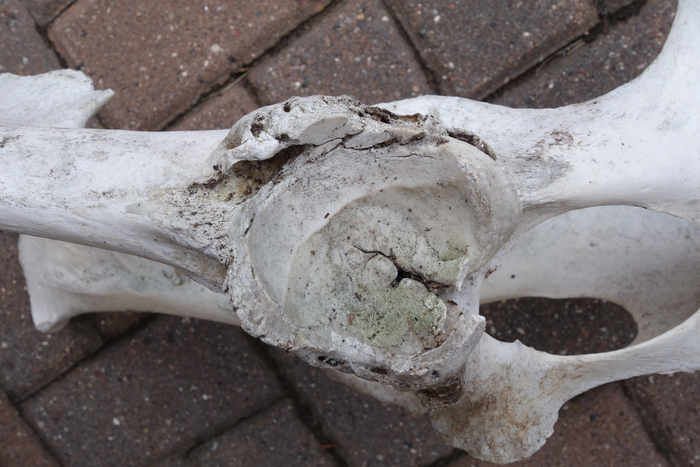 Predators may keep prey populations healthy by acting as a selective force against genetic diseases. A new study found that wolves select adult moose based on age and osteoarthritis, a chronic disease that can be influenced by genetics. Wolves also showed a strong preference for elderly moose over prime-aged adults. The results indicate that wolves play an important role in keeping prey populations healthy and have considerable implications for the conservation management of predator and prey populations.

Over the last decade, wolves have been at the center stage of conservation news. They were once one of the most widely distributed wild mammals on Earth. But after decades of habitat destruction and human persecution, wolves now only occupy about two thirds of their former range.

Now, the wolf is making a comeback. The US has seen an increase in their wolf populations across the country, and extensive conservation efforts have led to a comeback across Europe. Yet their return has not been well-received by everyone. Predators may lead to human-wildlife conflicts, as wolves can pose a threat to livestock and pets.

Even so, multiple case studies, such as the reintroduction of wolves in Yellowstone, have shown that the presence of wolves favors ecosystem health. Wolves keep prey populations, such as deer, elk, and moose, in check, which benefits vegetation. Carcasses left behind by wolves provide food for other animals such as scavengers and redistribute nutrients.

A new study published in Frontiers in Ecology and Evolution found another way in which wolves may be beneficial for biodiversity: selective predation. Wolves preyed more on prime-aged adult moose with osteoarthritis than healthy prime-aged individuals. Wolves also showed a strong preference for elderly moose over prime-aged adults.

Selective predation means that a particular type of prey occurs more frequently in a predator’s diet than what is expected based on the prey type’s frequency in an environment. Predators tend to select individuals that are easier or less risky to hunt.

Selective predation can have important impacts on prey population dynamics. Prey population growth rates are less impacted by predation when predators go for juveniles or elderly adults, as these individuals have lower reproductive values.

Less well understood is the impact of predation of sick individuals on prey population health.

“Wolf biologists have in the past assumed that wolves play an important role in regulating the health of prey populations by selectively removing old or diseased animals,” said Dr Sarah Hoy, of Michigan Technological University. “However, a rigorous assessment of that idea has not been tested until now.”

Hoy and her colleague assessed the extent that wolves select adult moose on the basis of age-class and osteoarthritis.

“Osteoarthritis is a progressively crippling disease caused by deterioration of cartilage on the surfaces of moveable joints (for example, knees and hip joints),” explained Hoy. “As individuals get older, they are more likely to develop osteoarthritis and develop more severe forms of the disease.”

They also examined how temporal variation in kill rates were associated with the subsequent incidence of osteoarthritis in the moose population over a 33-year period.

“When it comes to wolves and moose, it makes a lot of sense that wolves would preferentially target moose that are in poorer condition because adult moose weigh between 800 and 900lbs which is between eight and 10 times as heavy as a wolf,” said Hoy.

They found that wolves showed strong selection for elderly moose and avoided prime-aged adults. The presence of severe osteoarthritis, but not mild or moderate, increased the vulnerability of prime-aged moose to predation.

“But the situation is different for older moose. While older moose are more vulnerable to predation, that vulnerability does not strongly depend on whether an old moose has osteoarthritis,” explained Hoy.

They also found that the incidence of osteoarthritis in the moose population declined following years with higher kill rates.

“The decline in osteoarthritis following years with more predation is – we think – because wolves preferentially removed moose with osteoarthritis from the population,” said Hoy.

The results have important implications for wolf management and conservation. Hoy explained: “The management and conservation of wolves is controversial among the public. Yet our results suggest wolves might be an effective, natural, and more ethical way of regulating the health of deer and moose populations – as opposed to using culls or recreational hunting to reduce the incidence of diseases or parasites of concern.”

“The results are also relevant for policy-related arguments about reasons to refrain from intensively hunting wolf populations,” continued Hoy.

“When deciding whether to hunt wolves it is important to not only consider issues that may be caused by wolves (ie, occasional predation of livestock) but to also consider the important ecological benefits that wolves may provide by removing old and diseased animals from the populations.”

Frontiers in Ecology and Evolution