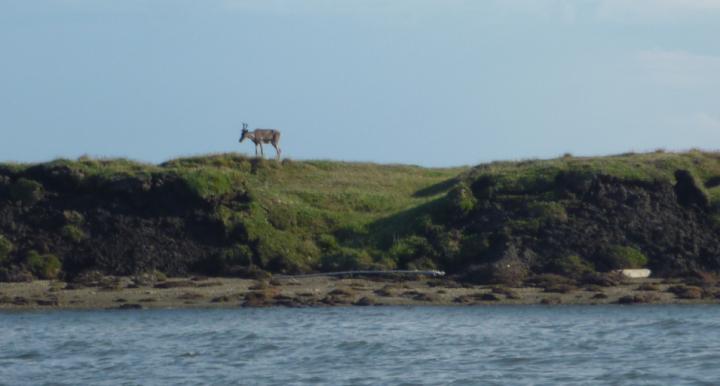 AMHERST, Mass. – A new analysis of the changing character of runoff, river discharge and other hydrological cycle elements across the North Slope of Alaska reveals significant increases in the proportion of subsurface runoff and cold season discharge, changes the authors say are “consistent with warming and thawing permafrost.”

First author and lead climate modeler Michael Rawlins, associate professor of geosciences at the University of Massachusetts Amherst and associate director of its Climate Systems Research Center, says warming is expected to shift the Arctic from a surface water-dominated system to a groundwater-dominated system, with deeper water flow paths through newly thawed soils.

“Our model estimates of permafrost thaw are consistent with the notion that permafrost region ecosystems are shifting from a net sink to a net source of carbon,” he says.

Freshwater and riverborne nutrients, mainly dissolved organic carbon, are transported to coastal estuaries and lagoons that lie at the land-sea interface, he explains. Field measurements of river discharge and other hydrological cycle elements in this region are sparse, which requires a modeling approach to quantify the land-ocean flows and their changing character. Details of this investigation into Arctic watersheds between Utqiagvik (formerly Barrow) and just west of the Mackenzie River over the period 1981-2010 are in the current issue of the open access journal, The Cryosphere.

Rawlins explains, “Our model includes a state-of-the-art simulation of soil freeze-thaw cycles that allows us to better understand how permafrost thaw is influencing the magnitude and timing of hydrological flows. Our results point to greater impacts of warming across the Brooks Range, including increasing cold season (November to April) river discharge and a higher proportion of subsurface runoff.”

Further, the changing terrestrial inflows may be influencing food web structure within the lagoons, he adds. “Local native communities rely on the fish and other resources in the lagoon ecosystem for their subsistence lifestyle. More than 150 species of migratory birds and waterfowl are supported by the region’s food webs, and the lagoons are a rich source of fish for native communities.” In particular, Barrow, Nuiqsut and Kaktvik hunters and residents rely on the high productivity of the Beaufort Lagoon systems to support fish and bird populations they live on, Rawlins points out.

In this study, the Permafrost Water Balance Model was validated against available measurements of river discharge and water held in the snow pack. Rawlins and colleagues are developing models and leveraging in situ and remote sensing measurements to better understand flows into the Beaufort Lagoons and predict how permafrost thaw and water cycle intensification will affect lagoon ecosystem dynamics in the future.

The researchers observed significant increases in cold season discharge, such as 134% of the long-term average for the North Slope, and 215% in the Colville River basin, for example. They report a significant increase in the ratio of subsurface runoff to total runoff for the region and for 24 of the 42 study basins, with the change most prevalent across the northern foothills of the Brooks Range. They also observed a decline in terrestrial water storage, which they attribute to losses in soil ice that outweigh gains in soil liquid water storage. The timing of peak spring freshet discharge, the flow of snowmelt into the sea, also has shifted earlier by 4.5 days.

The authors say findings have implications for water, carbon and nutrient cycling in coastal ecosystems and beyond. North Slope rivers are a primary source of new organic nutrients to the Beaufort Sea lagoons, with half of the annual freshwater export occurring in a two-week window following snowmelt in spring. As the climate warms, carbon that has been sequestered for thousands of years in permafrost soils thaws and is mobilized and transferred to river systems, with some emitted to the atmosphere as carbon dioxide and methane, accelerating warming.

This study is part of a multi-institution grant from National Science Foundation’s Long-term Ecological Research program and Office of Polar Programs led by scientists at the University of Texas at Austin. In addition to Rawlins, other project scientists are investigating how processes such as shoreline erosion and sea ice dynamics are influencing coastal ecosystem function in this region.

Cancer therapy may be aided by induced macropinocytosis, a rare form of cell death

The delicate water lily: A rose by another name?

How do scars form? Fascia function as a repository of mobile scar…