Testimony: LIGO has “cracked open” a new window to the universe 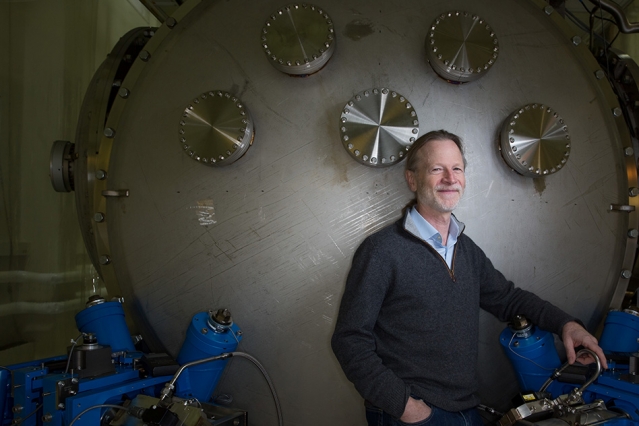 LIGO’s recent detection of gravitational waves marks the beginning of a new era for astrophysics, and further insights into black holes, neutron stars, supernovae, and other phenomena are expected before long, MIT LIGO Laboratory Director David Shoemaker told members of Congress this week.

Shoemaker, who is also a senior research scientist at the MIT Kavli Institute for Astrophysics and Space Research, was part of a panel that briefed the House Committee on Science, Space, and Technology on the LIGO effort and how it is expected to benefit science and innovation in the future.

He was joined at the Feb. 24 event by Fleming Crim, assistant director for the National Science Foundation’s Directorate of Mathematical and Physical Sciences; David Reitze, executive director of LIGO at Caltech; and Gabriela Gonzáles, a professor of physics and astronomy at Louisiana State University and spokesperson for the LIGO Scientific Collaboration. The hearing was attended by 21 Committee members, who expressed strong bipartisan interest in LIGO.

“The window to this new world of gravitational waves has just been cracked open,” Shoemaker said. “As we open it wider and more and more people look out on the landscape, we will be rewarded with discoveries that will, time and time again, give us all — scientists, leaders, and laypersons — a thrill of understanding of things much bigger than ourselves.”

Gravitational waves will allow researchers to “see” events that produce signals that cannot be seen any other way, he explained. And by combining gravitational wave data and data from traditional instruments, researchers will be able to test theories about fundamental components of the cosmos. These include supernovae, whose explosions modelers still have not managed to simulate, according to Shoemaker, and neutron stars, objects so dense that a teaspoon of their matter would weigh 10 million tons on Earth.

“There will certainly be surprises. Every time we open up a new window to the universe, we see new things, and we’re surprised every time,” he said.

The rate of new observations should accelerate as the sensitivity of LIGO’s detectors is improved — they currently operate at one-third their potential sensitivity — and as detectors in other countries, such as the Virgo interferometer in Italy, come online, Shoemaker said.

“With three detectors you can do a great deal more science; you can see where the source is in the sky and you can get an idea of what the polarization nature is. It will really add to what we can learn,” Shoemaker said. “It leverages our investment to have…these other projects that are coming along behind us but will supplement the science we can do and will complement the science we get from our own detectors. We are the leaders but with these other observatories we will have a worldwide, global cooperation that will bring us all forward in science.”

After their remarks, the panelists fielded questions from the committee members, including one about the practical applications of LIGO technology. Shoemaker and his colleagues offered multiple examples; the technology involved in LIGO’s powerful, stable lasers, for instance, can also benefit high-end communications, time-keeping, and navigation.

LIGO has also trained a new talent base on the leading edge of science and technology, the panelists said, noting the large number of students and early-career scientists who worked on the project and have since been hired by employers as diverse as genomics companies and the Department of Defense.