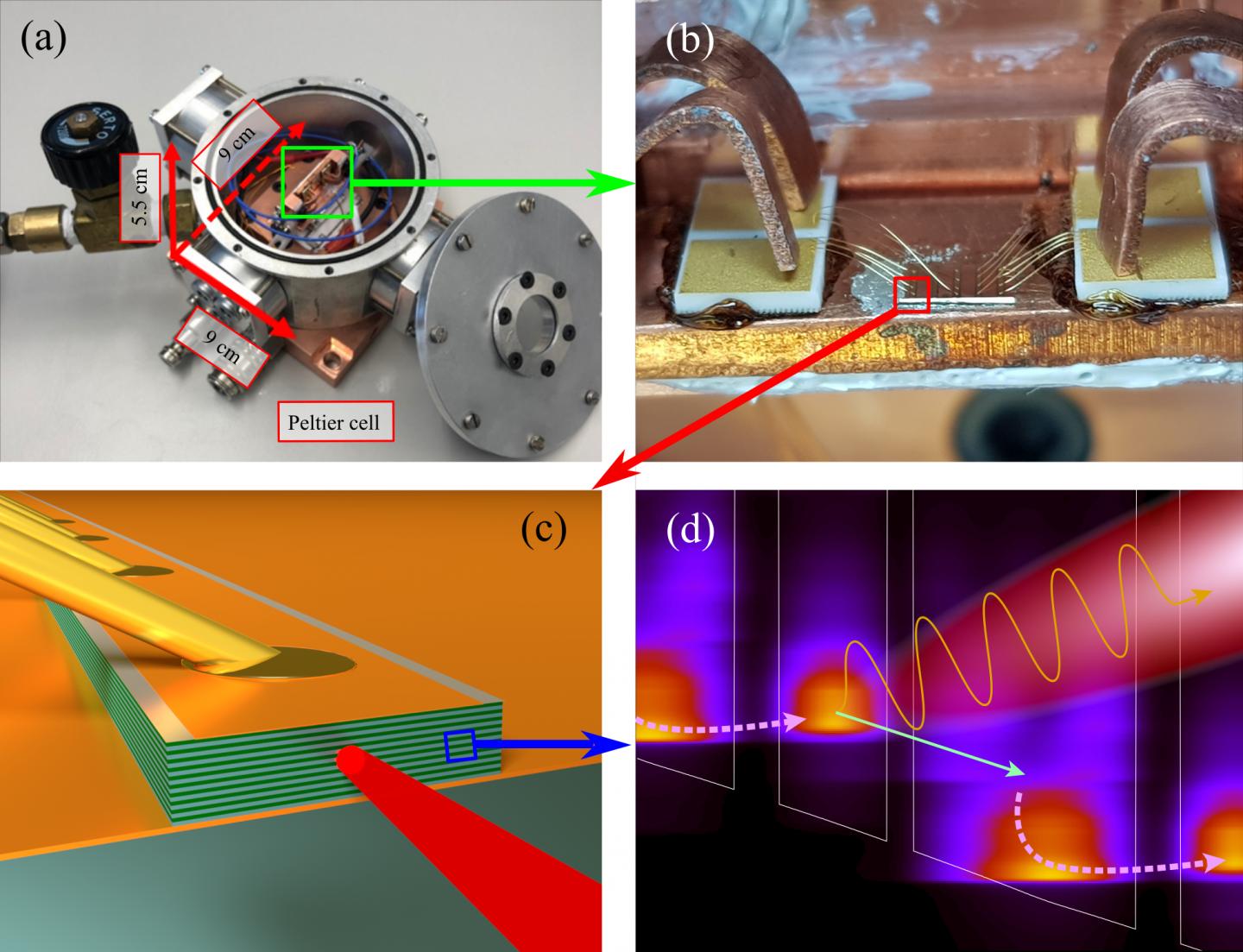 Terahertz (THz) radiation is a bit like a treasure chest that resists being opened fully. Residing in the electromagnetic spectrum between the infrared and microwave regions, THz radiation combines a range of properties that are ideal with a view to applications. It provides a window to unique spectroscopic information about molecules and solids, it can penetrate non-conducting materials such as textiles and biological tissue, and it does so without ionising — and hence damaging — the object, or subject, under study. This opens up intriguing prospects for non-invasive imaging and non-destructive quality control, among other applications. But whereas there is no shortage in ideas for potential uses, their implementation is hampered by a lack of practical technologies for generating and detecting THz radiation.

Therefore the excitement as Lorenzo Bosco, Martin Franckié and colleagues from the group of Jérôme Faist at the Institute for Quantum Electronics of ETH Zurich reported now the realization of a THz quantum cascade laser that operates at a temperature of 210 K (-63 °C). That is the highest operational temperature achieved so far for this type of device. More importantly, this is the first time that operation of such a device has been demonstrated in a temperature regime where no cryogenic coolants are needed. Instead, Bosco et al. used a thermoelectric cooler, which is much more compact, cheaper and easier to maintain than cryogenic equipment. With this advance, they removed the main obstacles on the route to various practical applications.

A cascade towards applications

Quantum cascade lasers (QCLs) have long been established as a natural concept for THz devices. Like many lasers that are widely used as sources of light in the visible-to-infrared frequency region, QCLs are based on semiconductor materials. But compared to typical semiconductor lasers used, for instance, in barcode readers or laser pointers, QCLs operate according to a fundamentally different concept to achieve light emission. In short, they are built around repeated stacks of precisely engineered semiconductor structures (see the figure, panel c), which are designed such that suitable electronic transitions take place in them (panel d).

QCLs have been proposed in 1971, but they were first demonstrated only in 1994, by Faist and colleagues, then working at Bell Laboratories (US). The approach has proved its value in a board range of experiments, both fundamental and applied, mainly in the infrared region. The development of QCLs for THz emission has made substantial advances, too, starting from 2001. Widespread use has been hindered though by the requirement for cryogenic coolants — typically liquid helium — which adds substantial complexity and cost, and makes devices large and less mobile. Progress towards operation of THz QCLs at higher temperatures got essentially stuck seven years ago, when operation of devices at around 200 K (-73 °C) was achieved.

Reaching 200 K was an impressive feat. That temperature, however, is just below the mark where cryogenic techniques could be replaced with thermoelectric cooling. That the record temperature did not move since 2012 also meant that some sort of ‘psychological barrier’ started to go up — many in the field started to accept that THz QCLs would always have to operate in conjunction with a cryogenic cooler. The ETH team has now broken down that barrier. Writing in Applied Physics Letters, they present a thermoelectrically cooled THz QCL, operating at temperatures of up to 210?K. Moreover, the laser light emitted was strong enough that it could be measured with a room-temperature detector. This means that entire setup worked without cryogenic cooling, further strengthening the potential of the approach for practical applications.

Bosco, Franckié and their co-workers managed to remove the ‘cooling barrier’ due to two related achievements. First, they used in the design of their QCL stacks the simplest unit structure possible, based on two so-called quantum wells per period (see the figure, panel d). This approach has been known to be a route to higher temperatures of operation, but at the same time this two-well design is also extremely sensitive to smallest changes in the geometry of the semiconductor structures. Optimizing performance relative to one parameter can lead to degradation relative to another. With systematic experimental optimization being not a viable option, they had to rely on numerical modelling.

This is the second area where the group has made substantial progress. In recent work, they have established that they can accurately simulate complex experimental QCL devices, using an approach known as nonequilibrium Green’s function model. The calculations have to be carried out on a powerful computer cluster, but they are sufficiently efficiently that they can be used to search systematically for optimal designs. The group’s ability to accurately predict the properties of devices — and to fabricate devices according to precise specifications — gave them the tools to realize a series of lasers that consistently work at temperatures that could be reached with thermoelectrical cooling (see the figure, panels a and b). And the approach is by no means exhausted. Ideas for pushing the operational temperature further up exist in the Faist group, and preliminary results do look promising.

The first demonstration of a terahertz quantum cascade laser operating without cryogenic cooling constitutes an important step towards filling the ‘THz gap’, which has long existed between the mature technologies for microwave and infrared radiation. With no moving parts or circulating liquids involved, the sort of thermoelectrically cooled THz QCLs now introduced by the ETH physicists can be more easily applied and maintained outside the confines of specialised laboratories — lifting further the lid of the ‘THZ treasure chest’.