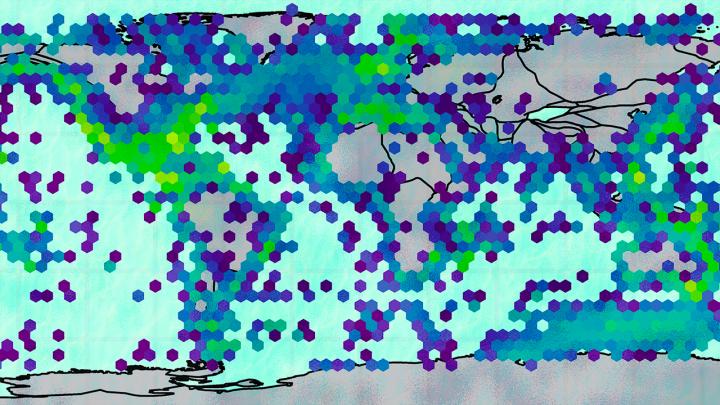 The bulging, equator-belted midsection of Earth currently teems with a greater diversity of life than anywhere else — a biodiversity that generally wanes when moving from the tropics to the mid-latitudes and the mid-latitudes to the poles.

As well-accepted as that gradient is, though, ecologists continue to grapple with the primary reasons for it. New research from the University of Nebraska-Lincoln, Yale University and Stanford University suggests that temperature can largely explain why the greatest variety of aquatic life resides in the tropics — but also why it has not always and, amid record-fast global warming, soon may not again.

Published May 6 in the journal Current Biology, the study estimates that marine biodiversity tends to increase until the average surface temperature of the ocean reaches about 65 degrees Fahrenheit, beyond which that diversity slowly declines.

During intervals of Earth’s history when the maximum surface temperature was lower than 80 degrees Fahrenheit, the greatest biodiversity was found around the equator, the study concluded. But when that maximum exceeded 80 degrees, marine biodiversity ebbed in the tropics, where those highest temperatures would have manifested, while peaking in waters at the mid-latitudes and the poles.

Marine life that could travel considerable distances likely migrated north or south from the tropics during periods of extreme heat, said co-author Will Gearty, a postdoctoral researcher of biological sciences at Nebraska. Stationary or slower-moving animals, such as sponges and sea stars, may have instead faced extinction.

“People have always theorized that the tropics are a cradle of diversity — that it pops up and then is protected there,” Gearty said. “There’s also this idea that … there’s lots of migration toward the tropics, but not away from it. All of that centers around the idea that the highest diversity will always be in the tropics. And that’s not what we see as we go back in time.”

Gearty, Yale’s Thomas Boag and Stanford’s Richard Stockey went back about 145 million years, compiling estimated temperatures and fossil records of mollusks — snails, clams, cephalopods and the like — from 24 horizontal bands of Earth that were equal in surface area. The trio chose mollusk records for multiple reasons: They live (and lived) around the globe, in large enough numbers to accommodate statistical analyses, with hard enough shells to yield identifiable fossils, with enough variation that their diversity trends might generalize to fish, corals, crustaceans and an array of other marine animals.

That data allowed the team to derive the temperature-diversity relationship across 10 geologic intervals that covered most of the elapsed time from the Cretaceous period through the modern day.

“Temperature seems to account for a lot of the trend that we see in the fossil record,” Gearty said. “There are certainly other factors, but this seems to be the first-order predictor of what’s going on.”

To investigate why temperature might be so influential and predictive, Stockey took the lead in developing a mathematical model. The model accounts for the fact that higher temperatures generally increase the amount of energy in an ecosystem, theoretically raising the ceiling on the biodiversity an ecosystem can sustain, at least to a point.

But it also factors in metabolism and the small matter of oxygen, which, by dissolving in water, makes aquatic life possible in the first place. Colder waters dissolve more oxygen, meaning that elevated temperatures naturally reduce the amount available to marine life and, by extension, potentially limit the biodiversity an ecosystem can support. Higher temperatures also raise the metabolic demands of organisms, increasing the minimum oxygen needed to sustain active marine animals.

“That means you require more oxygen in warmer waters,” Gearty said. “And if the amount of oxygen available is not satisfying that increase in metabolism, you won’t survive in that environment. So, to survive, you’ll need to move to another environment where the temperature is lower.”

The team applied its model to numerous marine species with varying metabolisms. As expected, metabolism influenced how the population of a given species would respond to a rise in temperature, along with the temperature threshold beyond which that population would decline. When the researchers averaged the effects of metabolism and oxygen availability across those species, they discovered that the resulting temperature-diversity relationship resembled — and, in doing so, supported — the one they derived from the fossil record.

“It shows a similar trend of this (biodiversity) increase and then decrease,” Gearty said. “After many a day at the whiteboard just trying to figure out how to make it work, it all just came together very nicely at the end — you know, a nice little bow on top.”

Collectively, the study indicates that human-driven global warming could hit the inhabitants of tropical waters especially hard. The average surface temperature of tropical waters could jump by as many as 6 degrees Fahrenheit by the year 2300, according to one projection. And according to the fossil records analyzed for the study, similar temperature increases during the past 145 million years have sometimes permanently driven mollusk species from tropical waters. There are worrying signs that the expected trend is already underway, Gearty said.

Though the team had difficulty narrowing down the projected magnitude of the decline in biodiversity, Gearty said the worst-case projection called for the tropics losing up to 50% of their marine species by 2300. Some of the loss will take the form of migration. Yet the warming could spell doom for, say, corals and the thousands of marine species that they support, he said, as seen in the oft-fatal bleaching of the Great Barrier Reef off the coast of Australia.

“This (biodiversity loss) is already happening, and it will only keep happening unless we do something,” Gearty said. “We can’t really take back the buildup of carbon dioxide (in the atmosphere) that’s already happened, so it’s going to keep happening for some amount of time. But it’s up to us to determine how long until it’ll stop.”