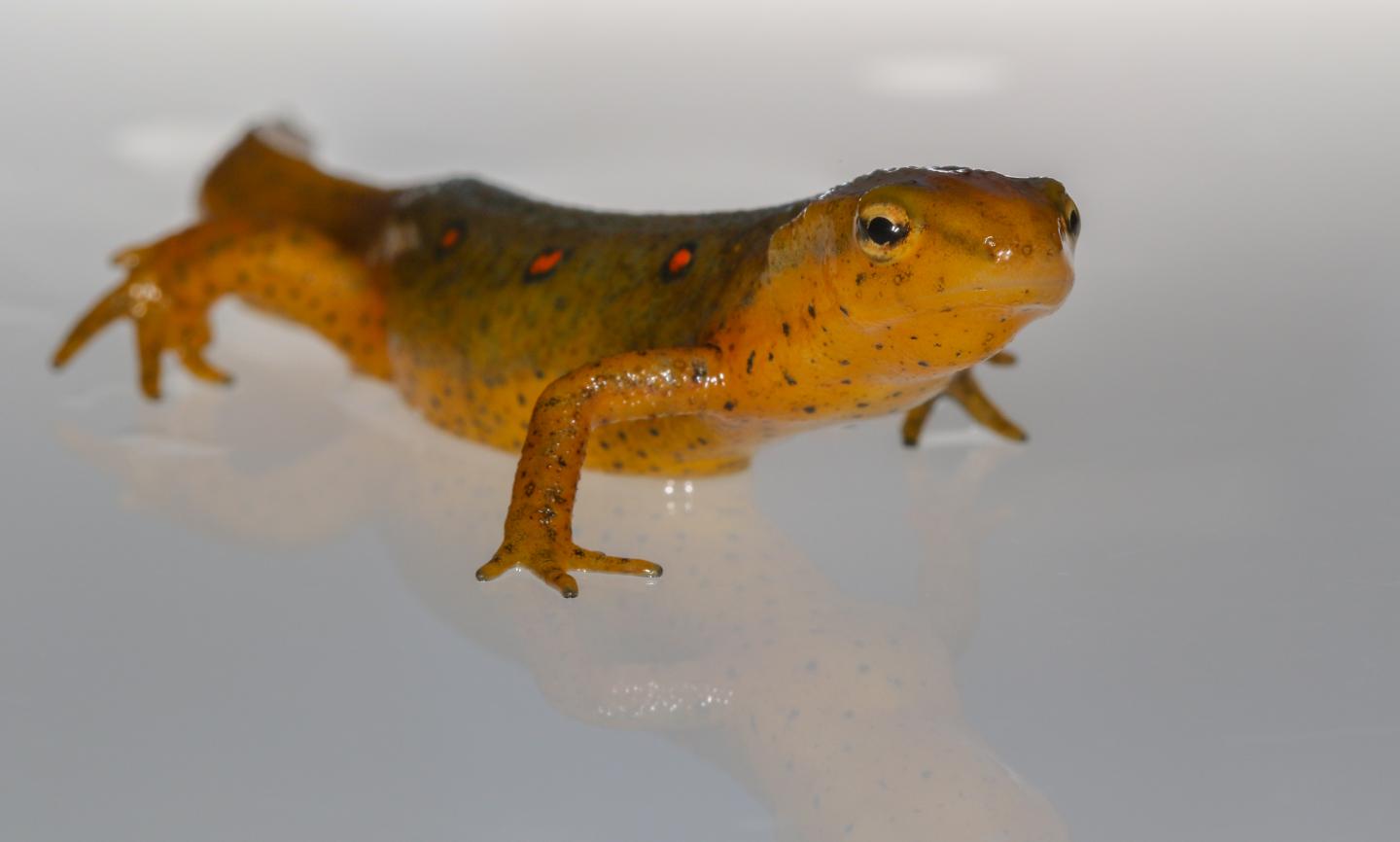 Eastern newt populations in the northeastern United States and southeastern Canada are at greatest risk of infection with a new skin-eating fungus, Batrachochytrium salamandrivorans (Bsal), according to a study published February 18 in the open-access journal PLOS Pathogens by Matthew Gray of the University of Tennessee Institute of Agriculture, and colleagues.

Bsal was discovered killing salamanders in the Netherlands in 2010, and since then, the pathogen has spread to other European countries. Bsal is believed to be from Asia and is being spread through the international trade of amphibians, but it has not yet arrived in North America. As a proactive strategy for disease control, Gray and his colleagues evaluated how a range of environmental temperatures in North America could affect the invasion risk of Bsal into a widely distributed salamander species — the eastern newt.

The results show that eastern newt populations are at greatest risk for Bsal invasion in the northeastern United States, higher elevations of the Appalachian Mountains, and southeastern Canada – more northerly regions compared to previous assessments. Changes in eastern newt susceptibility to Bsal infection associated with temperature are likely an interaction between pathogen replication rate and host immune defenses, including changes in skin microbiome composition and the host’s ability to produce Bsal-killing proteins on the skin. The study provides new insights into how latitude, elevation and season can impact the epidemiology of Bsal. According to the authors, the results suggest that climate change will likely impact Bsal invasion probability, and strategies that manipulate the microclimate of newt habitats could be useful in managing Bsal outbreaks.

The authors conclude, “Our findings will help natural resource organizations entrusted with the management of wildlife diseases target high risk areas for Bsal surveillance in North America, and effectively respond to an outbreak if one occurs.”

In your coverage please use this URL to provide access to the freely available article in PLOS Pathogens: http://journals.plos.org/plospathogens/article?id=10.1371/journal. ppat.1009234

Funding: MJG, DLM, DCW, and LAR-S received funds from the National Science Foundation Division of Environmental Biology (Ecology and Evolution of Infectious Diseases Program, https://www.nsf.gov/funding/pgm_summ.jsp?pims_id=5269) Grant #1814520. DCW and LAR-S were partially supported by the U.S. Department of Defense Strategic Environmental Research and Development Program (https://www.serdp-estcp.org/) Grant #W912HQ-16-C-0033). MJG and DLM were supported by U.S. Department of Agriculture National Institute of Food and Agriculture (https://nifa.usda.gov/program/hatch-act-1887-multistate-research-fund), Hatch Project #1012932. The funders had no role in study design, data collection and analysis, decision to publish, or preparation of the manuscript.