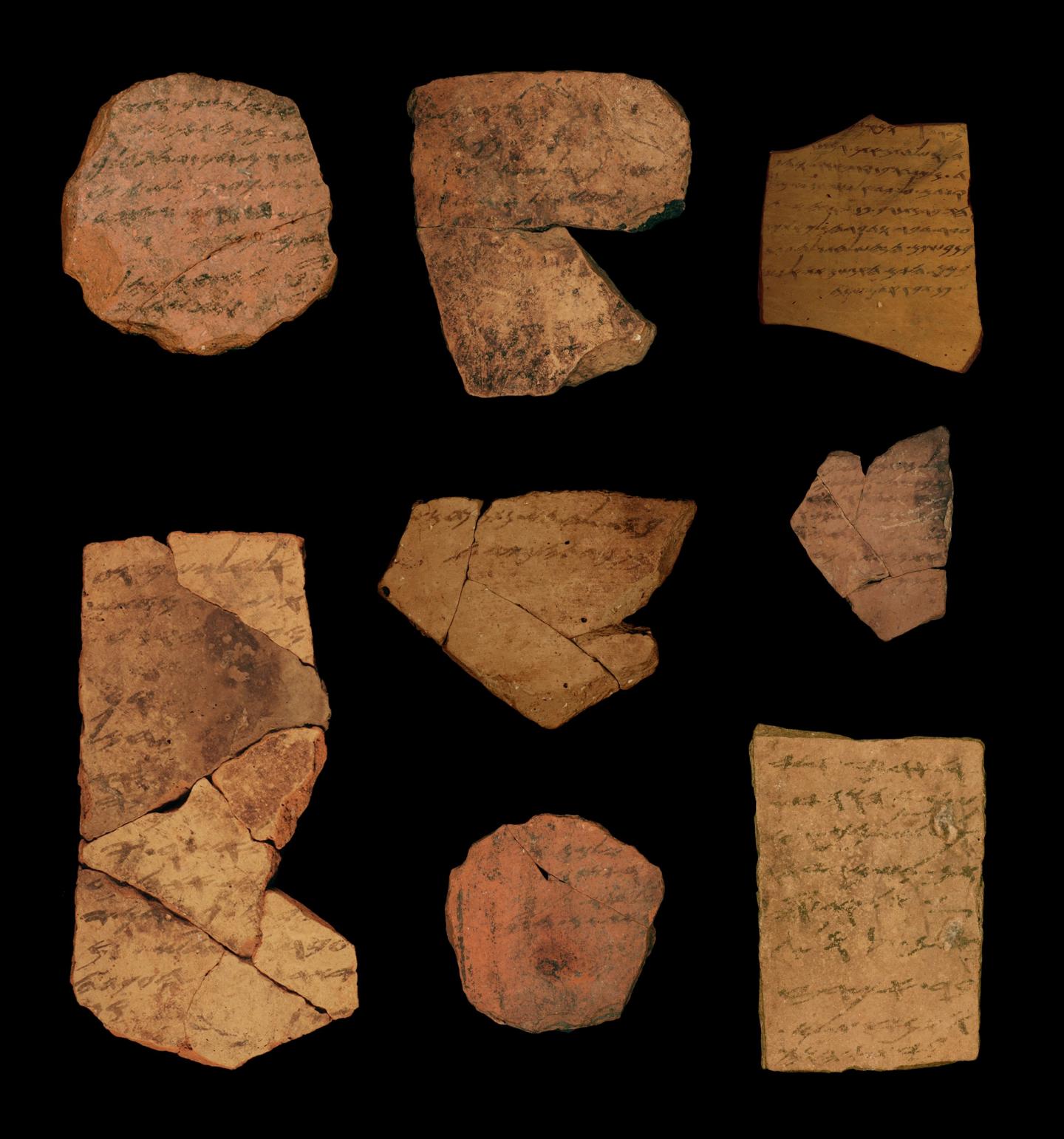 Researchers at Tel Aviv University (TAU) have analyzed 18 ancient texts dating back to around 600 BCE from the Tel Arad military post using state-of-the-art image processing, machine learning technologies, and the expertise of a senior handwriting examiner. They have concluded that the texts were written by no fewer than 12 authors, suggesting that many of the inhabitants of the kingdom of Judah during that period were able to read and write, with literacy not reserved as an exclusive domain in the hands of a few royal scribes.

The special interdisciplinary study was conducted by TAU’s Dr. Arie Shaus, Ms. Shira Faigenbaum-Golovin, and Dr. Barak Sober of the Department of Applied Mathematics; Prof. Eli Piasetzky of the Raymond and Beverly Sackler School of Physics and Astronomy; and Prof. Israel Finkelstein of the Jacob M. Alkow Department of Archeology and Ancient Near Eastern Civilizations. The forensic handwriting specialist, Ms. Yana Gerber, is a senior expert who served for 27 years in the Questioned Documents Laboratory of the Israel Police Division of Identification and Forensic Science and its International Crime Investigations Unit.

The results were published in PLOS ONE on September 9, 2020.

“There is a lively debate among experts as to whether the books of Deuteronomy, Joshua, Judges, Samuel, and Kings were compiled in the last days of the kingdom of Judah or after the destruction of the First Temple by the Babylonians,” Dr. Shaus explains. “One way to try to get to the bottom of this question is to ask when there was the potential for the writing of such complex historical works.

“For the period following the destruction of the First Temple in 586 BC, there is very scant archaeological evidence of Hebrew writing in Jerusalem and its surroundings, but an abundance of written documents has been found for the period preceding the destruction of the Temple. But who wrote these documents? Was this a society with widespread literacy, or was there just a handful of literate people?”

To answer this question, the researchers examined the ostraca (fragments of pottery vessels containing ink inscriptions) writings discovered at the Tel Arad site in the 1960s. Tel Arad was a small military post on the southern border of the kingdom of Judah; its built-up area was about 20,000 square feet and it housed between 20 and 30 soldiers.

“We examined the question of literacy empirically, from different directions of image processing and machine learning,” says Ms. Faigenbaum-Golovin. “Among other things, these areas help us today with the identification, recognition, and analysis of handwriting, signatures, and so on. The big challenge was to adapt modern technologies to 2,600-year-old ostraca. With a lot of effort, we were able to produce two algorithms that could compare letters and answer the question of whether two given ostraca were written by two different people.”

In 2016, the researchers theorized that 18 of the Tel Arad inscriptions were written by at least four different authors. Combined with additional textual evidence, the researchers concluded that there were in fact at least six different writers. The study aroused great interest around the world.

The TAU researchers then decided to compare the algorithmic methods, which have since been refined, to the forensic approach. To this end, Ms. Gerber joined the team. After an in-depth examination of the ancient inscriptions, she found that the 18 texts were written by at least 12 distinct writers with varying degrees of certainty. She examined the original Tel Arad ostraca at the Israel Museum, the Eretz Israel Museum, the Sonia and Marco Nedler Institute of Archaeology of Tel Aviv University, and the Israel Antiquities Authority’s warehouses at Beit Shemesh.

“This study was very exciting, perhaps the most exciting in my professional career. These are ancient Hebrew inscriptions written in ink on shards of pottery, utilizing an alphabet that was previously unfamiliar to me. I studied the characteristics of the writing in order to analyze and compare the inscriptions, while benefiting from the skills and knowledge I acquired during my bachelor’s degree studies in classical archaeology and ancient Greek at Tel Aviv University. I delved into the microscopic details of these inscriptions written by people from the First Temple period, from routine issues such as orders concerning the movement of soldiers and the supply of wine, oil, and flour, through correspondence with neighboring fortresses, to orders that reached the Tel Arad fortress from the high ranks of the Judahite military system. I had the feeling that time had stood still and there was no gap of 2,600 years between the writers of the ostraca and ourselves.

“Handwriting is made up of unconscious habit patterns. The handwriting identification is based on the principle that these writing patterns are unique to each person and no two people write exactly alike. It is also assumed that repetitions of the same text or characters by the same writer are not exactly identical and one can define a range of natural handwriting variations specific to each one. Thus, forensic handwriting analysis aims at tracking features corresponding to specific individuals, and concluding whether a single or rather different authors wrote the given documents.

“The examination process is divided into three steps: analysis, comparison, and evaluation. The analysis includes a detailed examination of every single inscription, according to various features, such as the spacing between letters, their proportions, slant, etc. The comparison is based upon the aforementioned features across various handwritings. In addition, consistent patterns,such the same combinations of letters, words, and punctuation, are identified. Finally, an evaluation of identicalness or distinctiveness of the writers is made. It should be noted that, according to an Israel Supreme Court ruling, a person can be convicted of a crime based on the opinion of a forensic handwriting expert.”

“We were in for a big surprise: Yana identified more authors than our algorithms did. It must be understood that our current algorithms are of a “cautious” nature — they know how to identify cases in which the texts were written by people with significantly different writing; in other cases they refrain from definite conclusions. In contrast, an expert in handwriting analysis knows not only how to spot the differences between writers more accurately, but in some cases may also arrive at the conclusion that several texts were actually written by a single person. Naturally, in terms of consequences, it is very interesting to see who the authors are. Thanks to the findings, we were able to construct an entire flowchart of the correspondence concerning the military fortress — who wrote to whom and regarding what matter. This reflects the chain of command within the Judahite army.

“For example, in the area of Arad, close to the border between the kingdoms of Judah and Edom, there was a military force whose soldiers are referred to as “Kittiyim” in the inscriptions, most likely Greek mercenaries. Someone, probably their Judahite commander or liaison officer, requested provisions for the Kittiyim unit. He writes to the quartermaster of the fortress in Arad “give the Kittiyim flour, bread, wine” and so on. Now, thanks to the identification of the handwriting, we can say with high probability that there was not only one Judahite commander writing, but at least four different commanders. It is conceivable that each time another officer was sent to join the patrol, they took turns.”

According to the researchers, the findings shed new light on Judahite society on the eve of the destruction of the First Temple — and on the setting of the compilation of biblical texts. Dr. Sober explains:

“It should be remembered that this was a small outpost, one of a series of outposts on the southern border of the kingdom of Judah. Since we found at least 12 different authors out of 18 texts in total, we can conclude that there was a high level of literacy throughout the entire kingdom. The commanding ranks and liaison officers at the outpost, and even the quartermaster Eliashib and his deputy, Nahum, were literate. Someone had to teach them how to read and write, so we must assume the existence of an appropriate educational system in Judah at the end of the First Temple period. This, of course, does not mean that there was almost universal literacy as there is today, but it seems that significant portions of the residents of the kingdom of Judah were literate. This is important to the discussion on the composition of biblical texts. If there were only two or three people in the whole kingdom who could read and write, then it is unlikely that complex texts would have been composed.”

“Whoever wrote the biblical works did not do so for us, so that we could read them after 2,600 years. They did so in order to promote the ideological messages of the time. There are different opinions regarding the date of the composition of biblical texts. Some scholars suggest that many of the historical texts in the Bible, from Joshua to II Kings, were written at the end of the 7th century BC, very close to the period of the Arad ostraca. It is important to ask who these texts were written for. According to one view, there were events in which the few people who could read and write stood before the illiterate public and read texts out to them. A high literacy rate in Judah puts things into a different light.

“Until now, the discussion of literacy in the kingdom of Judah has been based on circular arguments, on what is written within the Bible itself, for example on scribes in the kingdom. We have shifted the discussion to an empirical perspective. If in a remote place like Tel Arad there was, over a short period of time, a minimum of 12 authors of 18 inscriptions, out of the population of Judah which is estimated to have been no more than 120,000 people, it means that literacy was not the exclusive domain of a handful of royal scribes in Jerusalem. The quartermaster from the Tel Arad outpost also had the ability to read and appreciate them.”