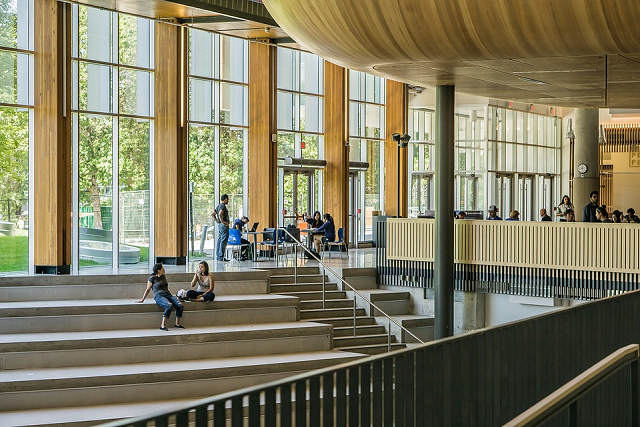 SEATTLE — While studying the rapid growth of the therapeutic boarding school industry, Jessica A. Pfaffendorf observed that troubled young men in at least one program most often displayed a type of “hybrid masculinity.”

This observation — young men incorporating more feminine behaviors in their social interactions while at boarding school — presented a notable incongruence.

Earlier research has found that males in traditional boarding and preparatory school settings are prone to display masculine behaviors to signal their wealth, self-worth, and strength. In those settings, such behaviors have been positively linked to future attainment and success, said Pfaffendorf, a doctoral candidate in the University of Arizona School of Sociology.

Pfaffendorf’s findings are part of a larger investigation she began conducting in 2012 on the rise of therapeutic boarding schools. About 300 of these elite residential treatment centers exist in the United States, a number representing a threefold increase in the last two decades, Pfaffendorf said.

Such programs generally cater to those aged 13 to 18 who have behavioral and psychological issues, and who are dealing with addictions. Tuition for these programs can range between $75,000 and $100,000 annually, and they exist most often to help young adults graduate from high school, while offering interventions. Most often, upper-class, white young men enroll, Pfaffendorf said.

As part of her research, Pfaffendorf spent two years observing and conducting interviews at a therapeutic boarding school located in the Southwest region of the U.S.

The program in the Southwest operated on an active ranch, involving the young men in the grooming, riding, and training of horses, as well as wilderness excursions with counselors. The program, like most others nationally, also reinforced values associated with relationship building, interdependence, recognition of one’s powerlessness, communality, and the open expression of emotions.

Pfaffendorf found that the young men often “spoke at length about their feelings, expressed emotion openly, and freely admitted their past wrongs and the guilt that came along with them.” These men also described themselves as being more mature and having more purpose than their counterparts attending traditional schools.

“By communicating and responding maturely to situations, students maintain that they are better leaders and better able to succeed than other young men,” Pfaffendorf said. “In these ways, students use hybrid masculinities to reassert dominance,” particularly over those attending traditional schools.

It is important to note here that sociologists understand gender not as a biological occurrence, but as culturally-defined behaviors that are learned and performed.

Also important, Pfaffendorf found that the men did not fully embrace feminine demeanors. Instead, they aligned masculine and feminine styles with intention — namely to assert that they were in control of their emotions and were, therefore, more mature than their peers.

Given the national discourse about male masculinity, often evoked during conversations about acts of violence carried out by boys and men, Pfaffendorf believes her findings may offer insight about how and why some young men adopt styles that are not usually perceived as “manly.”

“In sum, students in therapeutic boarding schools may appropriate feminine qualities, but these qualities are used to reassert masculine dominance — sustaining prevailing gender norms,” Pfaffendorf said. “This contributes to what others have called the ‘flexibility of patriarchy’ — that privileged men are able to mobilize feminine characteristics to their advantage and to assert dominance.”

Pfaffendorf suggests that future research should evaluate the long-term implications of therapeutic boarding schools, and whether young men maintain their hybrid masculinity or return to more dominant forms of masculinity.

The paper, “Sensitive Cowboys: Mobilizing Hybrid Masculinities in a Therapeutic Boarding School,” will be presented on Saturday, Aug. 20, at 2:30 p.m. PDT in Seattle at the American Sociological Association’s 111th Annual Meeting.

To obtain a copy of the paper; for assistance reaching the study’s author(s); or for more information on other ASA presentations, members of the media can contact Daniel Fowler, ASA Media Relations Manager, at (202) 527-7885 or [email protected] During the Annual Meeting (Aug. 20-23), ASA Public Information Office staff can be reached in the on-site press office, located in Room 601 of the Washington State Convention Center, at (206) 219-4513 or (914) 450-4557 (cell).

La Monica Everett-Haynes, Senior Communications Manager, University of Arizona, wrote this press release. For more information about the study, members of the media can also contact Everett-Haynes at (520) 626-4405 or [email protected]