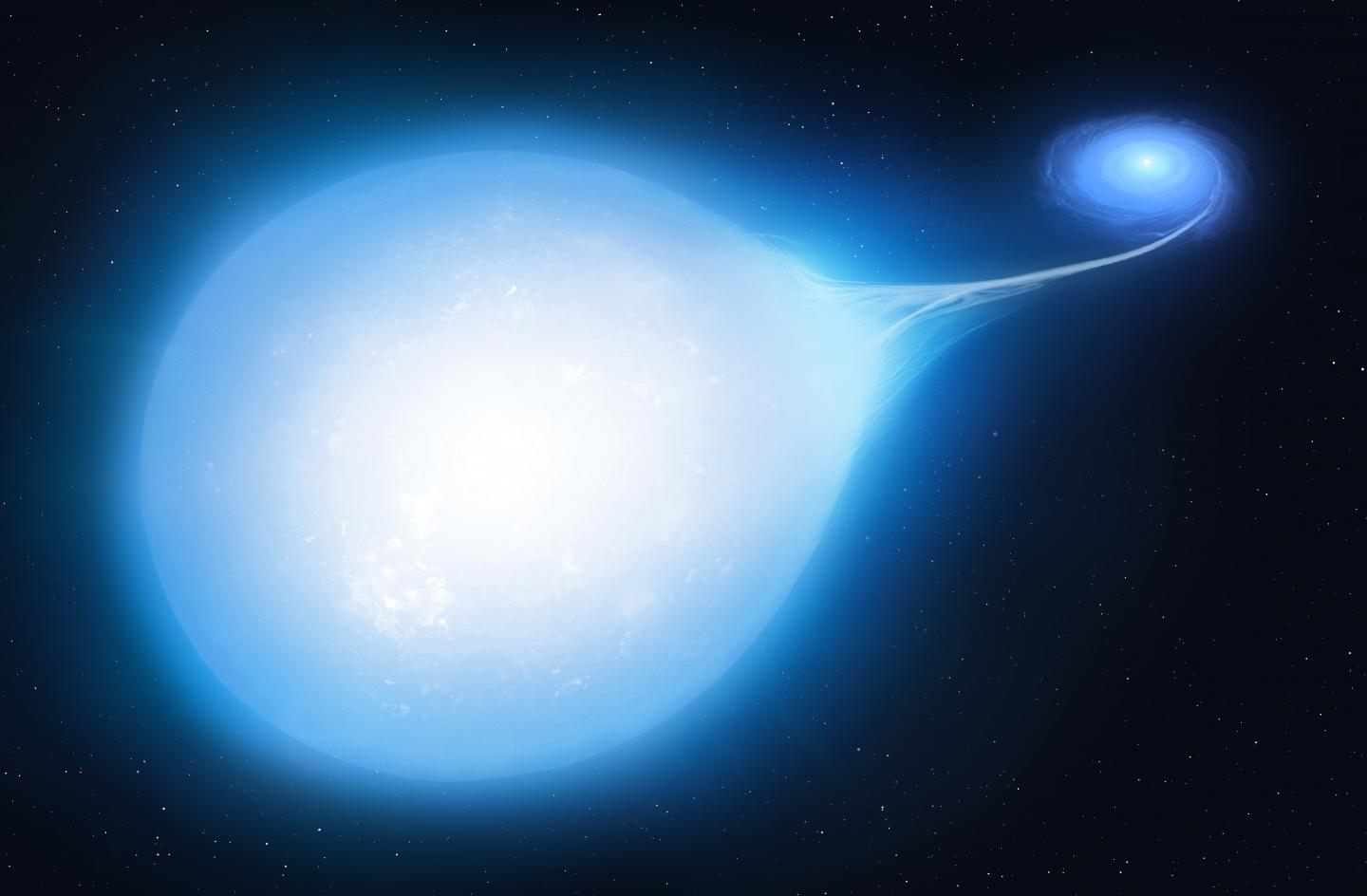 Astronomers have made the rare sighting of two stars spiralling to their doom by spotting the tell-tale signs of a teardrop-shaped star.

The tragic shape is caused by a massive nearby white dwarf distorting the star with its intense gravity, which will also be the catalyst for an eventual supernova that will consume both. Found by an international team of astronomers and astrophysicists led by the University of Warwick, it is one of only very small number of star systems that has been discovered that will one day see a white dwarf star reignite its core.

New research published by the team today (12 July) in Nature Astronomy confirms that the two stars are in the early stages of a spiral that will likely end in a Type Ia supernova, a type that helps astronomers determine how fast the universe is expanding.

This research received funding from the Deutsche Forschungsgemeinschaft (DFG, German Research Foundation) and the Science and Technology Facilities Council, part of UK Research and Innovation.

HD265435 is located roughly 1,500 light years away and comprises a hot subdwarf star and a white dwarf star orbiting each other closely at a rate of around 100 minutes. White dwarfs are ‘dead’ stars that have burnt out all their fuel and collapsed in on themselves, making them small but extremely dense.

A type Ia supernova is generally thought to occur when a white dwarf star’s core reignites, leading to a thermonuclear explosion. There are two scenarios where this can happen. In the first, the white dwarf gains enough mass to reach 1.4 times the mass of our Sun, known as the Chandrasekhar limit. HD265435 fits in the second scenario, in which the total mass of a close stellar system of multiple stars is near or above this limit. Only a handful of other star systems have been discovered that will reach this threshold and result in a Type Ia supernova.

Lead author Dr Ingrid Pelisoli from the University of Warwick Department of Physics, and formerly affiliated with the University of Potsdam, explains: “We don’t know exactly how these supernovae explode, but we know it has to happen because we see it happening elsewhere in the universe.

Using data from NASA’s Transiting Exoplanet Survey Satellite (TESS), the team were able to observe the hot subdwarf, but not the white dwarf as the hot subdwarf is much brighter. However, that brightness varies over time which suggested the star was being distorted into a teardrop shape by a nearby massive object. Using radial velocity and rotational velocity measurements from the Palomar Observatory and the W. M. Keck Observatory, and by modelling the massive object’s effect on the hot subdwarf, the astronomers could confirm that the hidden white dwarf is as heavy as our Sun, but just slightly smaller than the Earth’s radius.

Combined with the mass of the hot subdwarf, which is a little over 0.6 times the mass of our Sun, both stars have the mass needed to cause a Type Ia supernova. As the two stars are already close enough to begin spiralling closer together, the white dwarf will inevitably go supernova in around 70 million years. Theoretical models produced specifically for this study predict that the hot subdwarf will contract to become a white dwarf star as well before merging with its companion.

Type Ia supernovae are important for cosmology as ‘standard candles’. Their brightness is constant and of a specific type of light, which means astronomers can compare what luminosity they should be with what we observe on Earth, and from that work out how distant they are with a good degree of accuracy. By observing supernovae in distant galaxies, astronomers combine what they know of how fast this galaxy is moving with our distance from the supernova and calculate the expansion of the universe.

Dr Pelisoli adds: “The more we understand how supernovae work, the better we can calibrate our standard candles. This is very important at the moment because there’s a discrepancy between what we get from this kind of standard candle, and what we get through other methods.

“The more we understand about how supernovae form, the better we can understand whether this discrepancy we are seeing is because of new physics that we’re unaware of and not taking into account, or simply because we’re underestimating the uncertainties in those distances.

“There is another discrepancy between the estimated and observed galactic supernovae rate, and the number of progenitors we see. We can estimate how many supernovae are going to be in our galaxy through observing many galaxies, or through what we know from stellar evolution, and this number is consistent. But if we look for objects that can become supernovae, we don’t have enough. This discovery was very useful to put an estimate of what a hot subdwarf and white dwarf binaries can contribute. It still doesn’t seem to be a lot, none of the channels we observed seems to be enough.”

Artist’s impression of the HD265435 system available to download at the link below. Images are free for use if used in direct connection with this story but image copyright and credit must be University of Warwick/Mark Garlick:

Caption: Artist’s impression of the HD265435 system at around 30 million years from now, with the smaller white dwarf distorting the hot subdwarf into a distinct ‘teardrop’ shape. Credit: University of Warwick/Mark Garlick

STFC funds and supports research in particle and nuclear physics, astronomy, gravitational research and astrophysics, and space science and also operates a network of five national laboratories, including the Rutherford Appleton Laboratory and the Daresbury Laboratory, as well as supporting UK research at a number of international research facilities including CERN, FERMILAB, the ESO telescopes in Chile and many more. Visit https://stfc.ukri.org/ for more information. @STFC_Matters