The findings pave the way for understanding the mechanisms by which vitamin A operates in the brain to translate day length encoding into seasonal physiological and behavioral responses in animals. 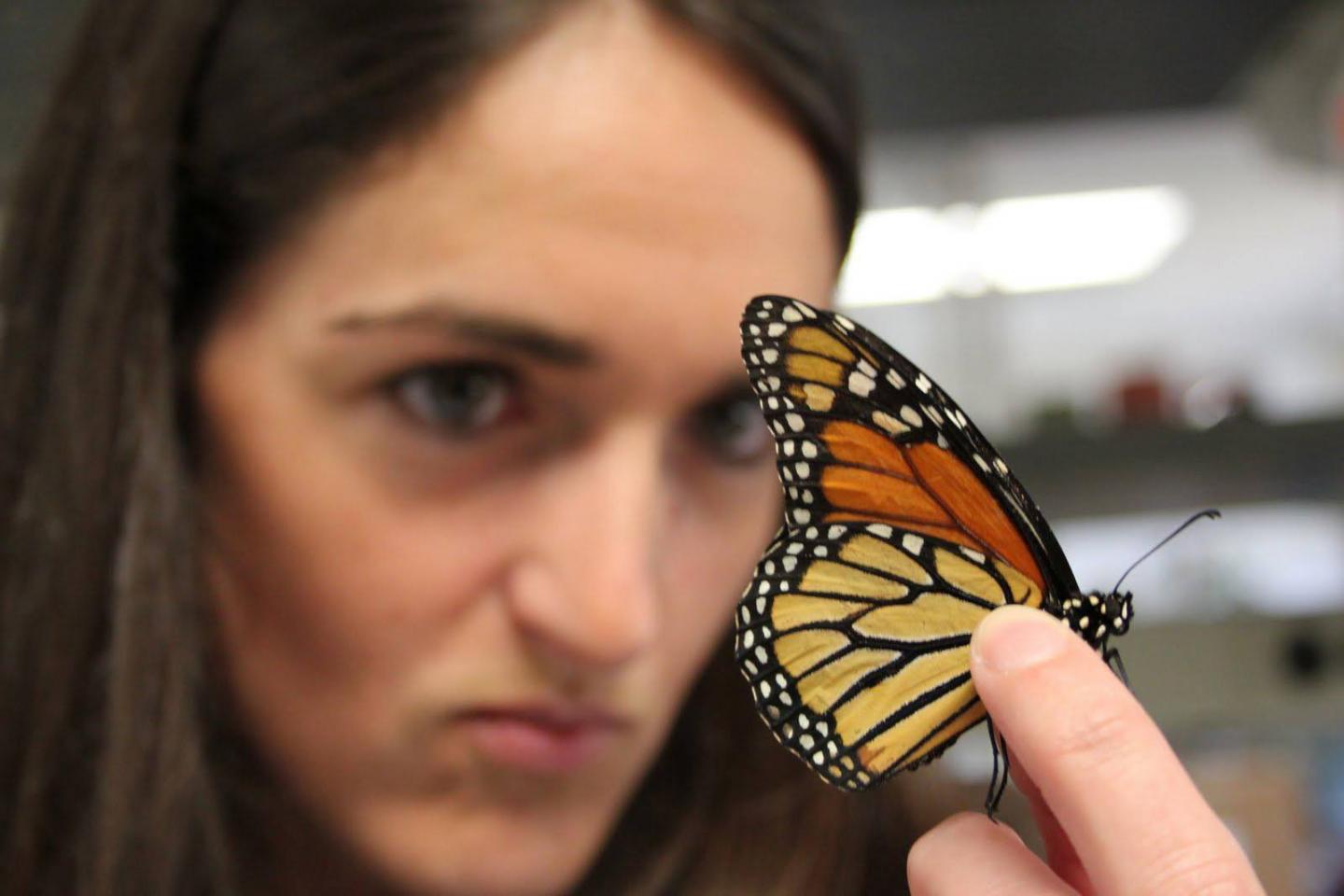 The Merlin Laboratory in the Texas A&M Department of Biology has found genetic evidence linking circadian clock genes and clock-regulated molecular pathways to the Monarch butterfly’s uncanny ability to sense the changes in day length, or photoperiod — an environmental cue that signals them to migrate and triggers the reproductive dormancy they exhibit in the process. Their work establishes a clear connection between clock genes and the vitamin A pathway within the brain of this iconic insect.

The Merlin Lab’s study, published November 25 in the Proceedings of the National Academy of Sciences, not only provides genetic proof for the photoperiod-clock connection but also demonstrates for the first time that it also regulates a critical vitamin A pathway necessary for seasonal responses.

“Nearly all organisms adapt to the seasons by adjusting their physiology and behavior to changes in day length, or photoperiod,” says Texas A&M biologist and 2017 Klingenstein-Simons Fellow Christine Merlin.

“Despite decades of research, the molecular and genetic mechanisms by which changes in photoperiod are sensed and translated into seasonal changes in animal physiology and behavior have remained poorly understood. While much remains to be learned, our findings pave the way for understanding the mechanisms by which vitamin A operates in the brain to translate day length encoding into seasonal physiological and behavioral responses in animals.

“Given that seasonal changes associated with this pathway have also been reported in the mammalian brain, it is tantalizing to speculate that the function of vitamin A in animal photoperiodism may be evolutionary conserved. If this turns out to be the case, our work in the Monarch could have implications for better understanding seasonal changes in the human brain that could lead to ailments such as seasonal depression.”

For the past six years, Merlin’s lab within the Texas A&M Center for Biological Clocks Research has been using the majestic Monarch as a model to study animal migration, the role of circadian clocks in regulating daily and seasonal animal physiology and behavior, and the evolution of the animal clockwork. Aided by CRISPR/Cas9 technology, her group already has succeeded in altering key biological clock-related genes in the Monarch in order to study their impact on daily circadian rhythms and seasonal migratory responses.

“Despite significant advances our lab has made in developing genetic tools to knock out virtually any genes in the Monarch genome, which has been key in this study to demonstrate the central importance of the vitamin A pathway in photoperiodic responses, the genetic toolbox in the Monarch is still far from rivaling with the one available in more conventional genetically tractable model organisms, such as Drosophila and the mouse,” Merlin said.

One of the complications the Merlin lab had to overcome in the study is that vitamin A is necessary for visual function of the Monarch’s compound eyes, meaning that their ninaB1 full-body knockouts would be rendered blind. As a fail-safe, Merlin’s team had to find a non-genetic way to eliminate the potential function of the compound eyes as a possible tie-back to the lack of photoperiodic responses observed in these new mutant butterflies.

“We had to be creative, so we turned to arts and crafts experiments,” Merlin said. “By painting the compound eyes of wild-type adult butterflies with black paint, we demonstrated that visual function was not necessary for photoperiodic responses, thereby supporting the idea that the vitamin A function in the brain and not the eyes is responsible for photoperiodic sensing and responses.”

Merlin says the study raises interesting questions regarding the pathway’s possible involvement in any number of intriguing scenarios, including the production of a deep-brain photoreceptor for photoperiodic sensing, the seasonal regulation of a retinoic acid-mediated transcriptional program, and/or the seasonal plasticity of the clock neuronal circuitry in the brain.

“Teasing these possibilities apart through the continued molecular and genetic dissection of this pathway in the Monarch will be necessary to increase our understanding of the mechanisms of action of vitamin A in photoperiodic responsiveness in the Monarch and animals in general,” Merlin added.

Merlin credits 2015 Texas A&M biology graduate Samantha Iiams, currently a Ph.D. candidate in the Interdisciplinary Graduate Program in Genetics, for much of her lab’s progress in this line of investigations. In addition to serving as first author for the team’s PNAS paper, Iiams has received an impressive number of awards for her work forming the basis of this study — most notably, the International Society for Research on Biological Rhythms’ 2018 Patricia DeCoursey Excellence Award as well as several first-place poster prizes.

Disrupting immune cell behavior may contribute to heart disease and…