Targeting cancer from many angles 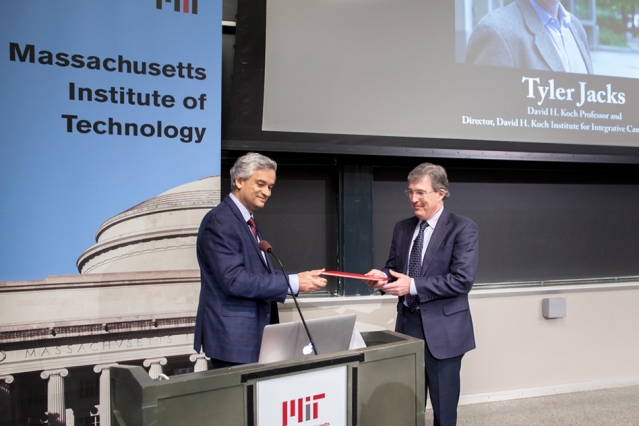 Since the discovery of the first cancer-causing genes in the 1960s, scientists have uncovered at least 600 genes that contribute to tumor development. Tyler Jacks, the David H. Koch Professor of Biology and director of MIT’s Koch Institute for Integrative Cancer Research, has spent much of his career trying to unravel the roles of some of these genes, in hopes of designing better cancer treatments.

“The challenge is to figure out the contribution of all of those different genes. If you can figure out what’s driving a cancer, you can potentially develop a drug that will help to inhibit it,” Jacks said during yesterday’s James R. Killian Jr. Faculty Achievement Award Lecture.

Jacks received this year’s Killian Award not only for his work in cancer genetics but also for his leadership of MIT’s cancer research community.

“Professor Jacks is described by colleagues as a bold and visionary leader,” reads the award citation. “His nominators say that it takes a village of passionate and dedicated people to invent solutions for the many cancers that affect our society, and this is exactly what he has created in Building 76.”

Chosen to direct MIT’s Center for Cancer Research in 2001, Jacks oversaw the evolution of that center into the Koch Institute in 2007, with the vision of bringing together MIT’s scientists and engineers to pursue innovative approaches to diagnosing, treating, and preventing the disease.

Under Jacks’ leadership, the Koch Institute has also launched new collaborations with local hospitals to help translate new cancer biology knowledge into patient treatments, and 42 companies have been created by Koch Institute faculty members or with intellectual property developed at the institute.

“We want to deliver technologies that can benefit patients,” said Jacks, who pointed out that cancer kills more people each year than HIV, malaria, and tuberculosis combined.

Jacks’ roots at MIT run deep. His father was a professor at the MIT Sloan School of Management from 1959 to 1980, and he often accompanied his father to campus.

“Kendall Square in the 1960s was a very different place,” Jacks recalled. “There was literally one place to eat, the F&T Diner. I still remember the taste of the pastrami sandwiches.”

As an undergraduate at Harvard University, Jacks heard a lecture from Robert Weinberg, an MIT biology professor who had discovered the first oncogene (a gene that drives cancer progression), known as H-ras, and the first tumor suppressor gene, known as Rb. Jacks decided that he wanted to study cancer, and after earning his PhD at the University of California at San Francisco he joined Weinberg’s lab as a postdoc at MIT’s Whitehead Institute for Biomedical Research.

There, he began work that he would continue in his own lab at MIT — genetically engineering mice to develop tumors, which allowed researchers to track the progression of the disease and to test new ways to detect and treat it. The strains of mice his lab has developed are now used in labs around the world to study cancer.

Much of Jacks’ research has focused on lung cancer, which in 2012 accounted for 160,000 deaths in the United States. He developed a mouse model for the most common form of lung cancer, adenocarcinoma, by manipulating the oncogene Kras, which is present in 30 percent of such tumors, and the tumor suppressor gene p53, which is missing in 50 percent of adenocarcinomas.

Tracking the progression of this type of cancer has led to the discovery of other genes involved in the process, which Jacks hopes may lead to new targeted drugs, just as the discovery of the HER2 breast cancer oncogene led to the drug Herceptin, which is very effective for the patients who have an overactive form of HER2.

Several years ago, as cancer genome sequencing studies turned up more and more genes involved in tumor progression, Jacks says he and his students began to feel a bit overwhelmed at the sheer number of genes they were facing: The typical lung tumor has about 175 mutated genes, and using traditional genetic engineering techniques, it takes two to three years to develop a strain of mice that express a particular cancerous mutation.

“How could we look at all of those genes and their potential contributions to cancer?” Jacks said. “We didn’t know quite what to do.”

Just in time, scientists reported the development of a new genome-editing technique known as CRISPR. This system, originally discovered in bacteria, allows researchers to create gene-editing complexes that can precisely target genes and delete or replace them.

Jacks and colleagues immediately began using the new technology and showed that it could be used to create cancerous mutations in mice much faster than previously possible. In just seven months, they created hundreds of different tumors bearing multiple distinct mutations — a feat that previously would have taken years and cost hundreds of thousands of dollars.

That project illustrates one of the key philosophies that Jacks has tried to instill at the Koch Institute — to embrace alternative approaches to solving problems. Asked after his talk what advice he would give students and postdocs just beginning their scientific careers, Jacks reinforced that message.

“If you just focus on what you know, you’re blinding yourself to new opportunities,” he said.