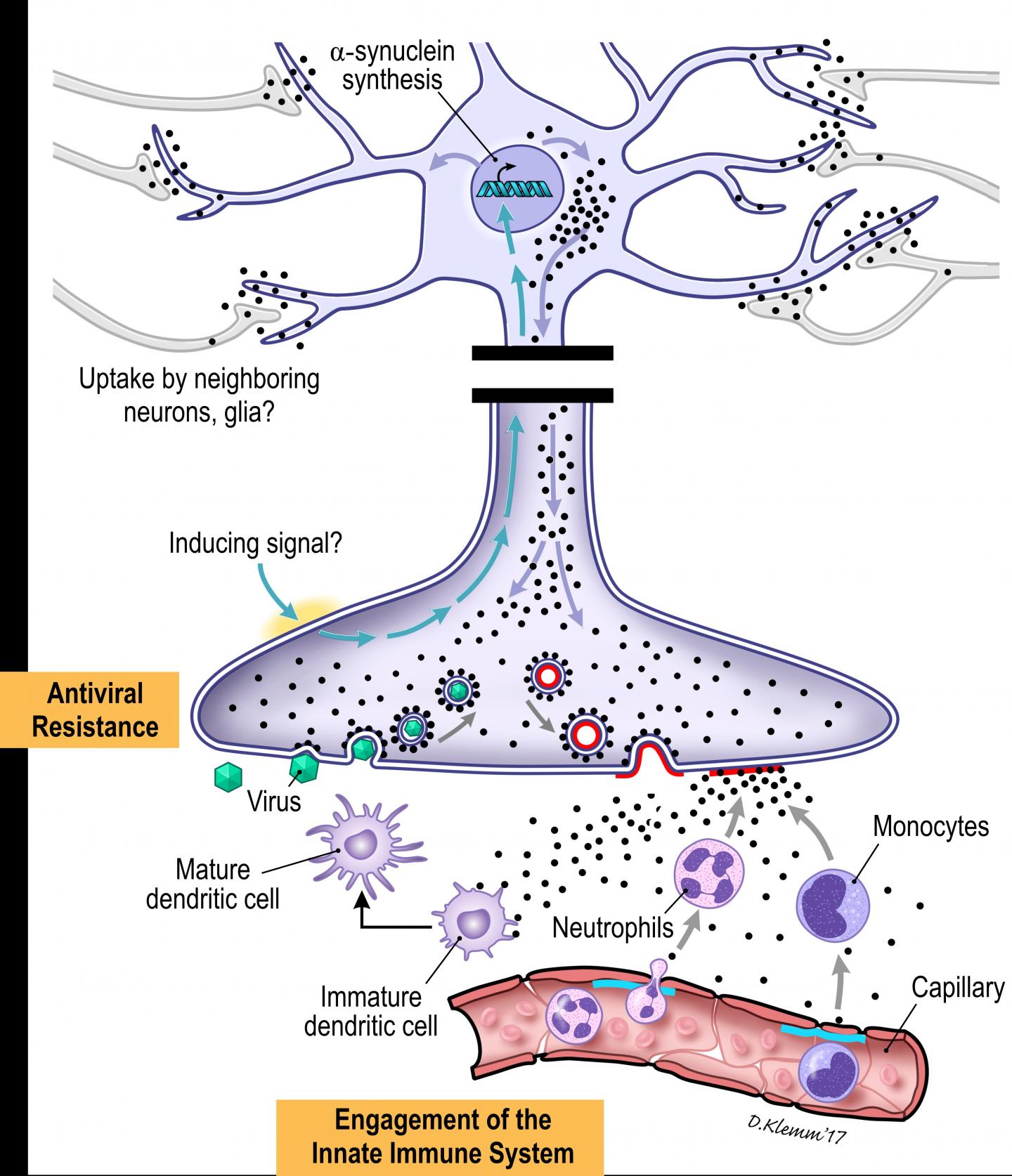 Credit: University of Groningen – The Netherlands

Amsterdam, NL, November 13, 2019 – Aggregates of the protein alpha-synuclein arising in the gut may play a key role in the development of Parkinson’s disease (PD). Investigators are testing the hypothesis that by targeting the enteric nervous system with a compound that can inhibit the intracellular aggregation of alpha-synuclein, they can restore enteric functioning in the short term, and possibly slow the progressive deterioration of the central nervous system in the long term. They review results to date in the Journal of Parkinson’s Disease.

“There is growing evidence that PD may start off in the gut,” explained senior author Michael Zasloff, MD, PhD, Enterin Inc., Philadelphia, PA, and MedStar Georgetown Transplant Institute, Georgetown University Medical Center, Washington, DC. “The concept is that aggregates of the protein alpha-synuclein, thought to play a key role in the disease, arise within the enteric nervous system (ENS) and travel up the peripheral nerves to the central nervous system (CNS) where they ultimately cause inflammation and destruction of parts of the brain. Targeting the formation of alpha-synuclein aggregates in the ENS may therefore slow the progression of the disease.”

Alpha-synuclein is one of the defensive proteins produced by enteric nerves when they encounter infections. In children with acute bacterial GI infections, for example, intestinal nerves produce alpha-synuclein. In children who have undergone intestinal transplants and who are prone to GI infections, investigators have shown that enteric neurons start making alpha-synuclein at the time of acute viral infections, and this outlasts the infection by many months, protecting nerve cells for prolonged periods of time. Within a nerve cell, alpha-synuclein could envelop invading viruses and disrupt their replication. It could also attach itself to small vesicles containing neurotransmitters and be released from the nerve cell hitching a ride with them. Once on the outside, it can attract protective immune cells from surrounding tissues.

“Recent data from our laboratory and others demonstrate that alpha-synuclein is induced in the setting of viral and bacterial infection and serves an immune function by protecting the ENS, by alerting the adaptive immune system and through pre-emptive defense of the CNS in advance of the infectious agent,” noted first author Denise Barbut, MD, FRCP, Enterin Inc., Philadelphia, PA. “In the setting of chronic GI infections or impaired intestinal barrier function, when the expression of alpha-synuclein exceeds its clearance, neurotoxic aggregates of alpha-synuclein form damaging aggregates in the ENS and traffic to the CNS.”

To determine whether targeting alpha-synuclein within enteric neurons might help patients with PD, Dr. Barbut, Dr. Zasloff and colleagues are currently conducting clinical trials with a compound called ENT-01 (Enterin Inc.). ENT-01 is a synthetic derivative of squalamine, a compound originally isolated from dogfish bile by Dr. Zasloff. It displaces alpha-synuclein from nerve cell membranes and restores the normal electrical activity of enteric neurons. Investigators completed a 50-patient Phase 2a study (RASMET) in patients with PD in 2018, which corrected constipation in more than 80% of participants, with the dose titrated up for each patient until a response was obtained. Constipation is a common symptom of PD.

According to Dr. Barbut, “The RASMET study demonstrated that the ENS is not irreversibly damaged in patients with PD, despite the longstanding constipation that might suggest otherwise. We believe that this is the first demonstration of the reversal of a neurodegenerative process in humans.” Beyond the bowel symptoms, possible benefits were also observed in motor and non-motor symptoms such as hallucinations, depression and cognitive function.

A 110-patient double-blind, placebo-controlled Phase 2b trial (KARMET) evaluating the effect of oral ENT-01 tablets on constipation and neurologic symptoms is currently being conducted.

PD is a slowly progressive disorder that affects movement, muscle control and balance. It is the second most common age-related neurodegenerative disorder affecting about 3% of the population by the age of 65 and up to 5% of individuals over 85 years of age.