A study conducted by researchers affiliated with São Paulo State University (UNESP) in Brazil shows that large mammals have a major impact on plant diversity, primary productivity and biomass in the understory of Neotropical forests. Species like the Lowland tapir (Tapirus terrestris) and White-lipped peccary (Tayassu peccari) help keep an ecological balance in areas such as the Atlantic Rainforest with different levels of productivity, while also influencing the spatial structure of plant communities. An article on the study is published in Perspectives in Ecology and Conservation. 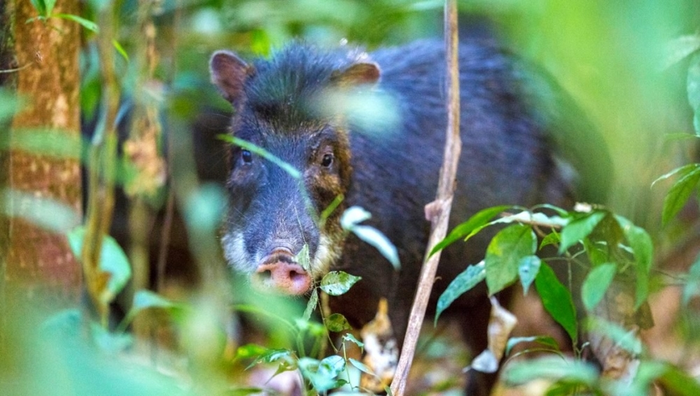 A study conducted by researchers affiliated with São Paulo State University (UNESP) in Brazil shows that large mammals have a major impact on plant diversity, primary productivity and biomass in the understory of Neotropical forests. Species like the Lowland tapir (Tapirus terrestris) and White-lipped peccary (Tayassu peccari) help keep an ecological balance in areas such as the Atlantic Rainforest with different levels of productivity, while also influencing the spatial structure of plant communities. An article on the study is published in Perspectives in Ecology and Conservation.

The animals eat the fruit and disperse the seeds, trampling the soil as they move through the forest and leaving behind large amounts of droppings. All this increases seedling productivity by up to 185% in less productive areas, while reducing it by more than 190% in more productive areas. As a result, differences in productivity between habitats are evened out.

Tapirs swallow fruit practically whole, chewing only the pulp. Seeds pass through their digestive system intact and reach the soil ready to germinate. They range over large areas and often defecate far away from the plants whose fruit they eat, carrying seeds from one side of a forest area to another, and changing the composition and diversity of the plant communities that live there.

Peccaries consume seeds and seedlings, reducing understory density and trampling the soil with their sharp hooves. These processes, combined with excretion, boost primary productivity understood as the production of new biomass in response to ecosystem carbon flows, among other factors.

“This spatial structuring phenomenon is poorly understood and hasn’t been studied in depth, but it’s a fundamental part of these species’ role as ‘forest engineers’. Indeed, scientists consider them foundational species in Neotropical forests. Our study shows how mammals affect forest dynamics in different ways. Depending on the number of palm trees, they increase or reduce productivity and affect biodiversity so that it all becomes more balanced,” Nacho Villar, first author of the article, told Agência FAPESP.

Villar’s research was supported by a scholarship from FAPESP. He is a postdoctoral fellow at the Institute of Biosciences (IB-UNESP) in Rio Claro.

FAPESP also supported the study via funding for two other projects (grants 14/01986-0 and 07/03392-6 for which the principal investigator was Mauro Galetti, a professor at IB-UNESP, under the aegis of the FAPESP Research Program in Biodiversity Characterization, Conservation, Restoration and Sustainable Use (BIOTA-FAPESP).

“Floristic censuses show that palms are dominant in terms of abundance in Neotropical forests such as the Atlantic Rainforest and the Amazon. Tapirs and peccaries are found throughout the Neotropics. So our findings probably apply to many other forests in the south and center of the American continent,” Villar said.

Mutual relations among the two animal species and E. edulis are ecologically key to biodiversity and productivity in the Atlantic Rainforest, he added. Hence the importance of their conservation. “Profound changes in primary productivity caused by defaunation [decline in populations of top predators and herbivores] have a significant impact on the forest’s capacity for carbon capture,” he said.
Several studies have shown that large mammals stimulate primary productivity in areas of tallgrass prairie such as African savannas, but this also happens in tropical forests, according to his group’s research. As noted by the latest study, extinction of large mammals, illegal cutting of Jussara palms for human consumption and deforestation generally lead to major changes in the structure, biomass and diversity of Neotropical forests.

According to SOS Mata Atlântica, a nonprofit founded in 1986 to promote conservation of the Atlantic Rainforest, only 12.4% of the biome’s original vegetation is left. In São Paulo State alone, deforestation rose 406% between 2019 and 2020 compared with 2018-19 (from 43 hectares to 218 hectares). Tapirs and peccaries are classed as endangered species in the state (the official list is at: http://dobuscadireta.imprensaoficial.com.br/default.aspx?DataPublicacao=20181129&Caderno=DOE-I&NumeroPagina=1].
“In 2019, we were told by the manager of a state park in São Paulo that many adult palm trees were felled in a single week. That changes the forest, which ceases to exist as we know it. It’s similar to climate change: people feel nothing’s happening but it is. It’s a tragedy,” Villar said.

The findings from the study were published during the 15th Conference of the Parties to the Convention on Biological Diversity (CBD COP15), whose first stage was held virtually in October 2021 and is due to be followed by a second stage in 2022. A biodiversity fund was set up to permit the implementation of actions for the protection and rehabilitation of ecosystems. The impact of climate change and ways to mitigate it were the focus for two weeks of discussion at the 26th Conference of the Parties to the UN Conference on Climate Change (UNFCCC COP26), held in Glasgow, Scotland, from October 31 to November 13, 2021.

The UNESP research group has been studying these topics for over ten years. Other publications include an article on a study that showed for the first time the importance of tapirs and peccaries to the nitrogen cycle in tropical forests, and concluded that ammonia levels were 9% lower in areas without these animals, reducing soil fertility. The group’s findings on the impact of interactions between palms and large mammals on the nitrogen cycle can now be placed alongside its research on primary productivity in the latest study, reinforcing the “fruiting sites” model.

Another previous paper by the group showed the contribution of tapirs and peccaries to plant diversity and abundance (more at: https://agencia.fapesp.br/31840/), as confirmed by the latest study.

Also in October, an article signed by Villar and Patrícia Medici, a Brazilian conservation biologist who focuses on tapirs, showed that diversity loss was lower in Atlantic Rainforest areas used by these animals than in areas from which they are excluded, highlighting the importance of their conservation and reintroduction to combat the global decline in forest biodiversity.

Medici founded and leads the Lowland Tapir Conservation Initiative, (Incab), which has the world’s largest database on the species. She won the 2020 Whitley Gold Award, awarded by the Whitley Fund for Nature to support grassroots conservationists in the global South.

To analyze the effects on tropical plant communities and primary productivity, the group conducted a number of exclosure experiments in two areas of Atlantic Rainforest. Exclosure experiments are designed to determine how areas develop if animals are excluded, in terms of biodiversity, vegetation height and ecological characteristics, among other factors.

The researchers set up experimental plots to exclude medium- and large-bodied mammals in a non-defaunated and defaunated forest area. Both sites are located in the northern portion of the Serra do Mar State Park in São Paulo State. They are about 15 km apart, and a heavy-traffic highway (BR-383) runs between them.

Fifteen pairs of plots were set up at every site, with one open plot for control and one exclosure plot. Each plot measured measured 5 m x 3 m. Damage to artificial seedlings, seedling recruitment, plant biomass and species richness were measured in three subplots with an area of 1 sq. m. every six months. Forest structure was measured in a 10 m radius from the center of the experimental plots.

This design permitted dual control, so that the landscape-scale consequences of the functional loss of large mammalian herbivores could be compared in defaunated areas (without tapirs or peccaries) and control areas (where both species were present). The researchers found that small animals such as agoutis (Dasyprocta spp.), Collared peccaries (Pecari tajacu), brocket deer (Mazama spp.) and pacas (Cuniculus spp.) did not affect the ecosystems as much as tapirs and large peccaries.

“In the article, we stress spatial aspects more than temporal ones, showing how the animals structure primary productivity and the forest spatially, not how communities diverge over time,” Villar said.

According to the study, large herbivores had positive and negative effects on the spatial structure of plant communities, as a result of their interactions with palms in non-defaunated forest areas. In defaunated areas, however, they did not have consistent effects on plant recruitment or species richness across the gradient of palm density, although they did have consistently negative effects on seedling productivity.

According to Villar, next steps for the research line will entail analyzing the influence of large mammals on these cycles, on the links between, soil, understory and canopy, on the vertical and horizontal structure of the forest, and on other important functional groups, such as invertebrates and pathogens.

Perspectives in Ecology and Conservation