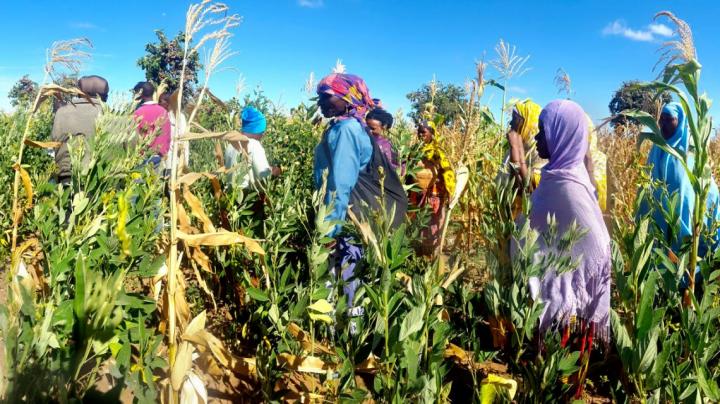 ITHACA, N.Y. – A project based in Tanzania found significant improvements in the diversity of children’s diets and food security for households after farmers learned about sustainable crop-growing methods, gender equity, nutrition and climate change from peer mentors.

The farmers experimented with practices introduced to them by Malawian farmers and Tanzanian and American scientists, decided which ones to incorporate within their own farms, and met monthly to share experiences and problem-solve.

The three-year study builds on longer-term research where these environmentally-friendly farming methods, called agroecology, combined with peer-mentoring and farmers collaborating in the process, had successfully improved adult nutrition in Malawi.

“There were a lot of questions about whether an approach that is effective in one context can work in other contexts,” said Rachel Bezner Kerr, professor of global development in the College of Agriculture and Life Sciences at Cornell University and co-author of the study that published May 11 in the Journal of Nutrition.

Agroecology applies ecological principles to agriculture in a holistic manner. In trainings for this study, farmers learned about practices such as intercropping, in which several crops are planted together in the same beds, to provide diversified foods while also reducing pests that thrive in monocultures. Farmers decided which agroecological practices they wanted to test, such as environmentally safe botanical pesticides from local plants or adding compost and manure to improve soil health.

American and Tanzanian researchers invited food-insecure smallholder farmers with children under 1 year old from 20 villages in Singida, Tanzania, to participate. Ten of the villages began the program, while the other 10 served as a control group for two years before they too were taught the practices.

In total, 600 households participated, split evenly between the intervention and control groups. Before training began, the researchers conducted surveys about nutrition, farming practices, and gender equity and measured children’s growth. Over the course of the program, these things continued to be assessed. Households in the intervention group were given about a pound of legume seeds of their choice, including cowpea, groundnut and pigeon pea, which enriched soil with nitrogen and added diversity to staple sorghum, millet and corn crops they grew. Farmers were able to save legume seeds from crops they grew for the following year.

At the start of the program, a group of 20 farmers that included one man and one woman from 10 villages were selected to be peer mentors in their communities. They were brought to Malawi to learn about different practices used by the Malawian farmers.

Then, Malawian peer-mentors traveled to Tanzania to teach a two-week agroecology course co-designed by farmers and researchers. The integrated curriculum had hand-on activities on agroecology, gender and social equity, child nutrition and climate change.

The researchers measured food security, children’s dietary diversity and agricultural practices within households. They used a standard set of questions about diets and foods consumed in each category to arrive at a minimum dietary diversity score.

“We found that this intervention approach of combining agroecology with attention to nutrition and gender equity led to improvements in food security and children’s dietary diversity for households that were food insecure at the start of the intervention,” Bezner Kerr said.

Santoso is a postdoctoral research fellow in the Department of Anthropology at Northwestern University. She is supported by a competitive research fellowship through the Innovative Methods and Metrics for Agriculture and Nutrition Actions program.

The study was funded by the Collaborative Crop Research Program of the McKnight Foundation, the Cornell Atkinson Center for a Sustainable Future, the National Institutes of Health and the Borlaug Fellows in Food Security Program.