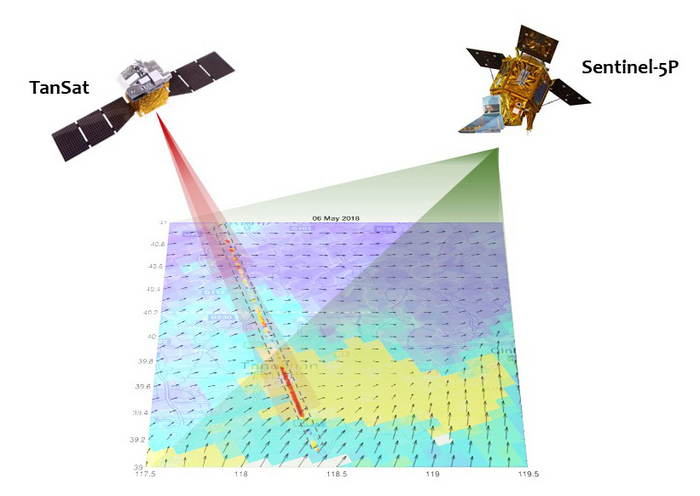 The team, with researchers from the Chinese Academy of Sciences and the Finnish Meteorological Institute, published their research in the journal Advances in Atmospheric Sciences on October 25.

Carbon dioxide is recognized as the most important anthropogenic greenhouse gas because of its significant impact on global warming and climate change. Because of this, a number of satellite missions dedicated to atmospheric greenhouse measurements have been developed in the last decade.

At the United Nations Climate Change Conference held in Paris in 2015, participants agreed to reduce greenhouse gas emissions to prevent global surface temperature increases. Slowing down global warming represents a challenge faced by the global population in the 21st century. Concentrations of carbon dioxide continue to rise because of anthropogenic activities such as fossil fuel combustion and land-use change. The emissions related to the combustion of fossil fuels are particularly localized, with urban areas being the dominant contributor responsible for more than 70% of global emissions. Yet it has been especially challenging for scientists to obtain the high precision measurements they needed to study anthropogenic emissions from cities.

TanSat, launched in 2016, is China’s first global carbon dioxide monitoring satellite. Tan is Chinese pronunciation of carbon. While TanSat has been providing researchers with data for several years, new algorithms were recently added to the TanSat instruments that greatly improved TanSat’s measurement precision.

The team conducted their study looking at two sets of measurements collected over two cities. The team used TanSat carbon dioxide data captured in May 2018 near Tangshan, China, and in March 2018 near Tokyo, Japan. They compared the TanSat data to nitrogen dioxide measurements captured by the TROPOspheric Monitoring Instrument onboard the Copernicus Sentinel-5 Precursor satellite on the same dates over the same cities.

“We analyzed TanSat data in synergy with European Copernicus Sentinel-5 Precursor TROPOMI nitrogen dioxide observations to help the detection of anthropogenic plumes and to analyze the carbon dioxide-to-nitrogen dioxide ratio,” said Dongxu Yang, from the Institute of Atmospheric Physics, Chinese Academy of Sciences.

Their two case studies show TanSat carbon dioxide measurements have the capability to capture the anthropogenic variations in the plume and have spatial patterns like that of the TROPOspheric Monitoring Instrument’s nitrogen dioxide observations. In addition, the carbon dioxide-to-nitrogen dioxide ratio in Tangshan, China, and Tokyo, Japan, align with the emission inventories.

“This is an important step in TanSat data analysis. The next step is to infer emissions and to prepare for the TanSat-2 constellation including the joint analysis of CO2 and NO2 plumes,” said Janne Hakkarainen, from the Finnish Meteorological Institute.

Looking ahead, the team has plans to expand this research. “The TanSat is our first attempt on global carbon monitoring. The next generation of China’s Global Carbon Dioxide Monitoring Satellite mission, TanSat-2, is now in the design phase,” said Yi Liu, from the Institute of Atmospheric Physics, Chinese Academy of Sciences.

According to Liu, TanSat-2’s target measurements will focus on cities with an 800–1000 kilometer wide swath to record the gradient of carbon dioxide from city central to rural areas using an imaging process and a 500 meter footprint size to improve the emission estimation accuracy. TanSat-2 will be a constellation of satellites distributed into at least two orbits in the morning and afternoon to cover a city or a point source twice a day.

“Our goal is to use satellite measurements to improve our knowledge on carbon cycle and to further analyze and constraint the carbon dioxide sources and sinks and their uncertainties,” said Liu.

The research team includes Dongxu Yang, Yi Liu, Zhaonan Cai, from the Institute of Atmospheric Physics at the Chinese Academy of Sciences, and Janne Hakkarainen, Iolanda Ialongo, and Johanna Tamminen, from the Finnish Meteorological Institute.