Taking on the triple threat of identifying the best organ donor, the earliest signs of transplant rejection and a better way to stop it

AUGUSTA, Ga. (Jan. 10, 2023) –  Whether a humanized mouse model that shows great promise in identifying a patient’s best match for a living organ donor also holds promise for recognizing the earliest signs that the recipient’s immune system may start attacking that new organ is a question scientists want to answer. 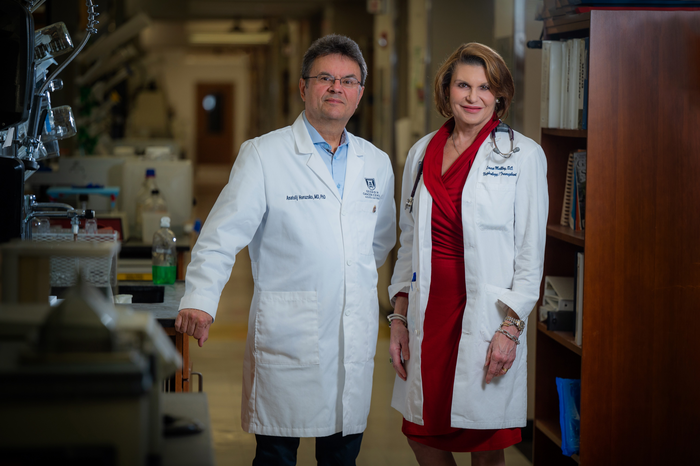 AUGUSTA, Ga. (Jan. 10, 2023) –  Whether a humanized mouse model that shows great promise in identifying a patient’s best match for a living organ donor also holds promise for recognizing the earliest signs that the recipient’s immune system may start attacking that new organ is a question scientists want to answer.

“Current monitoring of patients picks up signs of damage to their transplanted kidney,” says Anatolij Horuzsko, MD, PhD, immunologist in the Georgia Cancer Center and Department of Medicine at the Medical College of Georgia at Augusta University. “That means the new kidney will no longer function optimally and may continue to decline. We’d like to intervene before that.”

Horuzsko is principal investigator on a new $1 million grant from the Carlos and Marguerite Mason Trust that will help identify the early presence of immune cells before they attack the new organ so the immunosuppressant medications the patient is taking can be modified to try and avert organ damage. The humanized mouse model he developed has the immune system of a specific transplant recipient, which can be exposed to blood of different potential living donors to see if it’s a good immunologic match and he has evidence it also can portend trouble ahead.

He also is looking further at a more natural, efficient and targeted way to deflect a destructive immune response with HLA-G, an immune molecule known to help the fetus, which has both father and mother’s DNA, escape attack by the mother’s immune system. Horuzsko, a leader in the field of HLA-G study, has shown that patients who have naturally higher levels of HLA-G have fewer problems with rejection and generally need fewer standard pharmaceuticals to help tamp down their immune response. Why some people have a higher level remains a mystery. But the scientists also are further refining a synthetic version, which is basically a double-dose of HLA-G, with the goal of one day giving it to patients as a more natural alternative to current immunosuppressive drugs.

If it is, that could one day mean patients with naturally high activity of these cells likely would need less anti-rejection drug therapy, Horuzsko says. It also might point out who could benefit most from the synthetic HLA-G his lab is developing.

Back to the clues the humanized mouse model he developed may provide, Horuzsko notes that chronic kidney transplant rejection is slowly progressive and symptoms may not surface until late in the process. Current testing to monitor for rejection essentially show signs that it’s happening.

Today’s long list of approaches for detecting indicators of rejection include methods like looking at levels of creatinine, a waste product generated by using your muscles that normally is eliminated in the urine. High levels in the blood and/or low levels in the urine indicate that the kidney is not functioning optimally. Creatinine levels also are regularly measured in the blood of patients who still have their own kidneys as a measure of their health.

But Horuzsko notes that by the time creatinine levels, for example, are concerning, there is some degree of damage to the transplanted kidney. A biopsy of the kidney to look for damage remains another gold standard for detecting rejection, but the invasive test has its own complications that can damage the kidney.

Noninvasive, predictive donor-specific biomarkers are “highly desirable,” Horuzsko says. His study, published in the summer of 2021 in the journal Frontiers in Immunology showed that the humanized mouse model provided a more comprehensive prospective of how the patient’s immune system would react to a prospective living donor’s kidney that was more predictive than today’s standard. Dr. Laura Mulloy, chief of the MCG Division of Nephrology, and Horuzsko’s longtime clinical collaborator, calls the mouse model a more comprehensive, specific test.

Today, a handful of proteins on the surface of the donor’s and potential recipient’s cells are used to gauge how aggressively the recipient’s immune system will respond, in a process called human leukocytic antigen, or HLA, testing. A strong immune response indicates a strong possibility that the new organ will come under attack and that more drugs, which suppress the recipient’s immune system, will be needed. While continuously improved, today’s immunosuppressive drugs still leave patients more vulnerable for a variety of conditions the immune system typically helps control from viral infections to cancer.

As a way to see if this personalized approach also can improve immune  system surveillance, they will be creating additional humanized mouse models for recipients periodically after transplant and again challenging them with cells from the selected donor’s blood to see how the interaction may have changed. They will look at activation of key drivers of transplant rejection in the recipient, like CD8+ T cells, known to attack invaders with some nasty, destructive proteins like granzyme B and perforin, which kill off target cells. They will also monitor for the presence of biomarkers of these and other troublemakers as well as protective molecules like HLA-G, to analyze what constitutes a healthy or unhealthy mix for the new organ.

Horuzsko’s lab has already shown, for example, that HLA-G can inhibit activation of killer cells like CD8+ T cells.  Genomic analysis will help determine which genes are responsible for recruiting these killer cells to the transplanted kidney. Some 100 genes are already identified as players in transplant rejection but are not currently monitored in patients, he says. They are looking at those and all 27,000 human genes in the search for others.

“We are fighting to prolong kidney survival,” Horuzsko says. “We need to see the whole picture.”

The blood contains the components of the immune system. To build a humanized mouse model Horuzsko’s team worked for about five years to develop a method to isolate those components from a patient needing a transplant then reconstruct their immune system in a mouse that does not have one. Each potential living donor’s blood is then given to this engineered mouse to check how the recipient’s immune system should respond.

Now, they are increasing the number of patients for whom they are using the humanized mouse model to assess living donor candidates to ensure that the early success they have seen holds as time progresses for the 21 patients originally enrolled, as well as new ones. At this point, the new approach is used in addition to traditional HLA testing with the traditional test response still used to select a donor until studies of the new technique are complete.

Chronic rejection is the most common reason kidney transplants fail. Living donors result in the best success although more than half of transplants are with cadaver donors.