TORONTO, June 28, 2022 – Tadpoles see well underwater, but what happens when they become frogs and live primarily on land? Researchers at York University and several other institutions, curious about the answer, found the eyes of tadpoles undergo a surprising number of changes. 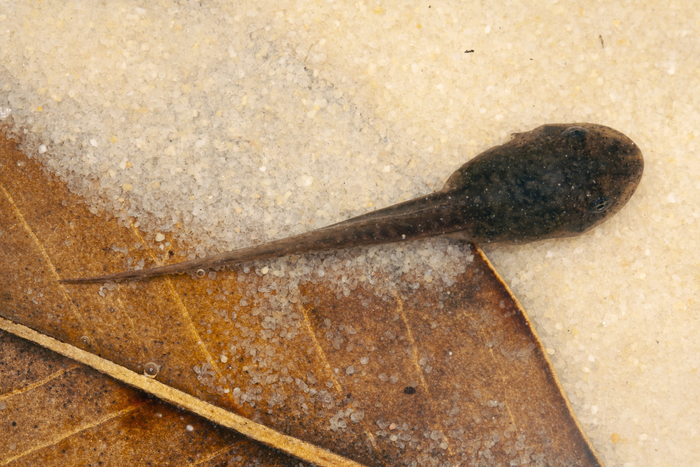 TORONTO, June 28, 2022 – Tadpoles see well underwater, but what happens when they become frogs and live primarily on land? Researchers at York University and several other institutions, curious about the answer, found the eyes of tadpoles undergo a surprising number of changes.

It’s already known that tadpoles go through a physical metamorphosis on their way to becoming a frog, but what wasn’t known is how their vision adapts at a molecular level across the life stages to a strikingly different environment.

York University Assistant Professor Ryan Schott, who studies the visual system of vertebrates in the Faculty of Science, along with an international team of researchers, examined the eyes of southern leopard frogs to find out if and how they changed.

“Seeing underwater is not the same as seeing on land. The light underwater can have more of a reddish cast, especially in ponds where many frogs live, while the light on land is bluer. The amount of light is also different under water versus on land. Animals that see well in one environment will likely not see clearly in the other. We were interested in finding out what changes occur that allow an animal to go from seeing underwater to seeing on land,” says Schott, who led the study and is the corresponding author.

“The adaptive decoupling hypothesis proposes that animals that have distinct life stages separated by metamorphosis, like caterpillars to butterflies or tadpoles to frogs, might be more able to adapt to their different environments.”

The researchers explored changes in gene expression in the eyes of leopard frog tadpoles and juvenile frogs using RNA sequencing, allowing them to see the levels of gene expression, or which genes were turned on in the eyes. They also used microspectrophotometry to measure whether the photoreceptor cells in the eyes were more sensitive to the redder or bluer parts of the light spectrum at different life stages. These photoreceptor cells send light signals through the retina to the brain and are what allows animals, including humans, to see.

What they found surprised them. “The difference in the gene expression levels that we found in their eyes across the life stages was much higher than expected and a high proportion of them are genes that are directly involved in vision, which was an exciting result,” says Schott.

They found 42 per cent of genes in the eyes of tadpoles changed, were differentially expressed, once it metamorphosized into a frog.

The team, including researchers from the Smithsonian Institution, Cornell University, The Natural History Museum in London, United Kingdom, the California Academy of Sciences, and the University of Texas at Arlington, also found the genes that control visual function and development, including spectral sensitivity and lens composition, changed the most.

The eyes of tadpoles had shifted and adapted to see better in a bluer light environment as they changed to a juvenile leopard frog – living and seeing on land – compared to the redder light environment of the freshwater habitat they live in as tadpoles.

The paper, Transcriptomic evidence for visual adaptation during the aquatic to terrestrial metamorphosis in leopard frogs, was published today in the journal BMC Biology.