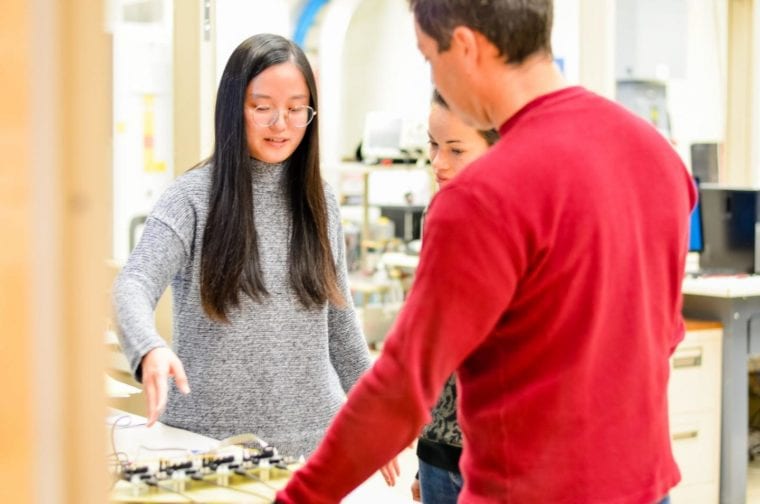 The Department of Energy has awarded four Virginia Tech researchers a $1.8 million grant to reduce the stress renewable energy sources put on the U.S. power grid.

The Virginia Tech Center for Power Electronics Systems (CPES) and the Power and Energy Center (PEC) will partner with Siemens to tackle this challenge.

With the dramatic increase in levels of carbon dioxide and other greenhouse gases, renewable energy sources, such as concentrating solar power and photovoltaics, have been implemented to reduce these emissions. According to the Solar Energy Industries Association, the electric power industry sector is the highest producer of greenhouse gas emissions in the United States.

More than a third of greenhouse gases released into the atmosphere are a result of the burning of fossil fuels for electricity usage. Concentrating solar power and photovoltaics are emissions-free alternatives that can feed electricity directly into the U.S. power grid.

“In the grand scheme, we need more energy. The energy consumption is increasing. The way to handle that in a smarter way is renewable energy sources, which continue to increase,” explained Rolando Burgos, associate professor in the Bradley Department of Electrical and Computer Engineering. “About 12 percent of power generation in the U.S. is wind and solar. Ten years ago this number was 1 percent. So, this has been a very rapid growth and it is projected to continue at a similar pace.”

However, increased use of these renewable energy alternatives presents a new challenge to the grid. In order for the power grid to function properly, power generated has to be matched to the power consumed, defined as load. Solar and wind energy sources rapidly change or vary throughout the day, thus creating fast imbalances in the generation-to-load consumption. A higher load will reduce the operating voltage and frequency, and a lighter load will inversely affect the grid. Disturbing the grid in such a way can cause the whole grid to collapse, producing blackouts.

Burgos, along with three other co-investigators, Dushan Boroyevich, Chen-Ching Liu, and Virgilio A. Centeno, all electrical and computer engineering professors, will work together for the next three years to develop a modular power converter based on highly efficient wide-bandgap semiconductors to lessen the stress renewable energy sources put on the power grid.

Historically, industries have relied on small generation units, called peaking generators, to keep the generation-to-load consumption in power grids balanced. Due to the increase in renewable energy sources, these units alone are no longer fast enough to respond to the imbalances produced.

This is where the Virginia Tech research team comes in.

The Center for Power Electronics Systems will develop a modular multilevel converter that will allow for the selling of power, control over the amount of power used, regulation of the voltage and frequency, and a faster response time to grid disturbances. The converter will be more cost-efficient, reliable, and energy efficient, helping to mitigate the stress create by the growth in renewable energy.

Researchers will also add a new grid-stability-monitoring capability to the power converter, allowing the flexible combined heat and power systems to operate safely within the physical limits of the electrical grid.

Additionally, “The Power and Energy Center will work closely with Siemens to integrate the flexible heat and power systems into a microgrid environment, using Siemens’ digital control platform to manage the operation of the microgrid that will be able to dispatch the flexible combined heat and power systems’ grid-support functions as needed, and fully autonomously,” said Burgos.

“This is why we were selected,” said Burgos. “Here [at Virginia Tech], we have a strong electronics group and a strong power systems group, so now we can work together, thanks to the College of Engineering that has been instrumental in supporting the collaboration of these two groups over the past several years.”

An unexpected mode of action for an antibody

How the immune system protects us against bowel cancer