T. rex used a stiff skull to eat its prey 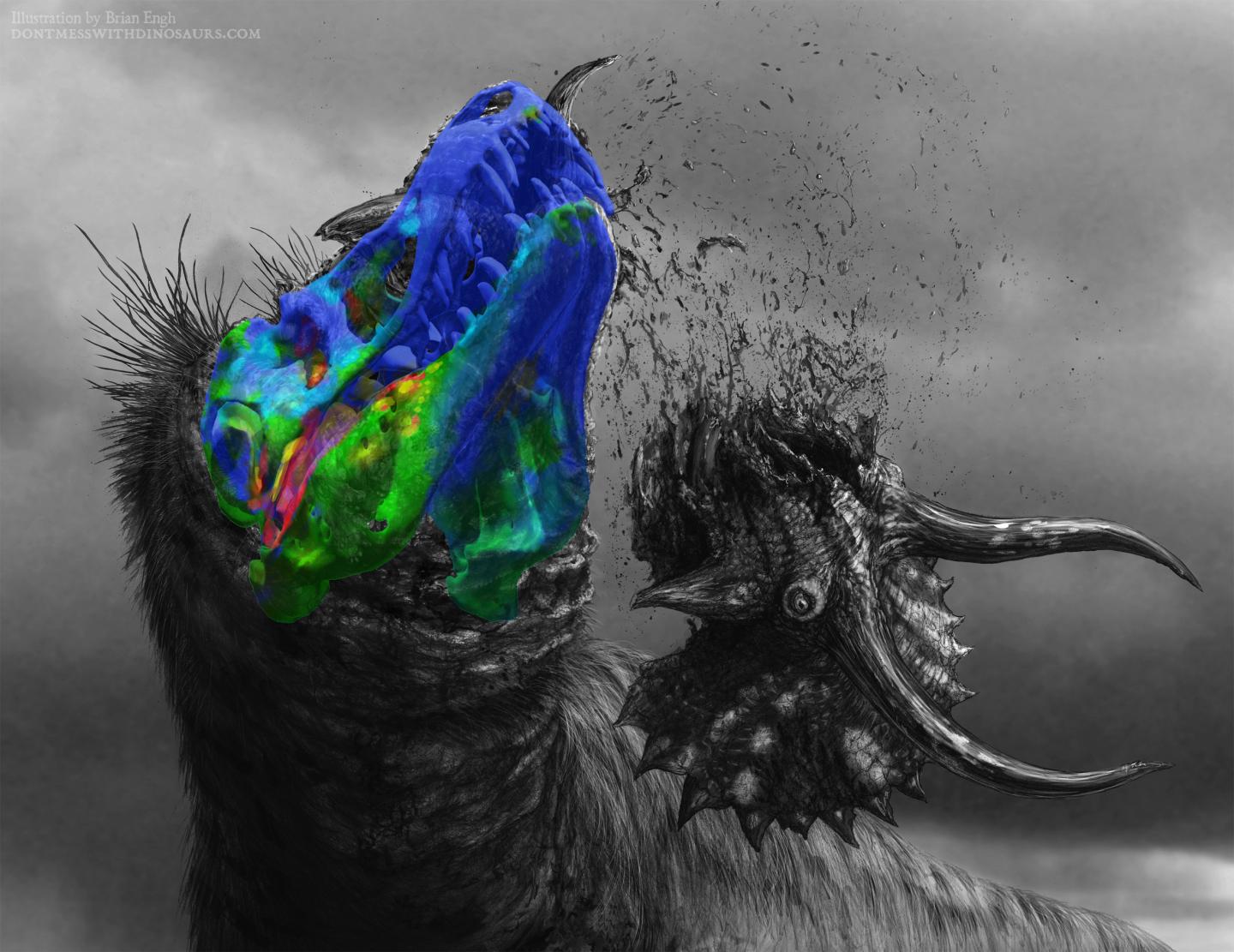 A Tyrannosaurus rex could bite hard enough to shatter the bones of its prey. But how it accomplished this feat without breaking its own skull bones has baffled paleontologists. That’s why scientists at the University of Missouri are arguing that the T. rex’s skull was stiff much like the skulls of hyenas and crocodiles, and not flexible like snakes and birds as paleontologists previously thought.

“The T. rex had a skull that’s 6 feet long, 5 feet wide and 4 feet high, and bites with the force of about 6 tons,” said Kaleb Sellers, a graduate student in the MU School of Medicine. “Previous researchers looked at this from a bone-only perspective without taking into account all of the connections — ligaments and cartilage — that really mediate the interactions between the bones.”

Using a combination of imaging, anatomy and engineering analysis, the team observed how the roof of the mouth of the T. rex reacted to the stresses and strains from chewing by applying models of how two present day relatives of T. rex — a gecko and a parrot — chew to how the T. rex skull worked.

“Dinosaurs are like modern-day birds, crocodiles and lizards in that they inherited particular joints in their skulls from fish — ball and socket joints, much like people’s hip joints — that seem to lend themselves, but not always, to movement like in snakes,” said Casey Holliday, an associate professor of anatomy in the MU School of Medicine. “When you put a lot of force on things, there’s a tradeoff between movement and stability. Birds and lizards have more movement but less stability. When we applied their individual movements to the T. rex skull, we saw it did not like being wiggled in ways that the lizard and bird skulls do, which suggests more stiffness.”

In addition to helping paleontologists with a detailed study of the anatomy of fossilized animals, researchers believe their findings can help advance human and animal medicine by providing better models of how joints and ligaments interact.

“In humans, this can also be applied to how people’s jaws work, such as studying how the jaw joint is loaded by stresses and strains during chewing,” said Ian Cost, the lead researcher on the study. Cost is an assistant professor at Albright College and a former doctoral student in the MU School of Medicine. “In animals, understanding how those movements occur and joints are loaded will, for instance, help veterinarians better understand how to treat exotic animals such as parrots, which suffer from arthritis in their faces.”

The study, “Palatal biomechanics and its significance for cranial kinesis in Tyrannosaurus rex,” was published in The Anatomical Record. Other authors include Kevin Middleton of the MU School of Medicine; M. Scott Echols of The Medical Center for Birds; Lawrence Witmer of Ohio University; and Julian Davis of University of Southern Indiana. Funding was provided by the National Science Foundation, Jurassic Foundation, Missouri Research Council, Missouri Research Board and MU Department of Pathology and Anatomical Sciences. The content is solely the responsibility of the authors and does not necessarily represent the official views of the funding agencies.