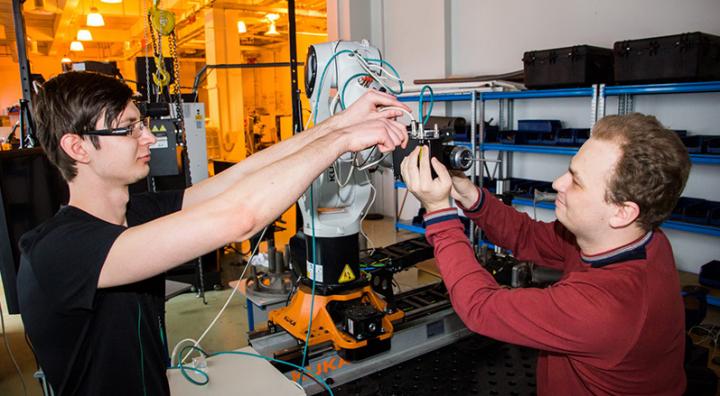 Scientists of the Far Eastern Federal University (FEFU) and the Far Eastern Branch of the Russian Academy of Sciences (FEB RAS) have developed a brand-new universal system for intelligent control of robotic systems. After the development was implemented at the Russian plant “Dalpribor” in Vladivostok the outcome rate in its locksmith section of the cast billets increased by three times and defects eliminated.

Researchers point out that it’s possible to expand the functionality of modern robots by means of innovative control systems. The developers of FEFU and the FEB RAS are focusing on increasing the intelligence of industrial robots and propose a new approach by which is possible to adjust the work program directly during the machining of details. The authors of the development are the professors of the FEFU School of Engineering and the research fellows of the Far Eastern Branch of the Russian Academy of Sciences Alexander Zuev and Anton Gubankov.

“We offer a solution in the form of an intelligent information management system. Receiving information from technical vision and a digital model correlation of the product, the robot by itself determines the contours of the parts and corrects the movement of the working tools throughout the entire process. This technology increases productivity greatly and reduces costs,” said Alexander Zuev.

Vladimir Filaretov, head of the Department of Automation and Control at FEFU, added that the new system allows planning the robot’s trajectory in an environment with unknown obstacles, increasing the speed and accuracy of movements along planned trajectories, as well as quickly track any defects. Thus, underwater robots, as well as industrial manipulators, can work more accurately and faster under uncertain conditions with productivity increased many times.

The system of the intelligent control of robots can be used for a variety of devices of the new generation. In 2019 the development will be nominated for the Russian Federation Government Prize in Science and Technology for young scientists.

In the development also took part recent FEFU alumni Fedor Dubrovin and Alexander Konoplin, who now are researchers in the Institute for Marine Technology Problems of the Far Eastern Branch of the RAS.

Scientists use microorganism to fabricate functional bacterial cellulose in situ

Corals survive to tell the tale of Earth’s newest island…