A research team led by Prof. YU Tao from the Shenzhen Institute of Advanced Technology, Chinese Academy of Sciences, has proposed a novel synthetic energy system that supports yeast cell growth and the production of highly reduced chemicals. 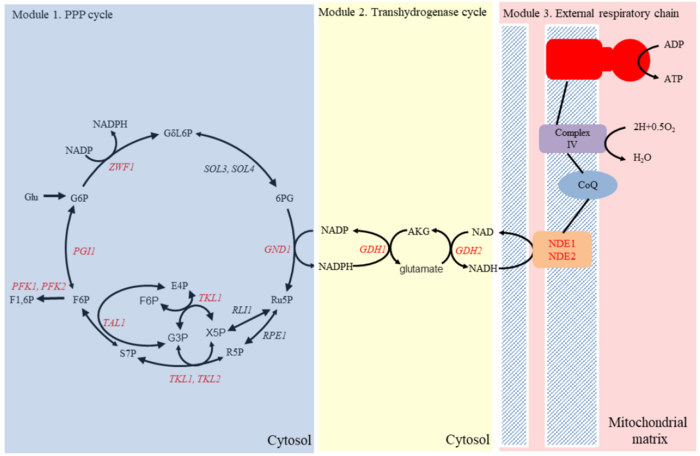 A research team led by Prof. YU Tao from the Shenzhen Institute of Advanced Technology, Chinese Academy of Sciences, has proposed a novel synthetic energy system that supports yeast cell growth and the production of highly reduced chemicals.

The research was published in Nature Metabolism on Oct. 27.

Cell metabolism has been optimized for self-proliferation instead of production of specific chemicals in the evolutional process. In contrast, rational design plus metabolic reconfiguration using modern biotechnology enables the transformation of cells into high-yield factories.

For production of highly reduced chemicals, e.g., free fat acids (FFAs) as a kind of biofuel, cells need to consume energy and overcome the stoichiometric constraints of chemical composition between the substrate and target product. Thus, rewiring reductive/energy metabolism becomes an effective solution.

In this study, the synthetic energy system contains three modules: the pentose phosphate (PP) cycle, the trans-hydrogenase cycle and the external respiratory chain. The PP cycle is a repeated decarboxylation cycle, in which large amounts of reductants, e.g., nicotinamide adenine dinucleotide phosphate (NADPH), are generated. Then the trans-hydrogenase cycle can irreversibly transfer one NADPH into one nicotinamide adenine dinucleotide (NADH) in the cytoplasm. Through the external respiratory chain, energy can be generated from cytosolic NADH.

The researchers tested an evolved pyruvate decarboxylase-deficient strain E1B. After overexpressing the PP cycle and the blocking of glycolysis, the strain could not grow on glucose because of excess NADPH accumulation. Expression of the trans-hydrogenase cycle restored normal cell growth. In the context of the synthetic energy system, cell growth improved instead of being weakened as the endogenous energy system was down-regulated, indicating that the system can become an alternative for supplying energy for better cell growth.

As for reductive chemical production, a succinate titer of approximately 3.3 g/L was achieved. Integrated with a ratio fine-tuned between precursors, cofactors and energy, the synthetic energy system raised the yield of FFAs to 40% of the maximum theoretical yield, which is the highest yield reported for Saccharomyces cerevisiae and demonstrates the potential of the system for industrial scale production.

“Energy metabolic reprogramming demonstrates that despite extensive regulation of catabolism in yeast, it is still possible to rewire their energy metabolism,” said Prof. YU.