Synthesis of tetraphenylammonium, a phantom ion whose existence had not been confirmed 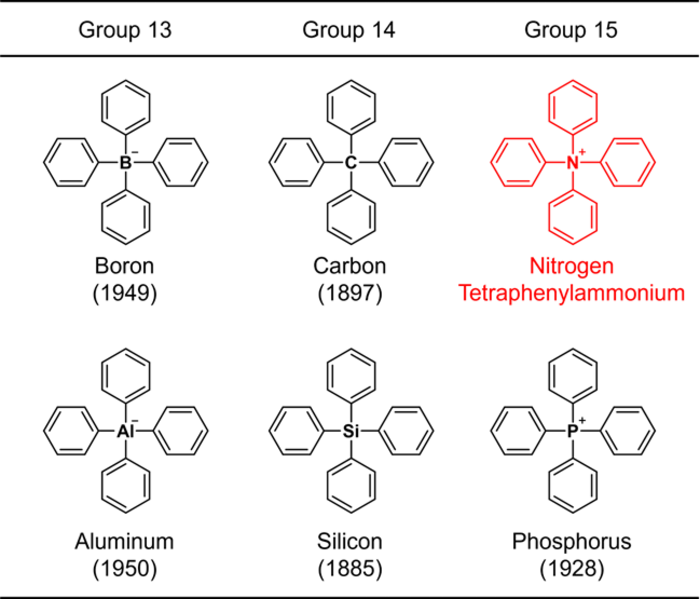 Since the benzene ring is a representative constituent of organic compounds, a structure consisting only of a common element plus the benzene ring is considered to be one of the most fundamental chemical skeletons. Due to their importance, chemical synthesis of such molecules has been studied since the early days of organic chemistry. For example, the structure in which four benzene rings are bonded to a representative element (boron, carbon, aluminum, silicon, or phosphorus) of groups 13 to 15 in the periodic table (Fig. 1) was synthesized more than 70 years ago, and the oldest synthetic report dates back 137 years. These skeletons are collectively referred to as “tetraphenyl” structures by adding “tetra” meaning “4” to “phenyl”*1), which means that the structure contains 4 benzene rings. When the central element is nitrogen, ammonium, NH4+, is regarded as the parent ion. Such a compound is called tetraphenylammonium. This compound, in fact an ion, has a very simple chemical structure that even a beginner in organic chemistry can easily imagine. Nevertheless, it has proved to be very difficult to artificially create this structure, and no synthetic reports with clear structure identification have been published. Furthermore, since it has not been discovered in nature, it has not been clear until now whether tetraphenylammonium can exist at all. Publications have appeared that assume its existence and mention only its use without describing its synthesis or acquisition method. Compound databases contain only the chemical structure. Thus this ion is sometimes referred to as if it were already known. However, in reality, no one has actually observed it, making tetraphenylammonium a “phantom ion.”

In this study, a research team at the Faculty of Pharmaceutical Sciences, Kanazawa University has enabled the synthesis of tetraphenylammonium by establishing a novel synthetic strategy. The critical point in the synthesis of tetraphenylammonium is the addition of the fourth phenyl group to the nitrogen atom that already has three phenyl groups attached. It was thought to be difficult to achieve this synthesis with conventional techniques. In the present study, therefore, the research team applied a technique called radical coupling*2) and used a strategy of reacting the radical cation 1 prepared from a triphenylamine derivative with the phenyl radical 2 (Fig. 2). As a result, although the yield was as low as 0.1%, the research team succeeded in performing the desired chemical conversion. In such radical couplings, highly reactive radicals form bonds with each other, which has the advantage of enabling bond formation that could not be achieved by other methods. On the other hand, it has the disadvantage that it is difficult to control selectivity because the reactivity is too high, leading to various side reactions. Therefore, in this synthesis, in order to suppress as much as possible the side reaction of bond formation on the carbon of radical cation 1, the research team also devised the introduction of protecting groups*3) that cause steric hindrance. Finally, a total of five steps of chemical conversion of a known triphenylamine derivative, the starting material for the synthesis, were carried out through the introduction of the protecting groups, radical coupling, and subsequent removal of the protecting groups, leading to tetraphenylammonium.

Based on the data obtained from various instrumental analyses, the structure of tetraphenylammonium was confirmed. X-ray crystallography*4) revealed that the bond length between the nitrogen atom and the phenyl group carbon atom contained in this ion is only 1.529 Å (Fig. 3). Since this bond length is shorter than that of a tetraphenyl structure containing another element (boron, carbon, aluminum, silicon, or phosphorus), it is evident that the nitrogen atom of tetraphenylammonium is in a more spatially hindered environment than other elements. This three-dimensional hindrance is considered to be one of the factors that make it difficult to construct this skeleton. Further, our results also revealed that tetraphenylammonium has a high stability to withstand strongly acidic and basic conditions.

The present study has demonstrated that tetraphenylammonium does in fact exist and can be chemically synthesized. If large-scale synthesis of this ion and its derivatives is realized in the future, it could potentially be applied in various research fields as an organic cation with high chemical stability. Furthermore, the radical coupling strategy used in this study may be applicable to the synthesis of other related ammoniums that could not be made so far.

*1) Phenyl
A phenyl group is the name of an atomic group/substituent formed from benzene (C6H6) by removal of one hydrogen atom. This represents the simplest and most basic structure of an aromatic carbon group. When a hydrogen atom contained in an ion or other molecule is replaced by a phenyl group, the prefix “phenyl” is used.

*2) Radical coupling
A reaction in which two radicals form a bond. Electrons contained in a molecule generally form pairs, while radicals have highly reactive unpaired electrons. Thus a radical has a high tendency to undergo a reaction to form a chemical bond with another radical to create a shared electron pair. For the synthesis in this study, radical cations, positively charged radicals, were used in the reaction.

*3) Protecting group
Substituents that are temporarily introduced to suppress unwanted reactions that may take place at other functional groups or positions in the molecule during a particular chemical transformation. Protecting groups allow for selective chemical conversions. However, the protecting group needs to be removed at a later step.

*4) X-ray crystallography
An analytical method that uses the diffraction of X-rays to determine the structure of molecules in a crystalline state.

Synthesis and characterization of tetraphenylammonium salts