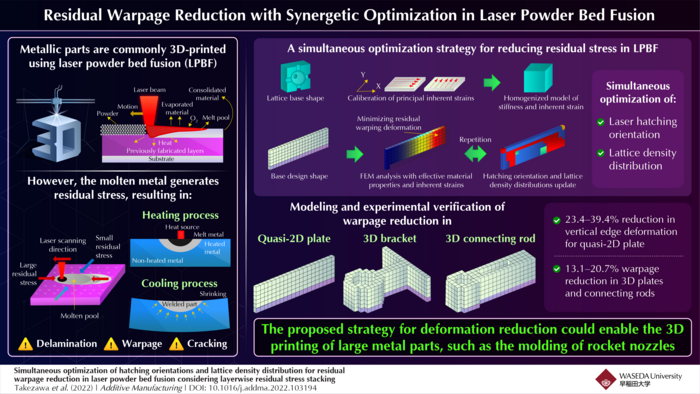 However, the molten metal generates a negative thermal stress following solidification, which produces an in-plane residual stress. This residual stress accumulates toward the upper layer with the repetitive formation process on each layer and often leads to undesirable effects like delamination, cracking, and warpage. Moreover, residual warpage and deformation are asymmetric in nature and scale with the size of the fabricated metal part. As a result, the integrated molding of large metal parts, such as rocket nozzles, is extremely challenging.

To tackle this issue, a team of researchers from Japan and the USA, led by Professor Akihiro Takezawa from Waseda University, have now proposed an optimized design strategy for AM. “LPBF metal 3D printing, which has been the focus of much attention in recent years, suffers from large warping of molded parts. In this study, we developed a method to reduce residual deformation by simultaneously optimizing the internal structure of the fabricated part and the laser scanning direction,” explains Takezawa.

In their study made available online on Oct 13, 2022 and published in Volume 60, Part A of Additive Manufacturing, the team, including Dr. Qian Chen and Professor Albert C. To from University of Pittsburgh, USA, studied the reduction of residual warpage while focusing on layer-wise residual stacking and utilized the lattice infill distribution technique. They employed a numerical methodology called “recurrent formula inherent strain method” to analyze the residual deformation. In this, they modeled the lattice based on the effective stiffness and anisotropic inherent strain using a gradient-based optimization algorithm.

In LPBF AM, the team simultaneously optimized two aspects of the fabrication process: the laser “hatching orientation” or scanning direction that utilizes the asymmetry of residual stress, and the internal structure of the fabricated material or the “lattice density distribution” by considering layer-wise residual stress stacking. Accordingly, they fine-tuned their methodology to ensure the synergetic influence of simultaneous optimization.

In addition, the team performed experiments to verify their novel methodology using quasi-2D plates, 3D brackets, and 3D connecting rods. Compared to the standard benchmark designs in use, their design strategy reduced vertical edge deformations by 23–39% in quasi-2D plates. In the cases of 3D brackets and connecting rods, the warpage reductions ranged between 13–20%.

Overall, the methodology proposed in this study could herald a remarkable development in 3D printing using LPBF fabrication. Reduction in residual warping and deformation is critical to molding large metal components. “Recent improvements in metal 3D printing technology have made it possible to produce larger molded parts. In this light, our methodology should ideally enable 3D printing of any large metal part,” concludes an optimistic Takezawa.

bDepartment of Mechanical Engineering and Materials Science, University of Pittsburgh

About Waseda University
Located in the heart of Tokyo, Waseda University is a leading private research university that has long been dedicated to academic excellence, innovative research, and civic engagement at both the local and global levels since 1882. The University has produced many changemakers in its history, including nine prime ministers and many leaders in business, science and technology, literature, sports, and film. Waseda University has strong collaborations with overseas research institutions and is committed to advancing cutting-edge research and developing leaders who can contribute to the resolution of complex, global social issues. The University has set a target of achieving a zero-carbon campus by 2032, in line with the Sustainable Development Goals (SDGs) adopted by the United Nations in 2015.

About Professor Akihiro Takezawa from Waseda University
Dr. Akihiro Takezawa earned his Bachelor of Engineering and Master’s degree in Precision Engineering from Kyoto University, Japan in 2003 and 2005, respectively. He also received his PhD in Precision Engineering from Kyoto University in 2009. He worked for Hiroshima University from 2007 to 2020. He is currently a Professor in the School of Fundamental Science and Engineering at Waseda University, Japan. His research interests include design for additive manufacturing (DfAM), topology optimization, and development of dynamic smart structure.

The authors declare no conflicts of interest