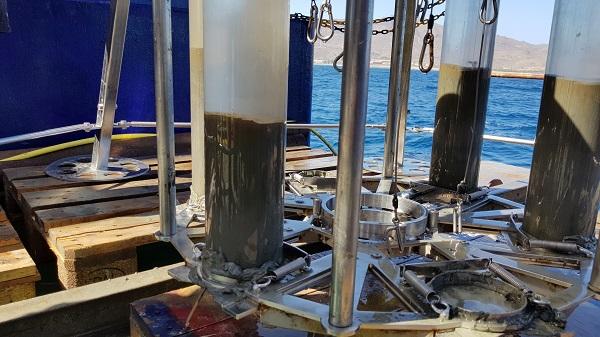 The light of ALBA Synchrotron will enable revealing the environmental impact of the tons of mining waste thrown for over forty years in the Portman bay (Murcia, Spain), as part of the research project by the Consolidated Research Group in Marine Geosciences of the Faculty of Earth Sciences of the University of Barcelona, which will apply new technologies to study one of the most severe pollution episodes from mining in Europe.

This is the first time researchers treat an episode of environmental pollution from mining, with technologies that will reveal little-known data on this Portman, a bay pending environmental rehabilitation to palliate the effects of the mining industry in the coasts of Murcia.

Portman: from the Roman Portus Magnus to the environmental disaster

The natural landscape of Portman bay -the prosperous Portus Magnus during the Roman Empire- is the paradigm of the degraded territory due mining exploitation. During these years of intensive activity, the company Peñarroya -franchised in Sierra Minera de La Unión- dumped more than sixty tons of mining waste rich in metals, sulphates and other toxics to the sea.

These mining-derived materials blocked the bay -blocking the arrival of ships to the coast- and moved the seafront six hundred meters. Three decades after the end of mining exploitation, the environmental impact of waste altered the geography of the bay, and the seafloor of the Murcian coast is still piling up tons of materials from mining.

This polluted part of the coast in the Peninsular littoral is another scientific target to study the impact of mine waste being dumped in the sea. “The bay of Portman is an exceptional study case on which we have more questions, despite having progressed a lot regarding the knowledge of its stability, structure and composition, which are crucial aspects to plan remediation tasks and rehabilitation of the bay”, says Miquel Canals, professor from the Department of Earth and Ocean Dynamics and head of the Consolidated Research Group in Marine Geosciences of the UB.

Since 2014, Miquel Canals has led the project NUREIEVA, an initiative to apply advanced technologies to the study of extreme submarine environments in mine waste dumps in Portman. In oceanographic campaigns in the ship Ángeles Alvariño -from the Spanish Oceanographic Institute (IEO)- the experts of the UB analyse the footprint of mine spills in marine sediments, which reach twelve kilometres offshore. According to Marc Cerdà, PhD student and member of the Research Group in Marine Geosciences, “so far, many scientific studies were focused on the surface. In the project, we took material through perforation of marine floors with four-meter tubes, and that is how we obtained samples of sediment cores that are later analysed in the laboratory”.

CORELAB: what does evidence of marine sediments reveal?

In the Laboratory for the non-destructive analysis of geological materials (CORELAB) of the UB, researchers could confirm the sediments had arsenic from minerals -arsenopyrite- from the mines in Murcia. In this context, knowing geochemical processes that affected waste in Portman -oxidations, etc.- is a determining factor to assess its potential impact on marine ecosystems.

According to Josep Roqué, lecturer from the Department of Mineralogy, Petrology and Applied Geology of the UB, “we did not know a lot about these processes. Therefore, it is important to characterize the mining waste in the proper way to rebuild geochemical processes that alter minerals with arsenic, and then, defining the availability of this toxic element in the marine ecosystem”.

Under the light of the synchrotron

The study of sediments under the light of the ALBA synchrotron can reveal data which are still unknown on the pollution of heavy metals such as arsenic. In the line of CLAESS light -an X-ray spectroscopy technique- the marine sediments will be studied under similar conditions to the ones in the Murcia bay.

According to Carlo Marini, ALBA synchrotron expert, “if we want to know the state of oxidation of the elements in situ, we cannot alter them during the analysis. The CLAESS light allows us taking measures in controlled conditions, without exposing samples to the atmosphere to avoid risk of oxidation. Also, the technique allows us to detect different chemical elements in the samples even if the concentration is low”.

This line of study will be important to know the distribution and bioavailability of arsenic and other metals in the marine ecosystem and therefore, to assess their potential effects on the environment and biodiversity in the littoral coast in Murcia.

Other participating researchers in the project are Anna Sànchez Vidal, Jaime Frigola, David Amblàs, Marc Cerdà, Andrea Baza and Marta Tarrés, from the Research Group in Marine Geosciences (UB); Joan Carles Melgarejo, from the Department of Mineralogy, Petrology and Applied Geology of the UB, and Marc Campeny, curator of the Museu de Ciències Naturals de Barcelona (museum of natural sciences).

The Lypla1 gene impacts obesity in a sex-specific manner