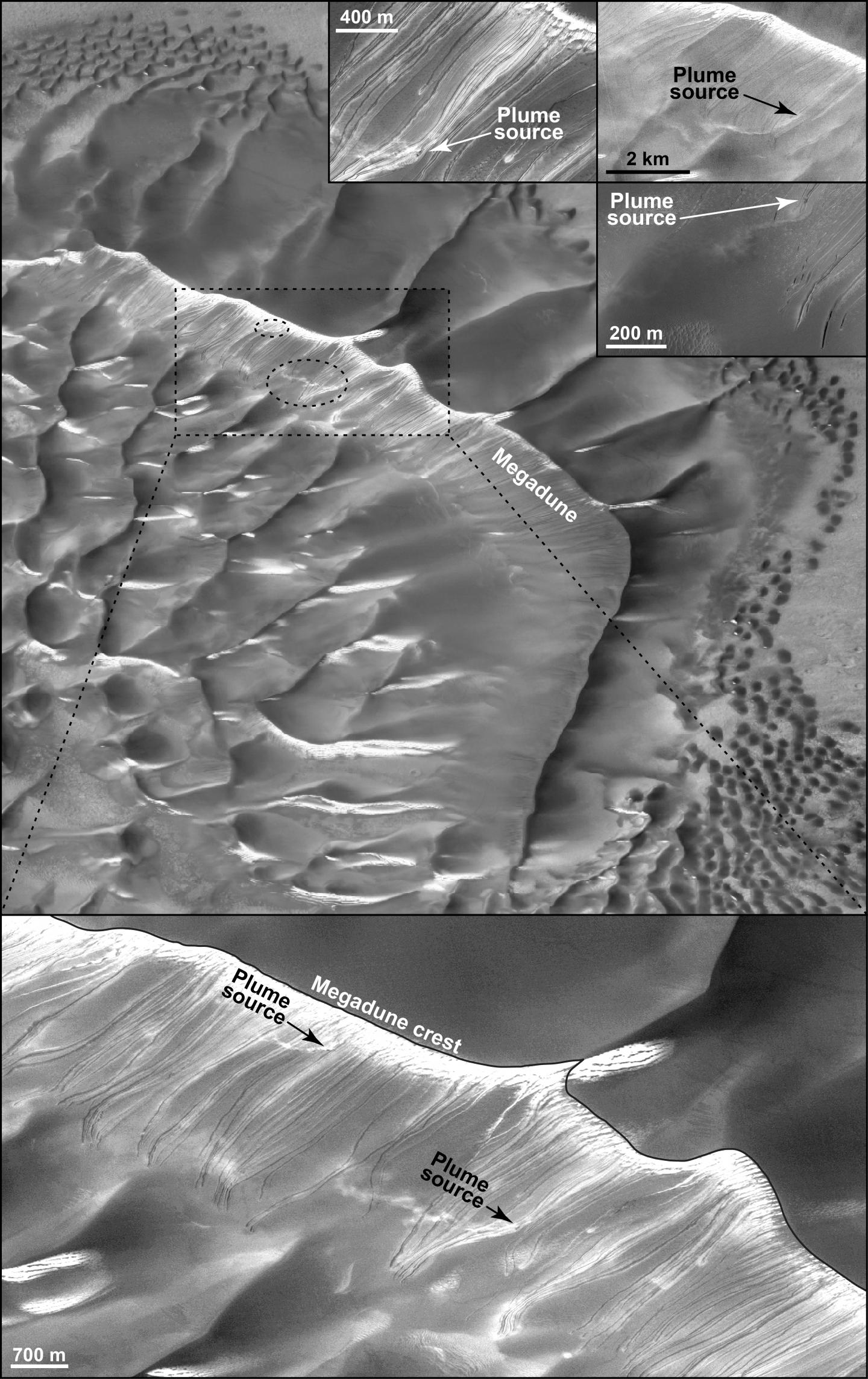 SAN ANTONIO — Feb. 24, 2021 — A Southwest Research Institute® (SwRI®) scientist examined 11 Mars years of image data to understand the seasonal processes that create linear gullies on the slopes of the megadune in the Russell crater on Mars. In early spring images, captured by two different cameras on the Mars Reconnaissance Orbiter, SwRI’s Dr. Cynthia Dinwiddie noticed airborne plumes of dusty material associated with the linear dune gullies on the sand dune’s downwind slope. These clues point to active processes involving chunks of frozen CO2, or dry ice, sliding down the sand dune, kicking up sand and dust along the way.

Russell crater, on Mars, is home to the largest known sand dune in the solar system, providing a frequently imaged locale to study modern surface activity on the Red Planet.

“For two decades, planetary scientists have had many ideas about how and when very long, narrow gullies formed on frost-affected sand dunes on Mars,” said Dinwiddie, first author of a paper outlining new research that has been accepted for publication in the journal Geophysical Research Letters. “Initially, scientists thought linear dune gullies were remnants of an ancient time when the climate on Mars supported liquid water on its surface. Then, repeat imaging showed that changes were happening now, when Mars is cold and arid. Several hypotheses have since been proposed, usually involving either CO2 ice or water ice.”

Other scientists found imagery showing bright CO2 ice blocks at rest in dune gullies, suggesting a causal relationship between the blocks and the gullies.

“In this paper, we offer compelling new evidence that venting CO2 gas dislodges CO2 ice blocks that carve and modify linear dune gullies,” Dinwiddie said.
“While trace amounts of seasonally condensed water are present, it behaves like an innocent bystander, not actively participating in the processes,” said coinvestigator Dr. Tim Titus of the U.S. Geological Survey.

During the bleak Martian fall and winter, cold temperatures condense part of the CO2 atmosphere onto the dune field’s surface, creating ice deposits. Previous research has shown that in the winter and early spring, the translucent slab of CO2 ice allows radiation from the Sun to heat the dark sand under the ice, causing some ice to transition to gas (or sublimate) and become pressurized in the contact zone. This pressurized CO2 gas escapes to the atmosphere via weak zones in the ice, also expelling sand and dust in a jet of gas.

The ejected material falls back to the surface and forms dark spots around the vent. This research proposes that as the season wears on, repetitive venting breaks up the slab ice into discrete blocks on steep slopes near the crest of the dune. Venting gas eventually dislodges the blocks, and sends them sliding downslope, deepening and modifying existing gullies or carving new ones.

The airborne plumes consist of fine dust disturbed by the sliding block, whereas coarse dust is redeposited near the gullies, creating a seasonal, relatively bright fringe around active gullies. The off-gassing ice blocks temporarily clean dust from the dark gully sand, resulting in telltale brightness (albedo) variations in and around gullies.

“We observe this bright fringe pattern around active gullies for a short period of time, say, the equivalent of the last three weeks of October, which is early to mid-spring in the Earth’s southern hemisphere,” Dinwiddie said. “Shortly after this ‘spring break,’ Mars’ dusty atmosphere blankets the area with a more homogenous façade, disturbed only by dust devils in the late spring and summer.”

SwRI led this program, with thermal modeling of ice and dust provided by Titus and the U.S. Geological Survey. A NASA Mars Data Analysis Program grant funded this 12-month pilot study of seasonal dune processes in Russell crater. Dinwiddie and Titus have proposed to extend this research to other craters in the southern hemisphere of Mars, where craters provide low-lying traps for sand to accumulate and form frost-affected dune fields.

The new paper “Airborne Dust Plumes Lofted by Dislodged Ice Blocks at Russell Crater, Mars” can be found at the Geophysical Research Letters.