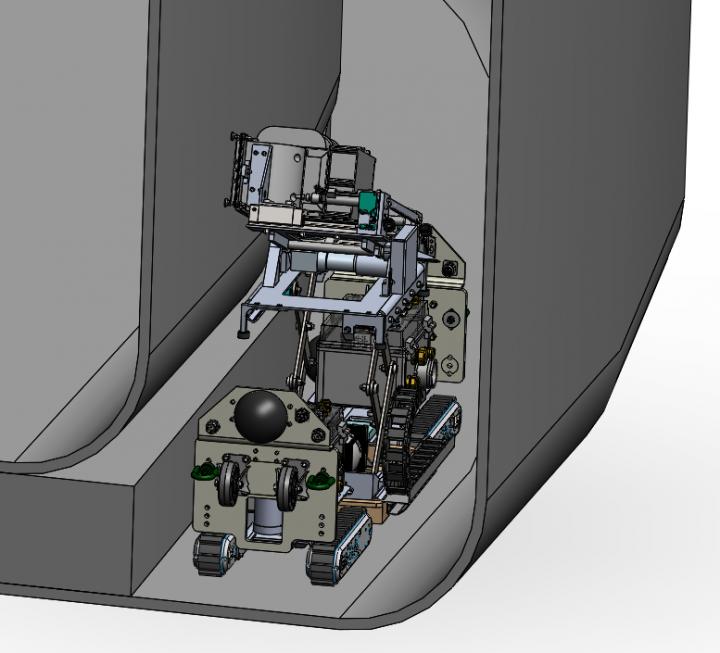 SAN ANTONIO — June 23, 2020 — Southwest Research Institute has been awarded a $1.3 million project from Washington River Protection Solutions (WRPS), a contractor to the U.S. Department of Energy (DOE), to build a robotic inspection system designed specifically to inspect the bottoms of massive underground double-shell tanks located at the Hanford Site. Both single-shell and double-shell tanks are used on the site to store 56 million gallons of chemical and radioactive waste.

A key process in the tank operations mission is to remove radioactive and chemical waste from 132 of 149 single-shell tanks that still hold waste and transfer the waste to double-shell tanks. The double-shell tanks are essential for continued safe storage until the waste can be treated for disposal. Each million-gallon, double-shell tank holds waste in a primary vessel that is encased in a secondary vessel to further protect the surrounding environment and needs to be inspected regularly.

For this reason, WRPS tapped SwRI to create a robotic ultrasonic inspection system that can identify flaws in the carbon-steel tanks while operating in the 30-inch-wide space between the primary and secondary vessels. The design phase of the project was completed in 2019.

“Our robotic inspection system uses SwRI-developed guided wave inspection technol-ogy to nondestructively find defects or thinning in the metal so mitigation steps can be taken,” Cobb said. “Guided wave technology operates at very low frequencies. The sound waves travel down the primary wall into the vessel bottom; the inspection sys-tem listens for the sound waves to reflect from any damage like cracks or corrosion.”

The robot housing the system will be several feet long but narrow, allowing it to be lowered into the space between the primary and secondary tanks and then expand to perform the inspection. Cobb and his Mechanical Engineering Division colleagues are leading the project, creating the sensors and the inspection system while collaborating with robotics experts in SwRI’s Intelligent Systems Division to develop the robot.

Construction of the robotic system will begin in a few weeks, with delivery planned for the end of calendar year 2020.