SAN ANTONIO — Jan. 25, 2023 — NASA’s Lucy spacecraft will add another asteroid encounter to its 4-billion-mile journey. On Nov. 1, 2023, the Southwest Research Institute-led Lucy mission will get a close-up view of a small main belt asteroid to conduct an engineering test of the spacecraft’s innovative asteroid-tracking navigation system. 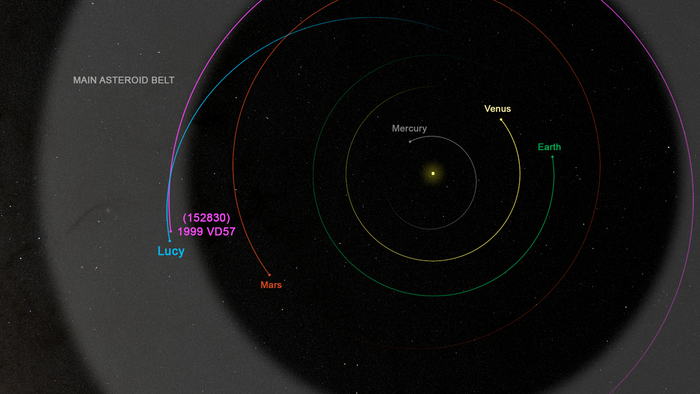 SAN ANTONIO — Jan. 25, 2023 — NASA’s Lucy spacecraft will add another asteroid encounter to its 4-billion-mile journey. On Nov. 1, 2023, the Southwest Research Institute-led Lucy mission will get a close-up view of a small main belt asteroid to conduct an engineering test of the spacecraft’s innovative asteroid-tracking navigation system.

The Lucy mission was already on course to break records by its planned visit of nine asteroids during its 12-year mission to tour the Jupiter Trojan asteroids, which orbit the Sun at the same distance as Jupiter. Originally, Lucy was not expected to get a close-up view of any asteroids until 2025, when it will fly by the main belt asteroid (52246) Donaldjohanson. However, the SwRI-led Lucy team identified a small, as-yet unnamed asteroid in the inner main belt as a potential new and useful target for the Lucy spacecraft.

“There are millions of asteroids in the main asteroid belt,” said Dr. Raphael Marschall, Lucy collaborator of the Nice Observatory in France, who identified asteroid (152830) 1999 VD57 as an object of special interest for Lucy. “I selected 500,000 asteroids with well-defined orbits to see if Lucy might be traveling close enough to get a good look at any of them, even from a distance. This asteroid really stood out. Without any modifications, Lucy’s trajectory would take it within 40,000 miles of the asteroid, at least three times closer than the next-closest asteroid.”

The Lucy team realized that, with a small maneuver, the spacecraft could get a close look at this asteroid. On January 24, 2023, the team officially added the asteroid flyby to Lucy’s tour as an engineering test of the spacecraft’s pioneering terminal tracking system. The new system solves a long-standing problem for flyby missions: During a spacecraft’s approach to a target, it is quite difficult to determine exactly how far the spacecraft is from the asteroid and exactly which way to point the cameras.

“In the past, most flyby missions have accounted for this uncertainty by taking a lot of images of the region where the asteroid might be, which is inefficient and produces lots of images of blank space,” says Lucy Principal Investigator Dr. Hal Levison, of SwRI’s Solar System Science and Exploration Division in Boulder, Colorado. The SwRI headquarters is in San Antonio. “Lucy will be the first flyby mission to employ an innovative and complex system to automatically track the asteroid during the encounter. The novel terminal tracking system will allow the spacecraft to take many more images of the target.”

Asteroid 1999 VD57 provides an excellent opportunity to validate this never-before-flown procedure. The geometry of this encounter — particularly the angle that the spacecraft approaches the asteroid relative to the Earth and Sun — is very similar to the planned Trojan asteroid encounters. This flyby allows the team to carry out a dress rehearsal under similar conditions well in advance of the spacecraft’s main scientific objectives, the flybys of the never-before-explored Trojan asteroids.

This asteroid was not identified as a target earlier because it is extremely small. In fact, 1999 VD57 will be the smallest main belt asteroid ever visited by a spacecraft, estimated to be a mere 0.4 miles (700 m) in size. It is more similar in size to the near-Earth asteroids visited by recent space missions, including OSIRIS-REx and DART, than to previously visited main belt asteroids.

The Lucy team will carry out a series of maneuvers starting in early May 2023 to place the spacecraft on a trajectory that will pass approximately 280 miles (450 km) from this small asteroid.