A chemist at the University of Cincinnati has come up with a novel way to study the thermodynamic properties of molten salts, which are used in many nuclear and solar energy applications. 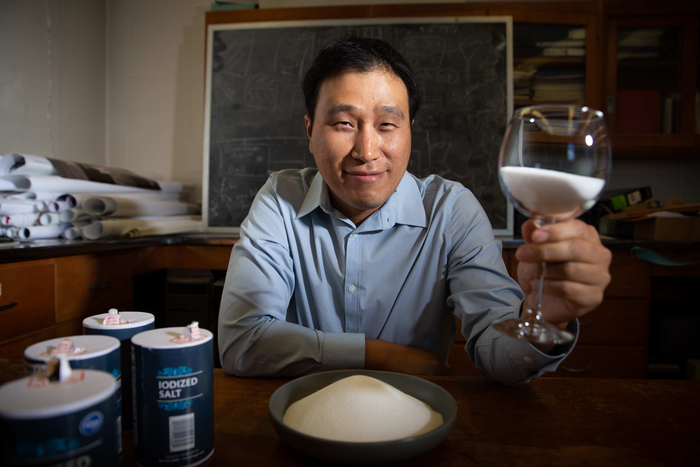 A chemist at the University of Cincinnati has come up with a novel way to study the thermodynamic properties of molten salts, which are used in many nuclear and solar energy applications.

Molten salt is salt heated to high temperatures where it becomes liquid. UC researchers studied sodium chloride, commonly known as table salt. Shi said molten salt has properties that make it a valuable medium for cooling systems in nuclear power plants. In solar towers, they can be used to transfer heat or store energy.

Paradoxically, while salt is an insulator, molten salt conducts electricity.

“Molten salts are stable at high temperatures and can hold a lot of energy in a liquid state,” Shi said. “They have good thermodynamic properties. That makes them a good energy storage material for concentrated solar power plants. And they can be used as a coolant in nuclear reactors.”

Published in the Royal Society of Chemistry journal Chemical Science, the study could help researchers examine the corrosion that these salts can cause in metal containers like those found in the next generation of nuclear reactors.

The study provides a reliable approach to study the conversion of dissolved gas to vapor in molten salts, helping engineers understand the effect of different impurities and solutes (the substance dissolved in a solution) on corrosion. Shi said it also will help researchers study the release of potentially toxic gas into the atmosphere, which will be extremely useful for fourth-generation molten salt nuclear reactors.

“We used our quasi-chemical theory and our deep neural network, which we trained using data generated by quantum simulations, to model the solvation thermodynamics of molten salt with chemical accuracy,” Shi said.

Study co-author Thomas Beck is former head of UC’s Department of Chemistry and now works as section head of science engagement for the Oak Ridge National Laboratory in Tennessee. Beck said molten salts do not expand when heated, unlike water which can create extreme pressure at high temperatures.

“The pressure inside a nuclear reactor goes up a lot. That’s the difficulty of reactor design — it leads to more risks and higher costs,” he said.

“At Oak Ridge, we have the world’s fastest supercomputer, so our experiment would take less time here,” Beck said. “But on typical supercomputers, it can take weeks or months to run these quantum simulations.”

The research team also included Stephen Lam at the University of Massachusetts Lowell.

“It’s important to have accurate models of these salts. We were the first group to calculate free energy of sodium chloride at high temperature in liquid and compare it to previous experiments,” Beck said. “So we proved it’s a useful technique.”

In 2020, Shi and Beck established a free-energy scale for single-ion hydration using quasi-chemical theory and quantum mechanical simulations of the sodium ion in water in a study published in the journal PNAS. It was the first solvation free-energy calculation for the charged solute using quantum mechanics, Shi said.

Beck said molten salts will be important for developing new sources of energy — even perhaps one day fusion energy.

“They’re proposing using molten salts as a coating coolant for the high-temperature reactor,” he said. “But fusion is farther down the road.”

The study was funded with grants from the National Science Foundation and the UC College of Arts and Sciences and research support from the U.S. Department of Energy’s Office of Nuclear Energy with computational help from the Oak Ridge Leadership Computing Facility.