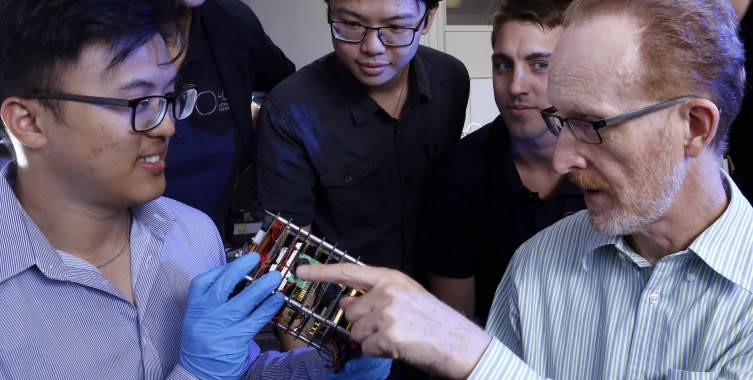 A flotilla of 50 small satellites – known as cubesats and weighing an average of two kilos each – will be launched from the International Space Station in the European-led as QB50 mission to explore the little-understood region above Earth known as the thermosphere.

The QB50 cubesats have been built by 48 universities and research institutes from 28 nations, including Canada, China, France, Italy, Korea, UK, USA and Australia (see the full list here). It is led by Belgium’s Von Karman Institute for Fluid Dynamics, and includes three Australian satellites, two of them built at the University of New South Wales in Sydney.

They will focus on the lower thermosphere, between 200 and 380 km above Earth, a region vital for communications, weather formation and helps shield Earth from cosmic rays and solar radiation.

“This region is poorly understood and hard to measure,” said Andrew Dempster, Director of Australian Centre for Space Engineering Research (ACSER) at UNSW. “And yet, it’s the interface between our planet and space. It’s where much of the ultraviolet and X-ray radiation from the Sun collides with the Earth, and generates auroras and potential hazards that can affect power grids and communications.”

All three satellites, along with 37 other QB50 cubesats, will be launched to the International Space Station in December by an Orbital ATK Antares rocket from Wallops Island, Virginia, inside a Cygnus cargo freighter. The cubesats will be deployed from the ISS between a month or so after arrival, and drift down from the ISS’s orbit of 380 km toward the target region.

“This is the most extensive exploration of the lower thermosphere ever, collecting measurements in the kind of detail never before tried,” said Elias Aboutanios, project leader of UNSW-Ec0 and a senior lecturer at UNSW. “The satellites will operate for 3-9 months – and may last up to a year – orbiting this little-studied region of space, before their orbits decay and they re-enter the atmosphere and burn up.”

Each cubesat also carries other instruments with its own engineering and scientific goals. UNSW-Ec0, for example, has three other experiments: a robust computer chip designed to avoid crashing in the harsh radiation of space, as some satellites and space probes are forced to do when hit by cosmic rays; a space-borne GPS to allow satellites to cluster together in swarms; and test a super-reliable computer microkernel in the harsh radiation of space.

In addition, UNSW-Ec0’s chassis is made entirely from 3D-printed thermoplastic, itself an experiment to test the reliability of using 3D-printing to manufacture satellites, making them cheaper.

UNSW’s Faculty of Engineering is the powerhouse of engineering research in Australia, comprising nine schools, 21 research centres and participating in or leading 10 Cooperative Research Centres.