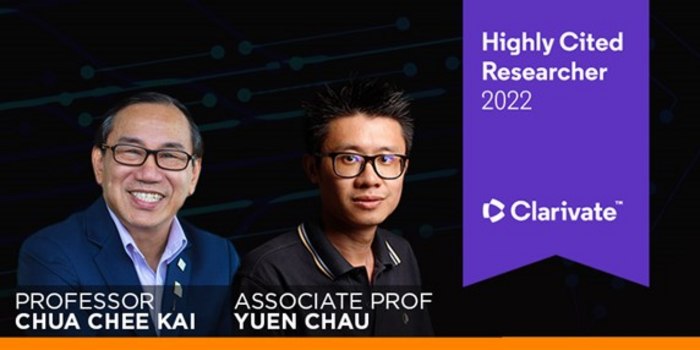 According to Clarivate Plc, Highly Cited Researchers™ are 1 in 1,000 of the world’s population of scientists and social scientists. Researchers on this prestigious list have demonstrated significant and broad influence reflected in their publication of multiple highly cited papers, which rank in the top 1% for a field or fields in the Web of Science™.

The 2022 list includes 6,938 researchers from 69 countries or regions, and across a diverse range of research fields. Of these, 106 researchers are from Singapore.

Prof Chua is a leading expert in 3D printing, rapid prototyping and additive manufacturing research. He was awarded the prestigious International Freeform and Additive Manufacturing Excellence (FAME) Award in 2018. Most recently, he was the Chair of the inaugural International Conference of Additive Manufacturing for a Better World 2022 at SUTD and published a textbook titled ‘Digital Gastronomy – From 3D Food Printing to Personalised Nutrition’ with World Scientific.

Both Prof Chua and Assoc Prof Yuen are also within the top 2% of scientists globally according to a database by Stanford University and Elsevier BV. A total of 29% of SUTD faculty were among the list of top 2% scientists.

Previously, Professor Tony Quek, SUTD’s Head of Pillar for Information Systems Technology and Design, topped the Highly Cited Researchers list in the field of Computer Science for five consecutive years from 2016 to 2020.

“Being a young university of 13 years has not stopped SUTD from producing three of the world’s highly cited researchers by adding two to the tally this year. This is the 6th time that SUTD has been placed on this annual list. As a research intensive university, this is indeed a strong testament to SUTD’s commitment in driving innovations which address the challenges of society to better the world,” said Prof Chua, who is also the Associate Provost for Research at SUTD.

“I am honoured that our future forward research in wireless communications is attracting the attention of the scientific community. This recognition will undoubtedly spur us on further in our quest towards more energy efficient wireless networks with higher throughput,” added Prof Yuen.