About 42,000 women die of breast cancer each year, and while strides are being made in medical treatments, the best tool for preventing cancer deaths continues to be screening and early detection. But a new national survey commissioned by Orlando Health finds far too many women are skipping lifesaving mammograms and many young women have no plans to get screened at all. 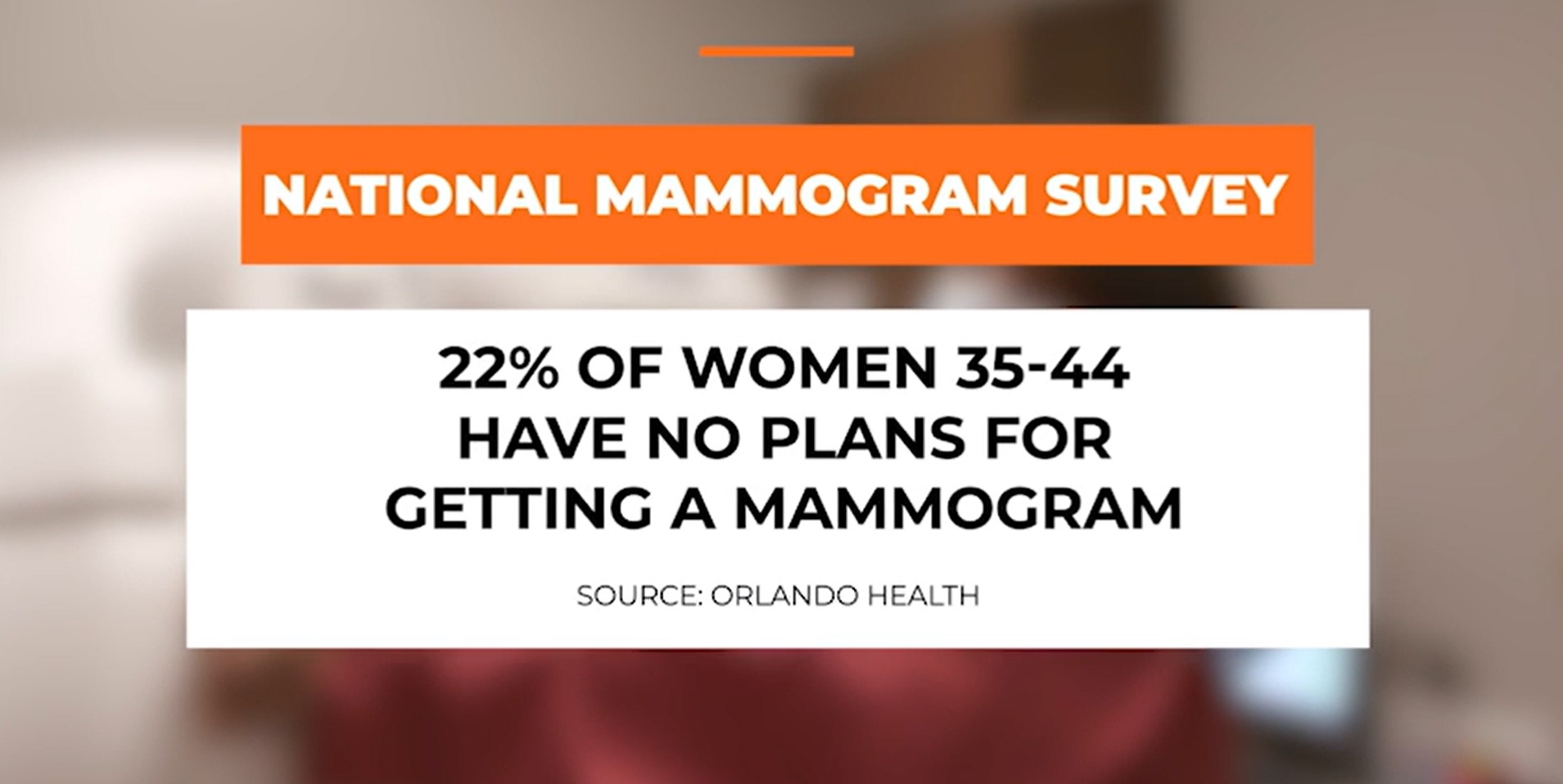 About 42,000 women die of breast cancer each year, and while strides are being made in medical treatments, the best tool for preventing cancer deaths continues to be screening and early detection. But a new national survey commissioned by Orlando Health finds far too many women are skipping lifesaving mammograms and many young women have no plans to get screened at all.

Recently updated guidelines by the National Comprehensive Cancer Network state that women of average risk should begin annual mammograms at age 40, and earlier for those with risk factors like a family history, prior biopsies, atypical cells and dense breast tissue. Yet the survey found 22 percent of  U.S. women ages 35 to 44 have never gotten a mammogram and have no plans of getting one.

“Mammograms can pick up tumors that are extremely small and result in a diagnosis at a stage zero or one, versus waiting for a patient to feel a lump and then by then it’s probably a stage two or three,” said Nikita Shah, MD, medical oncology team leader for the Breast Care Center at the Orlando Health Cancer Institute. “That’s the difference between a lumpectomy and possibly a short course of radiation and more extensive treatments that involve chemotherapy, radiation and surgeries. Survival also goes from nearly 100 percent at stage zero to 50 to 70 percent for those diagnosed at stage two or three.”

The survey found that less than half of U.S. women (43 percent) know their family history of breast cancer and only about a third (32 percent) know their individual risk factors for breast cancer. Knowing your risks and when to begin screenings is critical to early detection, something that is especially important for those who are disproportionately affected by the disease such as Black women, who are more likely to be diagnosed at a younger age and are 40 percent more likely to die of breast cancer than white women.

“African American women tend to have a more aggressive disease course, and we want everybody, regardless of their race, to be aware and get their recommended mammograms,” Shah said. “Breast cancer is one of the few cancers where the survival rate is very high when caught early, and we know that early detection is where we can really make a difference.”

Terlisa Sheppard was just 31 years old and eight months pregnant when she was diagnosed with breast cancer after noticing a lump under her arm that was growing as her pregnancy progressed.

“I am so glad that I made the decision at that point to go in because my life changed instantly. I know for sure that that mammogram saved my life and my baby’s life,” Sheppard said. “I had a healthy daughter six weeks early and immediately began treatment to try to save my life.”

Her two daughters are now 23 and 25 and have joined their mother to advocate for breast cancer risk awareness and the importance of early detection.

“You know your body better than anybody. If you notice something, have it checked out,” Sheppard said. “I’m a clear example that age doesn’t matter. After my diagnosis, I had to fight for my life and the opportunity to be there for my daughters. If I can help someone else avoid that hardship through early diagnosis, I’m going to do everything I can.”

Women should begin talking to their primary care physician or gynecologist in their twenties to assess their risks and determine when mammograms should start. Monthly self-breast exams are also important to help women understand what is normal for them, so they can recognize any changes and bring them to their doctor’s attention.