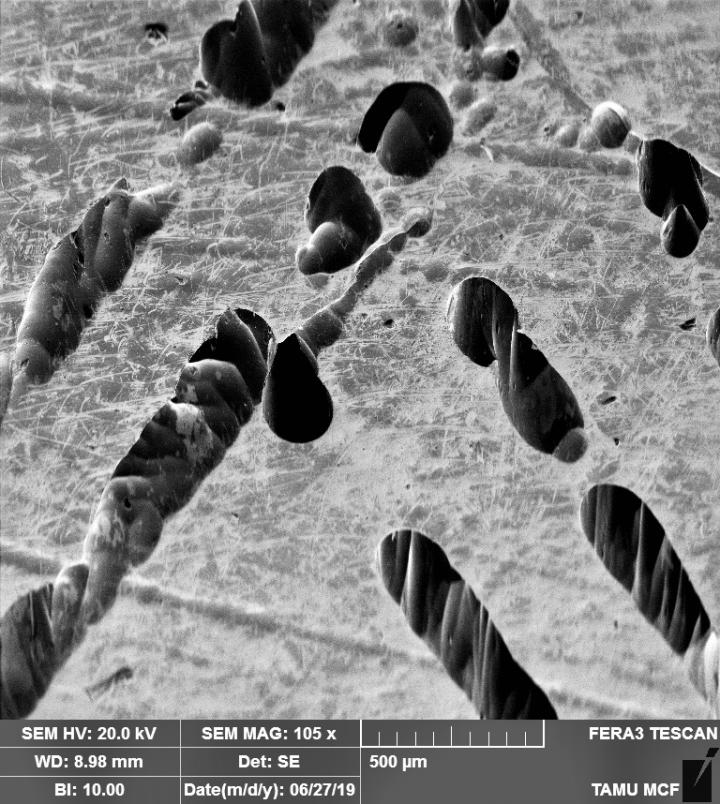 Nickel is one of the most abundant elements on earth. It is hard, yet malleable, magnetic at room temperature, and a relatively good conductor of electricity and heat. Most notably, nickel is highly corrosion resistant, which provides for a variety of uses by industry.

However, a surprising discovery by a team of researchers at Texas A&M University has found that nickel not only corrodes, but does so in a way that scientists least expected.

The team was led by Dr. Michael Demkowicz, associate professor and graduate director in the Department of Materials Science and Engineering, and director of the Center for Research Excellence on Dynamically Deformed Solids at Texas A&M University.

Their work was published in the American Physical Society’s Physical Review Materials journal in an article titled “Preferential Corrosion of Coherent Twin Boundaries in Pure Nickel Under Cathodic Charging.”

Like a finished jigsaw puzzle, materials are made of interlocking pieces. Microscopically, nickel is made of aggregates of small, tightly packed crystals or grains.

Corrosion preferentially attacks the joints, or “boundaries,” between these grains. This phenomenon, known as intergranular corrosion, is a localized type of decay that occurs at the microscopic level, targeting the breakdown of materials at the edges of each of these boundaries, rather than at the outer surface of the material. As such, it weakens the material from the inside-out.

Until now, scientists thought that one special type of boundary, known as a coherent twin boundary, was resistant to corrosion. Surprisingly, the team discovered that nearly all the corrosion in their experiments occurred precisely on these boundaries.

Coherent twin boundaries are areas in which the material’s internal structure pattern forms a mirror image of itself along a shared border. They occur when crystal formations on either side of an atom-wide border line up without disorder or disarray. These types of boundaries naturally occur during crystallization, but can also be the result of mechanical or thermal influence.

“Pure nickel is mostly corrosion resistant. But when we charged it at the cathodic (passive and lowest energy) side, which is even less likely to corrode, we did, surprisingly, see visible corrosion trenches on coherent twin boundaries,” said Mengying Liu, graduate student at the Department of Materials Science and Engineering at Texas A&M and first author on the paper. “This finding will help engineers predict where corrosion is most likely to begin. It may even lead to the production of metals that corrode less.”

The team’s research not only provides engineers with vital insight into materials often utilized in situations that require corrosion resistance, but also offers a new perspective regarding intergranular corrosion along coherent twin boundaries.

For years, researchers have operated on the assumption that coherent twin boundaries resist corrosion. They have even worked to create metals that have more of these boundaries in an effort to reduce corrosion.

“This finding takes decades of assumptions on metal corrosion and flips them on their head,” said Demkowicz. “In an effort to reduce corrosion, people have been making metals that contain as many coherent twin boundaries as possible. Now that entire strategy will have to be reconsidered.”

Demkowicz believes the scientific insight provided by this study may be even more important than its technological applications. “It turns out the reasoning that previously led us to believe coherent twin boundaries are corrosion resistant is flawed,” he said. “This work provides clues on how to improve our fundamental understanding of metal corrosion.”

CNIO researchers discover a new way to protect against high-dose…