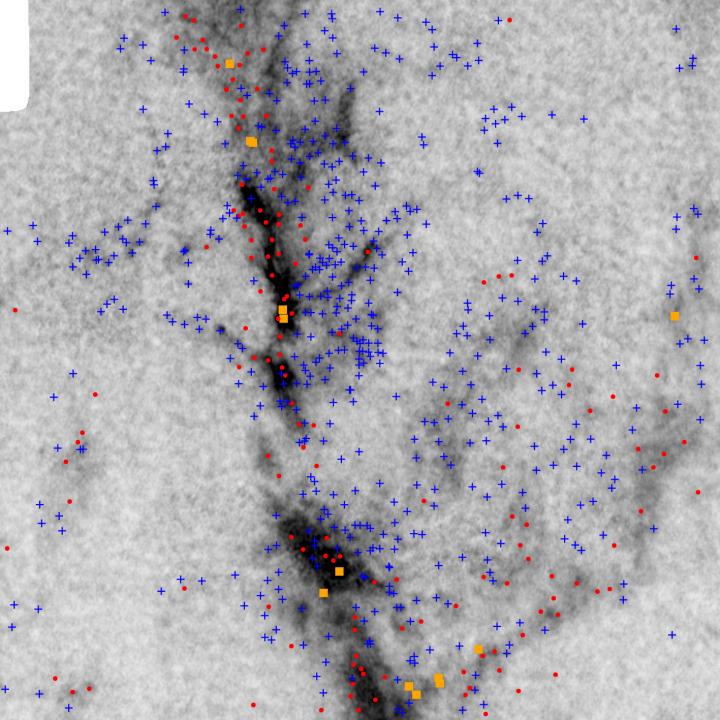 A survey of star formation activity in the Orion Nebula Cluster found similar mass distributions for newborn stars and dense gas cores, which may evolve into stars. Counterintuitively, this means that the amount of gas a core accretes as it develops, and not the initial mass of the core, is the key factor in deciding the final mass of the produced star.

The Universe is populated with stars of various masses. Dense cores in clouds of interstellar gas collapse under their own gravity to form stars, but what determines the final mass of the star remains an open question. There are two competing theories. In the core-collapse model, larger stars form from larger cores. In the competitive accretion model, all cores start out about the same mass but accrete different amounts of gas from the surroundings as they grow.

To distinguish between these two scenarios, a research team led by Hideaki Takemura at the National Astronomical Observatory of Japan created a map of the Orion Nebula Cluster where new stars are forming, based on data from the American CARMA interferometer and NAOJ’s own Nobeyama 45-m Radio Telescope. Thanks to the unprecedent high resolution of the map, the team was able to compare the masses of the newly formed stars and gravitationally collapsing dense cores. They found that the mass distributions are similar for the two populations. They also found many smaller cores which don’t have strong enough gravity to contract into stars.

One would think that similar mass distributions for prestellar cores and newborn stars would favor the core-collapse model, but actually because it is impossible for a core to impart all of its mass to a new star, this shows that continued gas inflow is an important factor, favoring the competitive accretion model.

Now the team will expand their map using additional data from CARMA and the Nobeyama 45-m Radio Telescope to see if the results from the Orion Nebula Cluster hold true for other regions.

These results appeared as Takemura et al. “The Core Mass Function in the Orion Nebula Cluster Region: What Determines the Final Stellar Masses?” in the Astrophysical Journal Letters on March 22, 2021.