In what they call surprise findings, Johns Hopkins Medicine scientists report that — unlike fruit flies — mosquitoes’ odor sensing nerve cells shut down when those cells are forced to produce odor-related proteins, or receptors, on the surface of the cell. This “expression” process apparently makes the bugs able to ignore common insect repellants. 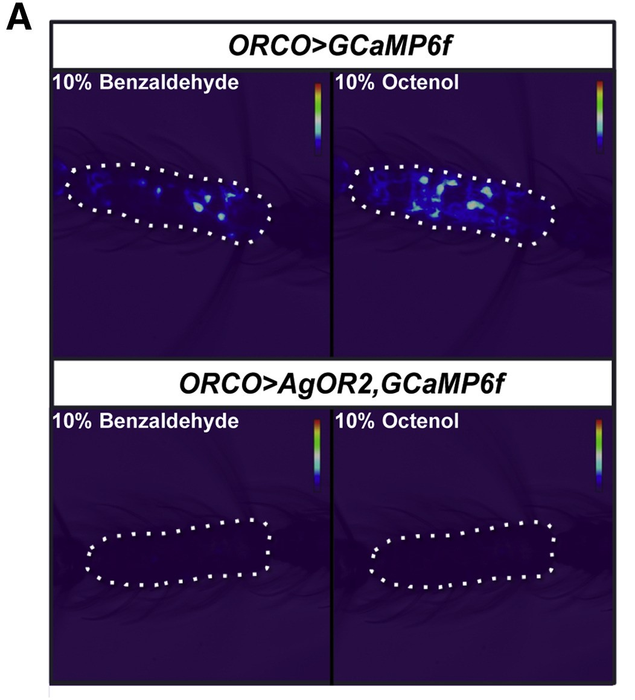 In what they call surprise findings, Johns Hopkins Medicine scientists report that — unlike fruit flies — mosquitoes’ odor sensing nerve cells shut down when those cells are forced to produce odor-related proteins, or receptors, on the surface of the cell. This “expression” process apparently makes the bugs able to ignore common insect repellants.

In contrast, when odor sensors in fruit flies are forced to express odor receptors, it prompts flight from some smelly situations.

The findings, published Mar. 8 in Cell Reports, reveal the variation in insect olfactory systems, say the researchers, and add to the growing body of research aimed at improving methods to repel mosquitoes from human skin.

Mosquito bites not only create irritating swelling and itching, but, worldwide, they play a role in spreading rampant and often lethal diseases such as malaria and dengue fever, as well as Zika virus infections.

“When experiments don’t go as predicted, there’s often something new to be discovered,” says Christopher Potter, Ph.D., associate professor of neuroscience at the Johns Hopkins University School of Medicine, describing the new study. It turns out, he says, that, “Mosquitoes are so much trickier than we thought.”

Potter and former postdoctoral fellow Sarah Maguire, Ph.D., designed their research project suspecting they’d find that mosquitoes have the same reaction as fruit flies when their new odor sensors are forced to be expressed.

Other research showed that when odor receptors in fly olfactory neurons are abnormally expressed, a new signal, based on the expressed odor receptor, is delivered to the brain, and the bugs move away from an offending odor.

The researchers then tested this same scenario on female Anopheles mosquitoes, whose bite transmits parasites that cause malaria in humans. The idea was that if researchers could push mosquito odor neurons into a similar expression state, triggered by odorants already on the skin, the mosquitoes would avoid the scent and fly off.

In the mosquito experiments, the researchers used mosquitoes genetically modified to overexpress an odor receptor called AgOR2, which responds to animal odorants found on humans.

By measuring the neuron activity generated by mosquitoes’ odor receptors, the scientists found that the mosquitoes with overexpressed AgOR2 receptors had very little response to common animal scents, benzaldehyde and indole, as well as chemical odorants in general.

“AgOR2 overexpression threw a wrench in the whole system by inactivating olfactory receptors in these mosquitoes,” says Potter.

Next, working with Johns Hopkins scientist Loyal Goff, Ph.D., the researchers did additional experiments to determine the level of messenger RNA output in olfactory neurons forced to express the AgOR2 gene, an indicator of the health of olfactory neurons.

They determined this by using a technique called RNA sequencing which measures the amount of RNA, an intermediary between DNA and its protein output, in neurons found in the antennae of normal and the genetically modified mosquitoes.

They found that mosquitoes genetically modified to overexpress AgOR2 had up to 95% less expression in their natural olfactory receptors as compared with unmodified mosquitoes.

The researchers suspect that the odor receptor shutdown may be a kind of failsafe in mosquitoes, ensuring that only one type of odorant receptor is expressed at a single time.

Since Anopheles mosquito olfactory systems continue to develop into adulthood, about eight days after hatching, the researchers speculate that the insects’ olfactory neurons might be susceptible to which olfactory receptors to express, based on their surrounding environment. This type of flexibility in a mosquito’s olfactory neurons may allow the mosquito to adapt to its odor environment. The researchers are conducting experiments to test this theory.

Potter hopes that the current findings may advance the search for methods that can trick the mosquito olfactory system into no longer preferring the smell of humans.

In addition to Potter, Maguire and Goff, Ali Afify contributed to this research.