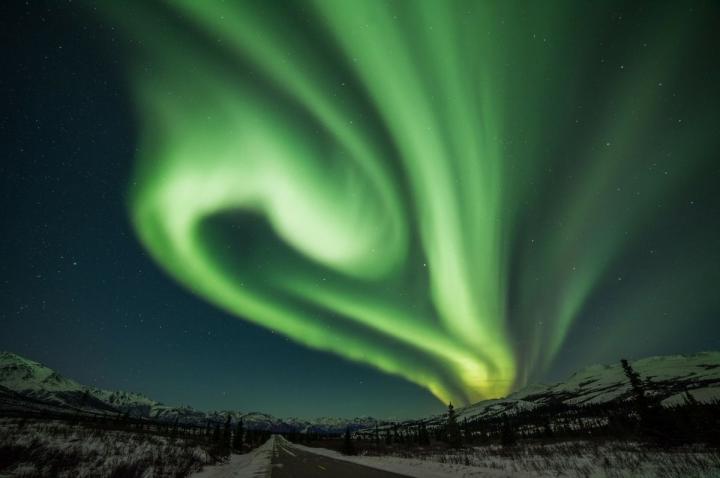 The spectacularly colorful aurora borealis — or northern lights — that fills the sky in high-latitude regions has fascinated people for thousands of years. Now, a team of scientists has resolved one of the final mysteries surrounding its origin.

Scientists know that electrons and other energized particles that emanate from the sun as part of the “solar wind” speed down Earth’s magnetic field lines and into the upper atmosphere, where they collide with oxygen and nitrogen molecules, kicking them into an excited state. These molecules then relax by emitting light, producing the beautiful green and red hues of the aurora.

What has not been well understood is precisely how groups of electrons accelerate through the magnetic field on the last leg of their journey, reaching speeds of up to 45 million mph. In a study published today in the journal Nature Communications, that question is answered by physicists from UCLA, Wheaton College, the University of Iowa and the Space Science Institute.

A popular theory has been that electrons hitch a ride on Alfvén waves — a type of electromagnetic wave that spacecraft have frequently identified traveling Earthward along magnetic field lines above auroras. While space-based research has provided strong support for the theory, limitations inherent to spacecraft measurements have prevented a definitive test.

After reproducing conditions that mimicked those in Earth’s auroral magnetosphere, the team used specially designed instruments to launch Alfvén waves down the plasma device’s 20-meter-long chamber. Because Alfvén waves are thought to collect only a small portion of electrons in the plasma of space, the physicists focused on determining whether there were electrons that appeared to be traveling at a rate comparable to the electric field of the waves.

“This challenging experiment required a measurement of the very small population of electrons moving down the chamber at nearly the same speed as the Alfvén waves, numbering less than one in a thousand of the electrons in the plasma,” said Troy Carter, a professor of physics and director of the UCLA Plasma Science and Technology Institute.

“Measurements revealed this small population of electrons undergoes ‘resonant acceleration’ by the Alfvén wave’s electric field, similar to a surfer catching a wave and being continually accelerated as the surfer moves along with the wave,” said Gregory Howes, an associate professor of physics at the University of Iowa.

Howes noted that these Alfvén waves appear following geomagnetic storms, space-based phenomena triggered by violent events on the sun, such as solar flares and coronal mass ejections. These storms can cause what is known as “magnetic reconnection” in the Earth’s magnetic field, in which magnetic field lines are stretched like rubber bands, snap and then reconnect. These shifts launch Alfvén waves along the lines toward Earth.

And because regions of magnetic reconnection shift during a storm, the Alfvén waves — and their accompanying surfing electrons — travel along different field lines over that time period, ultimately leading to the shimmering glow of the aurora’s curtains of light, Carter said.

In physics, electrons surfing on the electric field of a wave is a phenomenon known as Landau damping, in which the energy of the wave is transferred to the accelerated particles. As part of their research, the team used an innovative analysis technique that combined measurements of the Alfvén waves’ electric field and the electrons to generate a unique signature of the electron acceleration by Landau damping. Through numerical simulations and mathematical modeling, the researchers demonstrated that the signature of acceleration measured in the experiment agreed with the predicted signature for Landau damping.

The agreement of experiment, simulation and modeling provides the first direct test showing that Alfvén waves can produce accelerated electrons that cause the aurora, Carter said.

“This experimental confirmation of the physics behind the aurora is due to persistent ingenuity of research groups at the University of Iowa and UCLA,” said Vyacheslav (Slava) Lukin, program director for Plasma Physics at the National Science Foundation, who was not involved in the research. “From student support via an NSF Graduate Research Fellowship, to the NSF CAREER program for early career faculty, to the 25-year partnership between NSF and the Department of Energy that has enabled the unique capabilities of the Basic Plasma Science Facility, this is a success story of a discovery made possible by consistent support of the university research community.”

In addition to Howes and Carter, study authors included James Schroeder of Wheaton College, Craig Kletzing and Frederick Skiff of the University of Iowa, Stephen Vincena of UCLA, and Seth Dorfman of the Space Science Institute.

Further information on the research findings is available on Howes’ website.