Scientists developed a model showing that a fragile, temporary state of immunity emerged during the early epidemic but got destroyed as people changed their social behaviors over time, leading to future waves of infection 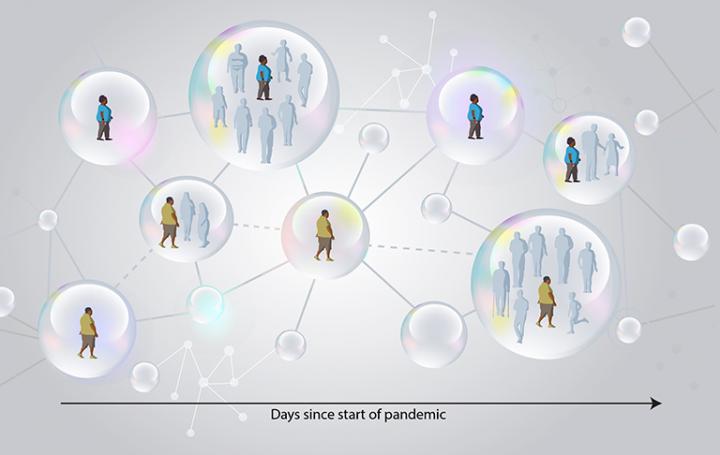 UPTON, NY–Scientists at the U.S. Department of Energy’s (DOE) Brookhaven National Laboratory and the University of Illinois Urbana-Champaign (UIUC) have developed a new mathematical model for predicting how COVID-19 spreads. This model not only accounts for individuals’ varying biological susceptibility to infection but also their levels of social activity, which naturally change over time. Using their model, the team showed that a temporary state of collective immunity–what they coined “transient collective immunity”–emerged during early, fast-paced stages of the epidemic. However, subsequent “waves,” or surges in the number of cases, continued to appear because of changing social behaviors. Their results are published in the Proceedings of the National Academy of Sciences.

The COVID-19 epidemic reached the United States in early 2020, rapidly spreading across several states by March. To mitigate disease spread, states issued stay-at-home orders, closed schools and businesses, and put in place mask mandates. In major cities like New York City (NYC) and Chicago, the first wave ended in June. In the winter, a second wave broke out in both cities. Understanding why initial waves end and subsequent waves begin is key to being able to predict future epidemic dynamics.

Here’s where modeling can help. But classical epidemiological models were developed almost 100 years ago. While these models are mathematically robust, they don’t perfectly capture reality. One of their flaws is failing to account for the structure of person-to-person contact networks, which serve as channels for the spread of infectious diseases.

“Classical epidemiological models tend to ignore the fact that a population is heterogenous, or different, on multiple levels, including physiologically and socially,” said Alexei Tkachenko, a physicist in the Theory and Computation Group at the Center for Functional Nanomaterials (CFN), a DOE Office of Science User Facility at Brookhaven Lab. “We don’t all have the same susceptibility to infection because of factors such as age, preexisting health conditions, and genetics. Similarly, we don’t have the same level of activity in our social lives. We differ in the number of close contacts we have and in how often we interact with them throughout different seasons. Population heterogeneity–these individual differences in biological and social susceptibility–is particularly important because it lowers the herd immunity threshold.”

Herd immunity is the percentage of the population who must achieve immunity in order for an epidemic to end.

“Herd immunity is a controversial topic,” said Sergei Maslov, a CFN user and professor and Bliss Faculty Scholar at UIUC, with faculty appointments in the Departments of Physics and Bioengineering and at the Carl R. Woese Institute for Genomic Biology. “Since early on in the COVID-19 pandemic, there have been suggestions of reaching herd immunity quickly, thereby ending local transmission of the virus. However, our study shows that apparent collective immunity reached in this way would not last.”

“What was missing prior to this work was that people’s social activity waxes and wanes, especially due to lockdowns or other mitigations,” added Nigel Goldenfeld, Swanlund Professor of Physics and director of the NASA Astrobiology Institute for Universal Biology at UIUC. “So, a wave of the epidemic can seem to die away due to mitigation measures when the susceptible or more social groups collectively have been infected–what we call transient collective immunity. But once these measures are relaxed and people’s social networks are renewed, another wave can start, as we’ve seen with states and countries opening up too soon, thinking the worst was behind them.”

“Mitigation measures, such as mask wearing and avoiding large gatherings, should continue until the true herd immunity threshold is achieved through vaccination,” said Elbanna. “We can’t outsmart this virus by forcing our way to herd immunity through widespread infection because the number of infected people and number hospitalized who may die would be too high.”

The nuts and bolts of predictive modelling

Over the past year, the Brookhaven-UIUC team has been carrying out various projects related to a broader COVID-19 modeling effort. Previously, they modeled how the epidemic would spread through Illinois and the UIUC campus, and how mitigation efforts would impact that spread. Last May, they began this project to calculate the effect of population heterogeneity on the spread of COVID-19.

“Basic epidemiological models only have one characteristic time, called the generation interval or incubation period,” said Tkachenko. “It refers to the time when you can infect another person after becoming infected yourself. For COVID-19, it’s roughly five days. But that’s only one timescale. There are other timescales over which people change their social behavior.”

In this work, the team incorporated time variations in individual social activity into existing epidemiological models. While a complicated, multidimensional model is needed to describe each group of people with different susceptibilities to disease, they compressed this model into only three equations, developing a single parameter to capture biological and social sources of heterogeneity.

“We call this parameter the immunity factor, which tells you how much the reproduction number drops as susceptible individuals are removed from the population,” explained Maslov.

The reproduction number indicates how transmissible an infectious disease is. Specifically, the quantity refers to how many people one infected person will in turn infect. To estimate the social contribution to the immunity factor, the team leveraged previous studies in which scientists actively monitored people’s social behavior. They also looked at actual epidemic dynamics, determining the immunity factor most consistent with data on COVID-19-related hospitalizations, intensive care unit admissions, and daily deaths in NYC and Chicago. For example, when the susceptible number dropped by 10 percent during the early, fast-paced epidemic in NYC and Chicago, the reproduction number fell by 40 to 50 percent–corresponding to an estimated immunity factor of four to five.

“That’s a fairly large immunity factor, but it’s not representative of lasting herd immunity,” said Tkachenko. “On a longer timescale, we estimate a much lower immunity factor of about two. The fact that a single wave stops doesn’t mean you’re safe. It can come back.”

This temporary state of immunity arises because population heterogeneity is not permanent; people change their social behavior over time. For instance, individuals who self-isolated during the first wave–staying home, not having visitors over, ordering groceries online–subsequently start relaxing their behaviors. Any increase in social activity means additional exposure risk.

“The epidemic has been with us a year now,” said Maslov. “It’s important to understand why it has been here for such a long time. The gradual change in social behavior among individuals partially explains why plateaus and subsequent waves are occurring. For example, both cities avoided a summer wave but experienced a winter wave. We attribute the winter wave to two factors: the change in season and the waning of transient collective immunity.”

With vaccination becoming more widespread, the team hopes we will be spared from another wave. In their most recent work, they are studying epidemic dynamics in more detail. For example, they are feeding statistics from “superspreader” events–gatherings where a single infected person causes a large outbreak among attendees–into the model. They are also applying their model to different regions across the country to explain overall epidemic dynamics from the end of lockdown to early March 2021.

This work was supported by the DOE Office of Science; University of Illinois System Office, the Office of the Vice-Chancellor for Research and Innovation, the Grainer College of Engineering, and the Department of Physics at UIUC; DOE Computational Science Graduate Fellowship; and National Science Foundation Faculty Early Career Development (CAREER) Program. This research was carried out as part of a CFN user program. The Illinois Department of Public Health, through a Data Use Agreement with Civis Analytics, supplied data for the calculations. The calculations were carried out on the Illinois Campus Cluster, a computing resource operated by the Illinois Campus Cluster Program in conjunction with the National Center for Supercomputing Applications, which is supported by funds from UIUC.