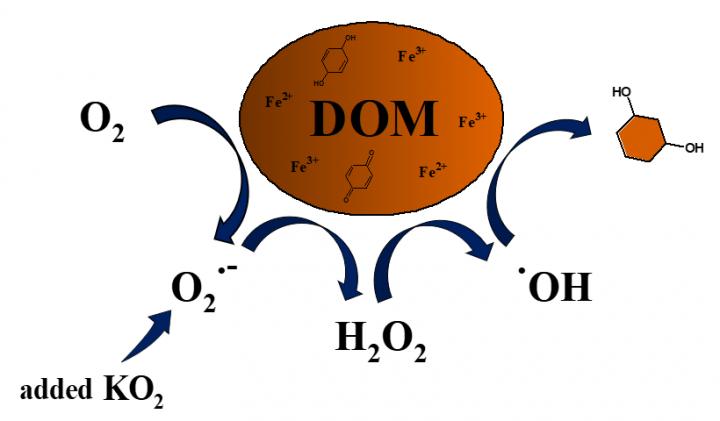 According to a study published in Water Research in April 2020, superoxide produces hydroxyl radicals in lake water. Hydroxyl radicals break down poorly biodegradable organic matter such as humic substances and anthropogenic pollutants.

In the aquatic environment, microbes, light and reduced compounds produce superoxide. Superoxide is a reactive oxygen species but relatively unreactive against organic compounds in water despite the prefix ‘super’ in its name.

Superoxide however can initiate a pathway of redox reactions. It can reduce ferric iron to ferrous one or be reduced itself to hydrogen peroxide. The Fenton reaction between ferrous iron and hydrogen peroxide produces hydroxyl radicals, very effective oxidants of organic matter. According the above mentioned reaction pathway, the production of one hydroxyl radical requires three superoxide ions.

“Superoxide is ubiquitously produced in lake water and thus a potential source of hydroxyl radicals.” says Dr. Anssi Vähätalo from University of Jyväskylä, “We tested the reactivity of superoxide with the ferric iron complexed with dissolved organic matter.”

Recent studies have shown that nearly all microbes produce extracellular superoxide. Because microbes are ubiquitous so is superoxide too. In surface waters, iron is associated with dissolved organic matter and can catalyze production of hydroxyl radicals from superoxide. Superoxide-driven production of hydroxyl radicals is likely an important part of self-cleaning mechanisms that breaks down refractory organic matters in lakes.

The extreme reactivity of hydroxyl radicals is beneficial in the advance oxidation techniques that aim for the breakdown of anthropogenic pollutants.

“In our study, the produced amount of hydroxyl radical was several times larger than the amount of superoxide introduced into the solution of iron associated with humic substances. This type of autocatalysis of hydroxyl radicals from superoxide is naturally a high desirable property in advance oxidation techniques and worth of further studies”, Vähätalo explains.