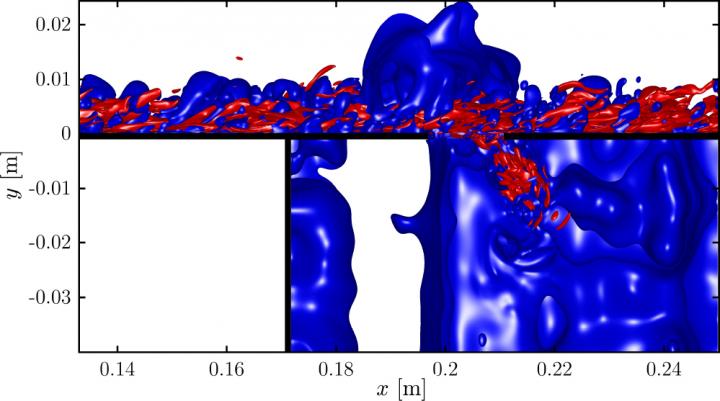 Noise-cancelling headphones have become a popular accessory for frequent flyers. By analyzing the background frequencies produced by an airplane in flight and generating an “anti-noise” sound wave that is perfectly out of phase, such headphones eliminate disturbing background sounds. Although the headphones can’t do anything about the cramped seating, they can make watching a film or listening to music in flight nearly as enjoyable as at home.

To minimize the disturbing noise caused by loud machines like cars, ships, and airplanes, acoustic engineers use many strategies. One technology, called a Helmholtz cavity, is based on a similar concept to that used in noise-cancelling headphones. Here, engineers build a resonating box that opens to a slit on one side. As air passes over the slit, the box vibrates like a church organ pipe, producing a tone. By adjusting the size and shape of the cavity and its slit, acoustic engineers can tune it to produce a specific tone that — like the headphones — cancels a dominant, irritating sound produced by machinery.

Historically, the process of tuning a Helmholtz resonator was a brute force undertaking involving costly and time-consuming trial and error. Engineers had no other choice but to physically build and test many different geometries experimentally to find an optimal shape for a specific application, especially in an environment of turbulent flow.

Today, however, high-performance computing offers the potential to undertake such tests virtually, making the design process faster and easier.

In a paper just published in the journal Acta Mechanica, Lewin Stein and Jörn Sesterhenn of the TU Berlin describe a new analytical model for sound prediction that could make the design of Helmholtz cavities cheaper and more efficient. The development of the model was facilitated by a dataset produced using direct numerical simulation at the High-Performance Computing Center Stuttgart (HLRS). The analytical model can predict, in a way that is more generally applicable than before, a potential Helmholtz cavity’s sound spectrum as turbulent air flows over it. The authors suggest that such a tool could potentially be used to tune Helmholtz cavities to cancel out or to avoid any frequency of interest.

Simulation approaches all the scales of nature

When moving air passes over the slit of a Helmholtz cavity, its flow becomes disrupted and turbulence is enhanced. Vortices typically arise, detaching from the slit’s upstream edge. Together they form a sheet of vortices that covers the slit and can interact with the acoustic vibrations being generated inside the cavity. The result is a frequency-dependent damping or excitation of the acoustic wave as air passes through this vortex sheet.

In the past it was difficult to study such interactions and their effects numerically without making crude approximations. For the first time, Stein’s simulation realistically integrates turbulent and acoustic phenomena of a Helmholtz cavity excited by a turbulent flow passing over its slit. At an unprecedented resolution, it makes it possible to track the flow-acoustic interaction and its implications for the cavity’s resonance.

This achievement is possible using a method called direct numerical simulation (DNS), which describes a gas or liquid at a fundamental level. “I’m using the most complex form of fluid equations — called the Navier-Stokes equations — to get as close as possible to the actual phenomenon in nature while using as little approximation as necessary,” Stein says. “Our DNS enabled us to gain new insights that weren’t there before.”

Whereas a physical experiment is spatially limited and can only track a few physically relevant parameters, each individual DNS run provides a 20-terabyte dataset that documents all flow variables at all time steps and spaces within the mesh, delivering a rich resource that can be explored in detail. Stein says that running the simulation over this time period provided a good compromise between being able to set up a reliable database and getting results in a practical amount of time.

Once the details of the acoustic model were developed, the next challenge was to confirm that it could predict acoustic properties of other Helmholtz cavity geometries and airflow conditions. By comparing the extrapolated model results with experimental data provided by Joachim Golliard at the Centre de Transfert de Technologie du Mans in France, Stein found that the model did so with great accuracy.

The model reported in the paper is optimized for low speed airflows and for low frequencies, such as those found in ventilation systems. It is also designed to be modular so that a cavity that includes complex materials like foam instead of a hard wall can be investigated as well. Stein anticipates that gaining more computing time and access to faster supercomputers would enable him to numerically predict a wider range of potential resonator shapes and flow conditions.

Having recently completed his PhD and now working as a postdoc at the Institute of Fluid Dynamics and Technical Acoustics in the group of Prof. Sesterhenn (TU Berlin), Stein foresees some attractive opportunities to cooperate with industrial partners and possibly to apply his model in real-life situations. “Although I studied theoretical physics,” he explains, “it is fulfilling to work on problems that reach beyond pure academic research and can be applied in industry, where people can potentially profit from what you’ve accomplished. This latest paper is an opportunity to prove the utility and applicability of our work. It’s a great moment after years of working on a PhD.”