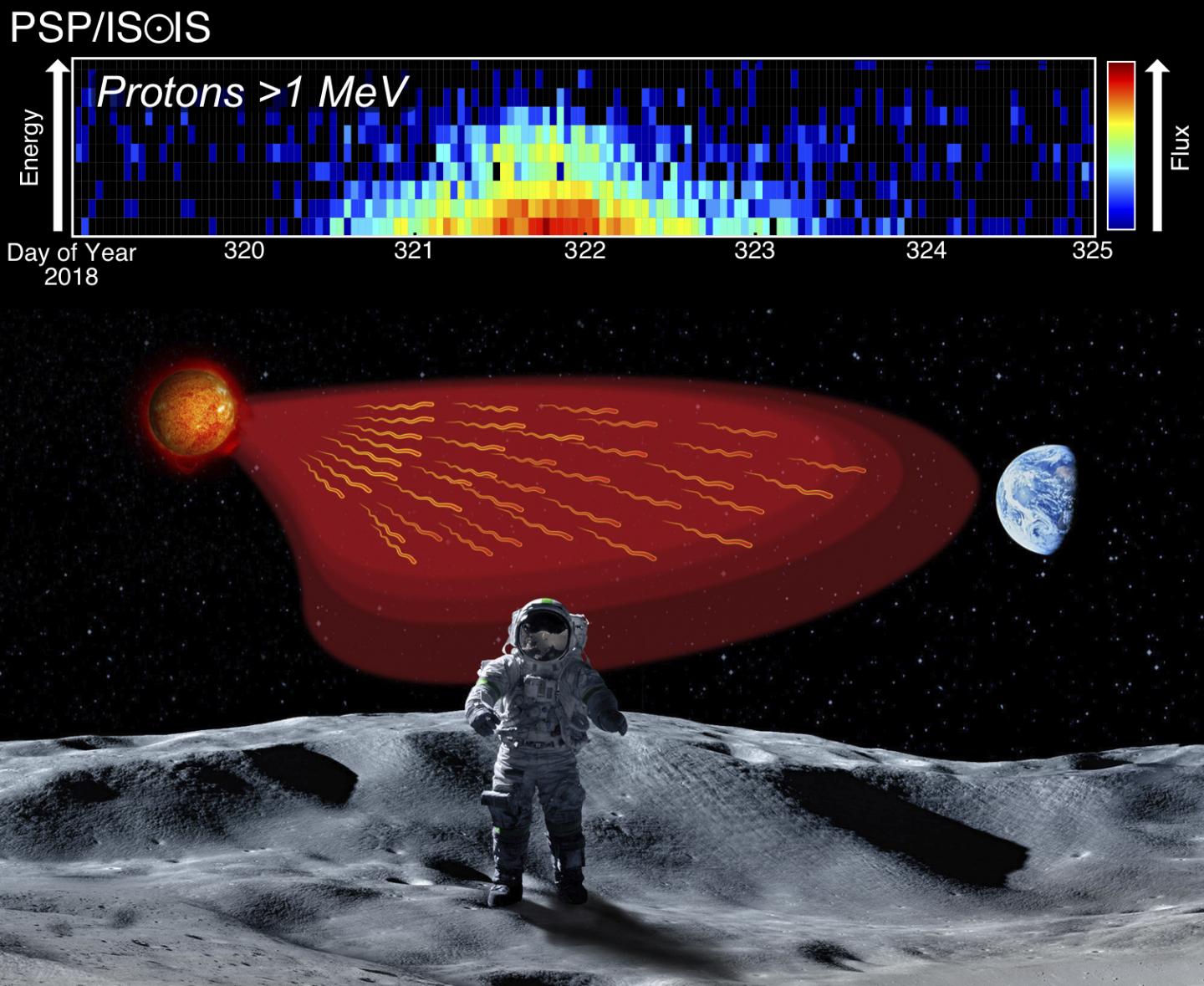 Outbursts of energetic particles that hurtle out from the sun and can disrupt space communications may be even more varied and numerous than previously thought, according to results from the closest-ever flyby of the sun.

The new findings, which help us understand the sun’s activity and ultimately could provide an early warning for solar storms, come from one of the four instrument suites aboard NASA’s Parker Solar Probe, a spacecraft that has completed its first passes near the fiery orb. Results from all four suites appear today in a set of articles published in the journal Nature.

The finding that these energetic particle events are more varied and numerous than previously known was one of several discoveries made by the instrument suite known as the Integrated Science Investigation of the Sun (ISOIS), a project led by Princeton University that involves multiple institutions as well as NASA.

“This study marks a major milestone with humanity’s reconnaissance of the near-sun environment,” said David McComas, the principal investigator for the ISOIS instrument suite, a Princeton professor of astrophysical sciences and the vice president for the Princeton Plasma Physics Laboratory. “It provides the first direct observations of the energetic particle environment in the region just above the sun’s upper atmosphere, the corona.

“Seeing these observations has been a continuous ‘eureka moment,'” McComas said. “Whenever we receive new data from the spacecraft, we are witnessing something that no one has ever seen before. That is about as good as it gets!”

Highly energetic particles can disrupt communications and global positioning systems (GPS) satellites. These streams of particles, made up primarily of protons, have two sources. The first is from outside our solar system, generated when exploding stars release streams of particles known as cosmic rays. The other is our sun. Both can damage the electrical systems of spacecraft and are forms of radiation that can harm astronauts’ health.

Understanding these particles could improve space weather forecasts and give early warning of the massive storms that can disrupt Earthly communications and space travel.

“The answer to questions about how energetic particles form and accelerate is incredibly important,” said Ralph McNutt, who oversaw the building of the lower energy of the suite’s two instruments and is chief scientist in the Space Exploration Sector at APL. “These particles affect our activities on Earth and our ability to get our astronauts out into space. We are making history with this mission.”

Due to their speed, the particles act as an early warning signal for space weather, said Jamey Szalay, an associate research scholar in the Department of Astrophysical Sciences at Princeton who leads the data visualization efforts for ISOIS. “These particles are moving fast, so if there is a big solar storm on its way, these particles are the first indicators.”

Most previous studies of solar energetic particles relied on detectors located in space about the same distance from the Sun as is the Earth — 93 million miles from the sun. By the time the particles get to those detectors, it is hard to track where they came from, because the particles from various sources have interacted and intermixed.

“It’s a bit like cars coming from crowded tunnels and bridges and spreading out onto interstate highways,” McComas said. “They get faster as they move away, but they also get mixed and interact in ways that it is impossible to tell who came from where as you move farther and farther away from the sources.”

In its first trips around the sun, the Parker Solar Probe travelled twice as close to the sun as any previous spacecraft has ever been. At its closest, the spacecraft was 14 million miles — or 35 solar radii, which is 17.5 widths of the sun — from the fiery surface.

Getting close to the sun is essential for unraveling how these particles form and gain high energies, said Eric Christian, the deputy principal investigator on ISOIS and a senior research scientist at NASA Goddard. “It is like trying to measure what is happening in a mountain by studying the base of the mountain. To know what is happening, you have to go where the action is: You have to go up on the mountain.”

A potential concern of the researchers was that the sun’s 11-year cycle of activity is presently at a low. But the low activity level turned out to be an advantage.

“The fact that the sun was quiet allowed us to analyze events that are extremely isolated,” said Nathan Schwadron, a professor of physics and astronomy and the head of the ISOIS science operation center at the University of New Hampshire. “These are events that haven’t been seen from farther away because they are just clobbered by the solar wind activity.”

Another observation from ISOIS was particle activity indicating a sort of solar wind traffic jam, which happens when the solar wind suddenly slows down, causing fast-moving solar wind to pile up behind it and forming a compressed region of particles. This buildup, which astrophysicists call a co-rotating interaction region, occurred out beyond Earth’s orbit and sent high energy particles back toward the sun where they were observed by ISOIS.

Researchers are eager to understand the mechanisms by which the sun accelerates particles to high speeds. ISOIS’s detection of each particle’s identity — whether it is hydrogen, helium, carbon, oxygen, iron or another element — will help researchers further explore this question.

“There are two kinds of acceleration mechanisms, one that occurs in solar flares when magnetic fields reconnect, and another that occurs when you get shocks and compressions of the solar wind, but the details of how they cause particle acceleration are not that well understood,” said Mark Wiedenbeck, a principal scientist at NASA’s Jet Propulsion Laboratory, who oversaw the development of the higher energy instrument in the ISOIS suite. “The composition of the particles is a key diagnostic to tell us the acceleration mechanism.”

ISOIS made its third brush by the sun on Sept. 1, and will make its next on Jan. 29, 2020. As the mission continues, the satellite will make a total of 24 orbits, each time getting closer to the solar surface, until it is roughly five sun-widths from the star. The researchers hope that future flybys will reveal insights into the source of the energetic particles. Do they start as “seed particles” that go on to attain higher energies?

Jamie Sue Rankin, a postdoctoral researcher at Princeton working in the McComas group, began working on the higher energy ISOIS instrument as a graduate student at Caltech.

“It has been neat to see this whole process develop over the past decade,” Rankin said. “It is like surfing a wave: We built these instruments, made sure they were working, made adjustments to make sure the calibrations were right — and now comes the exciting part, answering the questions that we set out to address.

“With any spacecraft, when you go out into space, you think you know what to expect, but there are always wonderful surprises that complicate our lives in the best way,” she said. “That is what keeps us doing what we do.”

A tale of two cities: Is air pollution improving in Paris and London?