Sunil Kumar, provost and senior vice president for academic affairs at Johns Hopkins University, has been named the next president of Tufts University by the Board of Trustees. An expert in operations management with a Ph.D. in electrical engineering, Kumar was previously dean of the University of Chicago Booth School of Business. 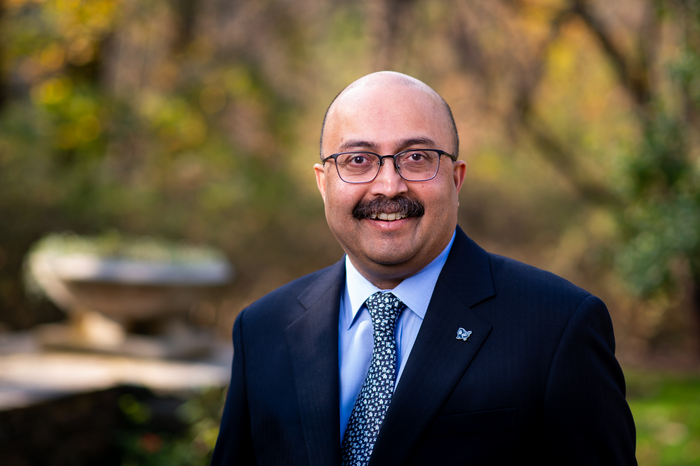 Sunil Kumar, provost and senior vice president for academic affairs at Johns Hopkins University, has been named the next president of Tufts University by the Board of Trustees. An expert in operations management with a Ph.D. in electrical engineering, Kumar was previously dean of the University of Chicago Booth School of Business.

He will succeed President Anthony P. Monaco next summer. Monaco announced in February that he would step down in 2023 after serving 12 years as the university’s leader.

“Sunil Kumar brings to Tufts a lifelong commitment to excellence in higher education and an exceptionally strong record as a leader, teacher, and colleague,” said Peter Dolan, A78, A08P, chair of the Board of Trustees and chair of the presidential search committee. “He will be an outstanding successor to President Monaco, who has strengthened Tufts in so many ways in the past 11 years. Sunil’s commitment to research and learning, along with civic engagement and innovation, will help bolster Tufts’ mission to improve the world.”

As provost at Johns Hopkins in Baltimore, Kumar oversees the academic mission of the university’s nine schools, and has focused on increasing interdisciplinary research and education, enhancing the student experience, and promoting diversity, equity, and inclusion efforts.

“During the search process, I was very impressed with Dr. Kumar’s leadership style,” says Bree Aldridge, associate professor of molecular biology and microbiology at Tufts University School of Medicine and a member of the search committee. “He is a perceptive listener and analyst. He is humble and will have you laughing in no time when you talk with him. His work demonstrates his commitment to the execution of transformative ideas. I am so excited that he is joining our community and look forward to working with him in the coming years.”

Johns Hopkins President Ron Daniels says that Kumar “has been an extraordinary partner to me and the entire Johns Hopkins community as provost, bringing an ethos of collaborative leadership and an uncompromising commitment to excellence in everything he pursues. In Sunil, Tufts gains a seasoned academic leader devoted to enhancing the research enterprise, building an exceptional student experience, and ensuring that every member of the community has the opportunity and the supports they need to pursue their aspirations,” he says.

“We were so fortunate to have someone of Sunil’s unique analytical capability and profound humanity to help bring us through the challenges and upheavals of the pandemic, and I can think of no one better suited to lead Tufts into the future,” says Daniels.

Ellen MacKenzie, dean of the Johns Hopkins Bloomberg School of Public Health, adds that Kumar “is an amazing academic leader who has been a champion for the university and its academic divisions. As dean, I have had the privilege of working with him closely and benefitting from his sage advice and wise counsel.”

Kumar, whose father was a police officer, was born and raised in India, graduating in 1990 with a bachelor’s in engineering from Mangalore University. He received a master’s degree in 1992 in computer science and automation from the Indian Institute of Science in Bangalore. While there, he met a visiting professor from the University of Illinois at Urbana-Champaign, who recruited him for a doctoral program in electrical engineering. He received his Ph.D. from the University of Illinois in 1996.

Kumar began his academic career teaching at the Stanford University Graduate School of Business, where he was later the Fred H. Merrill Professor of Operations, Information and Technology. After a dozen years at Stanford, he was named dean of the University of Chicago Booth School of Business. In 2016, he became provost and senior vice president at Johns Hopkins.

When he was a young assistant professor at Stanford, he says, he was struck by the fact that he was getting paid to do what he loved. “I’ve never lost that kind of awe and wonder about the academic enterprise, and I’m happiest in it,” he says.

As part of his research in operations management, he builds mathematical models of systems and examines “how one can influence those systems to achieve societally valuable outcomes,” he says. “Problems can be very hard, but if you’re willing to settle for an almost-best outcome, the problem becomes a lot easier,” he says. “I have built tools that are guaranteed to find the almost-best solution in many problems.”

What’s important in these issues, he says, “is how to abstract away from details to get to the big picture. Mathematical modelers tend to learn that quickly in their careers, and that’s helped me a great deal.” Another foundation of his work is “a firm reliance on evidence.”

Kumar was attracted to Tufts because of its mission to serve “not only the people within its confines—its students, faculty, and staff—but society at large,” he says. When he was interviewing with the presidential search committee, which consisted of 18 people from across the university, he noticed that they “had a quiet confidence about them,” he says. “They wanted Tufts to genuinely be the light on the hill, and somehow it felt like a perfect fit.”

As he looks ahead to taking up the presidency of the university on July 1 next year, he is focused on “how to make the Tufts experience available to more people, and how to make sure the experience is even better.” He also wants to increase the impact of research done at the university and ensure that it helps society even more “in the here and now.”

Tufts, he says, already has a reputation that is “kept high and soaring by its alumni and faculty,” noting that the university “is extremely well positioned to educate students to directly address the challenges of the future. We cannot afford to step back from society’s problems today but must fully engage in them.”

Madeline Fabela, E23, a member of the search committee, says that she thought Kumar was the best candidate for the presidency for many reasons. “I’d highlight his ability to solve problems, engage with others, and even his sense of humor,” she says. “As a student, it was difficult to know exactly what a candidate needed to be successful in the job, but he made it easy to make a clear decision.”

One of Kumar’s priorities will be to develop ways “to ensure that we have even more resources to make Tufts as affordable as we possibly can,” he says.

He knows the value of financial aid in higher education. For his graduate studies at the University of Illinois, he received generous financial support. “It would not have been possible for me as a son of a police officer to do anything else,” he says. “Affordability is not a theoretical concept for me. I hope I represent an example of somebody who benefited from an institution opening its doors wide and I would like even more people to have the same opportunity.”

It’s not just financial aid that is crucial, but also “investments in student support, in curriculum development, and in what at Hopkins we call life design, which is our way of thinking about how best we can launch our students on their future careers.”

Kumar says that “diversity and inclusion are indispensable values. They don’t need to be justified on utilitarian grounds.” That said, he notes that the diversity of the student body is “extremely valuable to all the students.”

The first person of color to lead Tufts University, Kumar says that “on the diversity and inclusion front, it is not enough to talk the talk. We also have to make sure that we operationalize our values, and sufficiently resource them so that we can execute on those values and make sure that Tufts is indeed as inclusive as it can be.”

At Johns Hopkins, he helped lead an effort to “improve us as a university on all dimensions of diversity, equity, and inclusion,” he says. He led the effort to bring to fruition the Vivien Thomas Scholars Initiative, which sought to increase the number of Ph.D. students from underrepresented groups in STEM fields. Another effort he spearheaded was the Fannie Gaston-Johansson program, which helps recruit small groups of faculty in specific topic areas to significantly add to diversity in those areas.

“The search committee was so impressed with Dr. Kumar. He has had great success working in complex universities,” says James Glaser, dean of the School of Arts and Sciences, professor of political science, and a member of the search committee.

“He knows our broad intellectual terrain—from engineering and business to the health sciences to the arts, humanities, and social sciences,” Glaser says. “His personal history gives him a global perspective that is important to us. And his warmth, humor, and humanity will win over the Tufts community very quickly.”

As a young engineering student, Kumar received an excellent education, he says, but not one “designed to produce well-rounded individuals.” When he moved to Illinois, he discovered through the library what he had missed by not having a liberal arts education.

Now he continues to try to round himself out intellectually, for instance by reading a recent book on the Italian Renaissance and the foundation of academic humanities. He has what he calls an amateur’s enthusiasm for the humanities.

At Johns Hopkins, he’s tried to strengthen the humanities, he says, for example by helping build out the expansion of the Miller Department of Philosophy.

It is “essential that there be a liberal arts component to all education,” he says. “What matters is to develop the mind and to strengthen the heart. And for that liberal arts education is essential.”