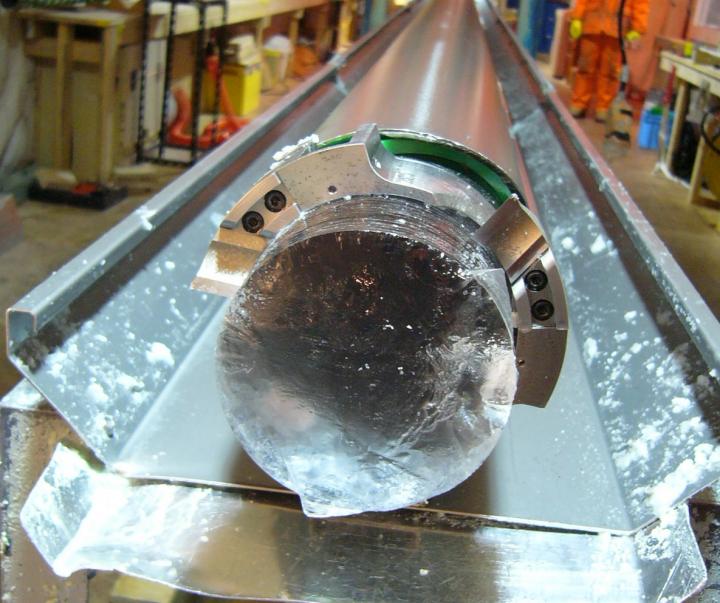 Contrary to conventional wisdom, sulphur production by tiny marine algae decreased during glacial periods, and is more closely linked to climate than previously thought, according to latest research by scientists in Japan. A clearer understanding of the link between the climate and marine phytoplankton, the microscopic single-celled algae that live in the surface waters of the ocean, can help scientists incorporate these impacts in future climate models.

Their findings were published on July 19, 2019 in Nature Communications.

Sulphur produced by marine phytoplankton affects the balance between incoming energy from the sun and the outgoing energy the Earth reflects back into space. It may also be an indicator of primary productivity by photosynthesizing phytoplankton in the Southern Ocean. Phytoplankton, which also plays an important role in removing carbon dioxide from the atmosphere, can therefore significantly influence climate.

Marine phytoplankton, like land plants, are primary producers at the bottom of the food chain. Through photosynthesis, phytoplankton absorb carbon dioxide (CO2) and produce organic carbon that ultimately supports the entire marine food web. As a result, CO2 is removed from the surface waters and eventually getting bound up in sediments at the bottom of the ocean. This is called “export production,” which is measured in units of carbon.

Marine phytoplankton emit dimethylsulphide, or DMS, an organic sulphur-containing compound that gives the sea its distinct smell. When oxidized, DMS can produce sulphur aerosols that serve as cloud condensation nuclei that play an important role in cloud formation. Increased sulphur therefore contributes to Earth cooling both by scattering radiation and by reflecting radiation back out to space through the albedo affect.

DMS is the most abundant biological sulphur compound emitted into the atmosphere and is thought to significantly influence the Earth’s climate and possibly also play a role in keeping the Earth in a state of equilibrium. Its contribution to climate is complex and needs to be fully understood. Examining sulphur and methanesulphonate, the oxidized products of dimethylsuphide, in Antarctic ice cores provides a useful tool for investigating the link between the sulphur cycle and climate.

It was previously believed that marine phytoplankton were the dominant source of non-sea-salt sulphur over glacial-interglacial cycles, with terrestrial sources only contributing a small portion. Yet, the contribution from terrestrial sources can be much more significant during glacial periods when the amount of dust increases.

“Previous ice-core studies in Antarctica, which have assumed that the majority of non-sea-salt sulphate originates from DMS emissions produced by phytoplankton, do not show a link between marine phytoplankton and sulphur emissions, and therefore primary productivity, and climate,” said Professor Kumiko Goto-Azuma a research scientist with the National Institute of Polar Research, Research Organization of Information and Systems, and the Department of Polar Science, Graduate University for Advanced Studies (SOKENDAI) in Japan.

“This is contradictory to marine sediment records which show increased export production in the Antarctic Zone of the Southern Ocean, suggesting increased primary productivity. We wanted to solve this puzzle and see if the previous hypothesis derived from ice-core studies is correct.”

According to Goto-Azuma, new ice core records obtained at Dome Fuji in East Antarctica, spanning the last 720,000 years, show that a large portion of non-sea-salt sulphate, which was traditionally used as a representative of marine phytoplankton sulphate, likely originates from terrestrial dust during glacial periods.

The next step is “to investigate links between climate, marine phytoplankton sulphate, and CO2 through climate and atmospheric chemistry modeling based on our revised calculation of DMS-derived sulphate,” said Goto-Azuma.

The NIPR engages in comprehensive research via observation stations in Arctic and Antarctica. As a member of the Research Organization of Information and Systems (ROIS), the NIPR provides researchers throughout Japan with infrastructure support for Arctic and Antarctic observations, plans and implements Japan’s Antarctic observation projects, and conducts Arctic researches of various scientific fields such as the atmosphere, ice sheets, the ecosystem, the upper atmosphere, the aurora and the Earth’s magnetic field. In addition to the research projects, the NIPR also organizes the Japanese Antarctic Research Expedition and manages samples and data obtained during such expeditions and projects. As a core institution in researches of the polar regions, the NIPR also offers graduate students with a global perspective on originality through its doctoral program. For more information about the NIPR, please visit: https://www.nipr.ac.jp/english/

Why do birds migrate at night?