Stereochemistry, or the study of spatial arrangements of the atoms in a molecule, is a highly explored subdiscipline of organic chemistry. It has led to the synthesis of numerous chiral compounds—compounds with non-superimposable mirror images or enantiomers—which have found applications in fields ranging from biosensing to nanotechnology and drug delivery. For instance, deuterated (deuterium-containing) isotopic chiral compounds, most of which bear an asymmetrical carbon atom, are widely used as probe molecules for the mechanistic study in biochemical and synthetic reactions. 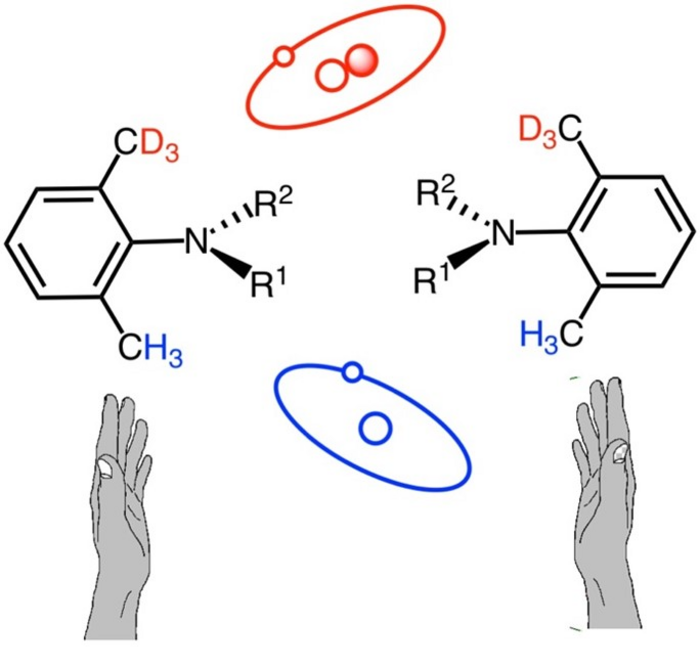 Stereochemistry, or the study of spatial arrangements of the atoms in a molecule, is a highly explored subdiscipline of organic chemistry. It has led to the synthesis of numerous chiral compounds—compounds with non-superimposable mirror images or enantiomers—which have found applications in fields ranging from biosensing to nanotechnology and drug delivery. For instance, deuterated (deuterium-containing) isotopic chiral compounds, most of which bear an asymmetrical carbon atom, are widely used as probe molecules for the mechanistic study in biochemical and synthetic reactions.

The detection of isotopic chiral compounds is generally difficult owing to the minute differences between the chemical and physical properties of their H and the D atoms. In the case of atropisomers, this difficulty is enhanced further, due to their low rotational stability and the spatial distance between their H and D atoms.

Recently, a team of researchers from Japan, including Professor Osamu Kitagawa of Shibaura Institute of Technology and his students Shota Miwa and Ryunosuke Senda, conducted a study to synthesize isotopic atropisomers with high rotational stability and optical purity. Their paper, published in The Journal of Organic Chemistry on October 10, 2022 was chosen as one of the four featured articles of 2022, from over a thousand publications in this journal.

“I have always been interested in preparing organic molecules with unique structures. I was particularly curious about the verification of rotationally stable isotopic atropisomers,” says Dr. Kitagawa while discussing his motivation behind the study.

For the study, the team used N—C axially chiral 3-(2-bromo-4,6-dimethylphenyl)-2-ethylquinazolin-4-one—a racemic mixture, i.e., a mixture that contains equal amounts of left and right enantiomers. First, they conducted kinetic optical resolution of the racemic mixture through a chiral palladium-catalyzed hydrodebromination reaction followed by optical purification to get optically pure enantiomers. Subsequently, Suzuki-Miyaura cross-coupling of the enantiomers with CD3B(OH)2 gave the desired 3-(2-CD3-6-methylphenyl)quinazolin-4-ones possessing a slight optical rotation. However, since the prepared enantiomers could not be separated through high-performance liquid chromatography (HPLC) using a chiral column, their optical purity and rotational stability were not determined. This led the team to prepare the diastereomeric quinazolinone derivatives.

As a result, the diastereomeric 3-(2-trideuteriomethyl-4,6-dimethylphenyl)-2-(1-phenylpropan-2-yl)quinazolin-4-ones with an atropisomerism and chiral carbon were prepared.

Through proton nuclear magnetic resonance (NMR) measurements, the team detected a clear difference of ortho-methyl hydrogens between the diastereomers (the isotopic atropisomerism based on CH3/CD3 discrimination). In addition, they found that the prepared diastereomeric quinazolinones have high enantio- and diastereomeric purity and high rotational stability.

“Our work is the first to demonstrate the asymmetric synthesis of isotopic atropisomers and to verify rotationally stable isotopic atropisomerism. These results might be too preliminary to contribute to real-life applications soon. However, I sincerely hope that more scientists get inspired by our work and contribute to similar research,” concludes Dr. Kitagawa, while discussing the relevance of these findings.

Here’s hoping that we continue to witness the preparation of unique organic compounds through exceptional research!

About Shibaura Institute of Technology (SIT), Japan
Shibaura Institute of Technology (SIT) is a private university with campuses in Tokyo and Saitama. Since the establishment of its predecessor, Tokyo Higher School of Industry and Commerce, in 1927, it has maintained “learning through practice” as its philosophy in the education of engineers. SIT was the only private science and engineering university selected for the Top Global University Project sponsored by the Ministry of Education, Culture, Sports, Science and Technology and will receive support from the ministry for 10 years starting from the 2014 academic year. Its motto, “Nurturing engineers who learn from society and contribute to society,” reflects its mission of fostering scientists and engineers who can contribute to the sustainable growth of the world by exposing their over 8,000 students to culturally diverse environments, where they learn to cope, collaborate, and relate with fellow students from around the world.

About Professor Osamu Kitagawa from SIT, Japan
Dr. Osamu Kitagawa completed his PhD in Pharmacy from the Pharmaceutical Sciences Graduate School in 1989. Currently working as a professor at the Shibaura Institute of Technology in Japan, he has contributed to the field of Organic Chemistry for more than 35 years. During this tenure, he has published 100 research papers in eminent scientific journals and has been cited more than 3,700 times by researchers across the globe. His research interests primarily focus include creation of unique stereoisomeric molecules, their stereoselective synthesis and synthetic applications.

The Journal of Organic Chemistry