Results shown in this article were published in a scientific journal of the Nature publishing group, Scientific Reports. 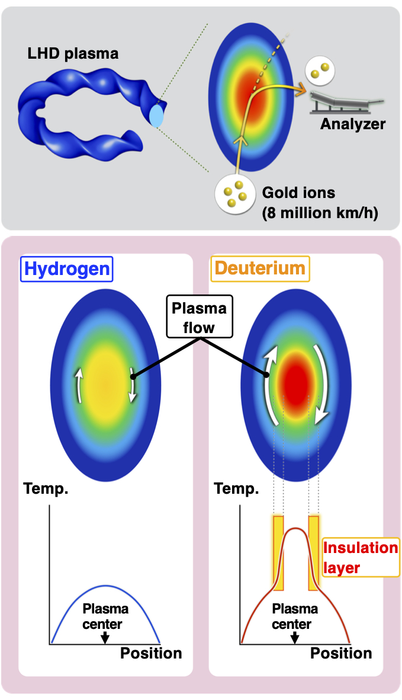 Results shown in this article were published in a scientific journal of the Nature publishing group, Scientific Reports.

To investigate the reason for this difference, the plasma flow at the thermal insulation layer was measured by an advanced plasma diagnostic system, the so-called heavy ion beam probe*. This device injects gold ions into the plasma at a speed of up to 8 million kilometers per hour to obtain information on the plasma interior. Before the present experimental trial, it was challenging to measure the plasma flow near the plasma core with high enough precision. In this experiment, a stronger flow generated in the deuterium plasma was found. This stronger flow was considered to be responsible for reducing the thermal conductivity, playing a role in generating the better thermal insulation layer found in the deuterium plasma.

Assistant Professor Tatsuya Kobayashi said, “This result implies that a further improved thermal insulation layer is expected in future fusion power plants, where the deuterium and the more massive tritium will be used as fuel gasses. In the future, we will also try to understand why the strong flows are formed in high-mass plasmas.”

Glossary: Heavy Ion Beam Probe(*)
Since fusion plasmas reach ultra-high temperatures of nearly 100 million degrees Celsius, it is generally difficult to measure the plasma state. It is particularly difficult to measure the flow near the plasma core where the thermal insulation layer is formed. The heavy ion beam probe injects gold ions from outside, into the plasma, by accelerating them to ultra-high speed. By measuring the energy change of the beam as it passes through the plasma, the local electric potential can be obtained. In a plasma confined by the magnetic field, the change in the electric potential causes a collective motion of plasma particles. Therefore, the electric potential obtained by the heavy ion beam probe can be transferred to the plasma flow.