Success and failure of ecological management is highly variable 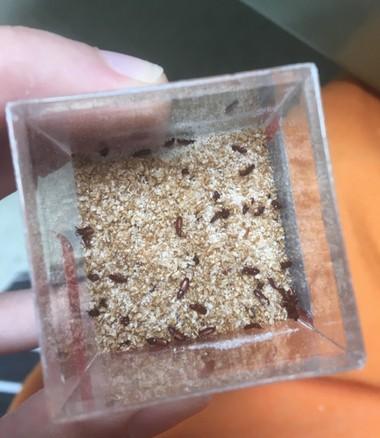 BURLINGTON, VT–What do we really know about reasons attributed to the success or failure of wildlife management efforts? A new study originating out of UVM suggests a disquieting answer: much less than we think.

Led by Dr. Easton White from the University of Vermont, in collaboration with scientists in California and Colorado, the study used mathematical models to first demonstrate that there could be high levels of variability in species management outcomes. They then tested these ideas with an experimental invasive species, the flour beetle (Tribolium confusum).

“In nature, we might only have a single study site we are concerned with managing,” White says. “This means we typically only have a single replicate under study, making it difficult to determine the ultimate cause of management success or failure. The combination of mathematical models and laboratory experiments provide replication and a measure of ecological management variability.”

The team also found that the highest levels of management variability occurred at intermediate levels of management effort. In other words, unless a large amount of effort is used to control a system, we are likely to fail or succeed simply by chance. This is concerning for real systems where we have limited budgets.

“Our results suggest that much of ecological management is bound to succeed or fail simply because of good or bad luck,” notes White. “In our experiment we were able to control the laboratory conditions precisely, reducing variability caused by the environment. Thus, we might expect that managing natural systems might lead to higher levels of variability.”

The team also investigated the combination of different management strategies. To control the invasive species, they tried direct harvesting and controlling the beetle movement. They found that combinations of strategies, as opposed to only using a single strategy, were often more effective.

The study can be found at:

You can read more about this, and related work, at Easton White’s website: https://eastonwhite.github.io/

Scienmag Jun 25, 2019
A review of advances in biochip technology shows it's playing a fundamental role promoting the use of…